The NFIB released its October data on small business optimism this morning.  The headline index was expected to show further deterioration in optimism, and exactly that occurred as the index fell to 91.3 from last month’s reading of 92.1 versus expectations of 91.4.  This month’s reading is off of the spring lows which had surpassed the worst levels from the early stages of the pandemic but remains one of the weakest readings of the past several years. 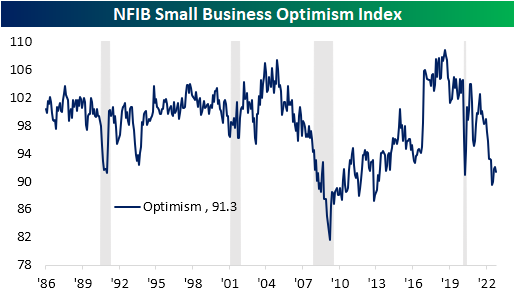 In the table below, we provide a breakdown of each category of the report.  The headline index is now just off the bottom decile of readings as most components are likewise historically depressed. While the report was weak, there were some exceptions with strong showings in labor market metrics like Plans to Increase Employment, Job Openings Hard to Fill, and Compensation. 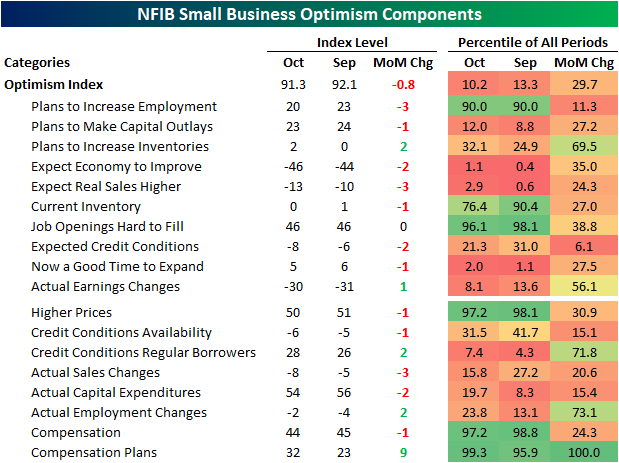 Even though these labor market metrics have remained at very high levels from a historical perspective, they have largely been rolling over for the better portion of the past year.  Hiring plans as well as the percentage of firms reporting cost or quality of labor as their biggest issues are back to similar levels as the year prior to the pandemic.  Meanwhile, actual employment changes are negative (as they have been throughout the pandemic) implying businesses are reporting a net decline in workers. That is in spite of still elevated compensation and a sharp spike higher in compensation plans.  In fact, that index is just shy of the peak from the final months of 2021 after a record 9-point month-over-month jump.  Companies are also reporting job openings remain hard to fill, although that index has also been on the decline alongside hiring plans. This month, the reading was unchanged at 46, the lowest level since June 2021. 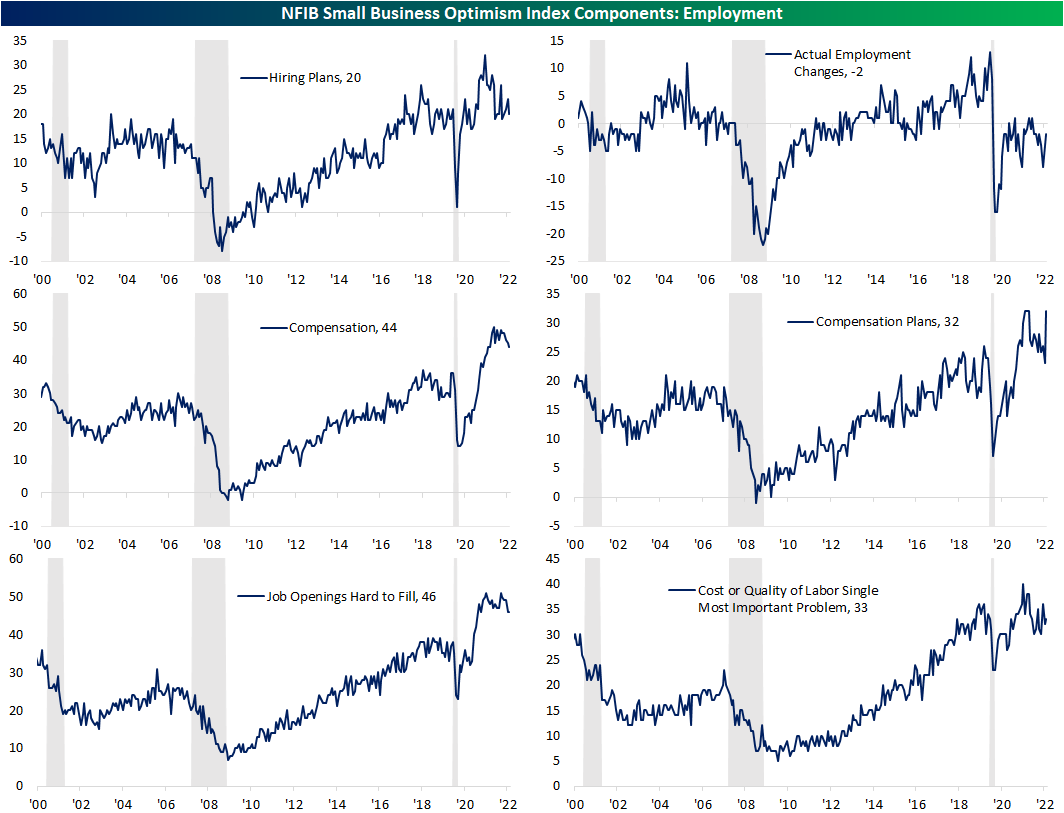 Sales components have experienced far greater degrees of deterioration than employment metrics.  The outlook for general business conditions has rallied back somewhat in the past few months, but it remains well below its historical range. Given the weakness in small businesses’ economic outlook, few report now as an opportune time to expand their businesses.  Actual sales changes dropped to -8 in October which matched August for the weakest showing for sales since August 2020. Back in 2020 though, this index was far lower than it is now.

While the reading on the top line has held up relatively well, high inflation has meant the bottom line has taken a big hit.  A net 30% of small businesses reported earnings have fallen. That reading did improve last month, though, as there have been fewer businesses reporting higher prices. In spite of those improvements, each of those indices has a long way to go until returning to what have historically been more normal levels. 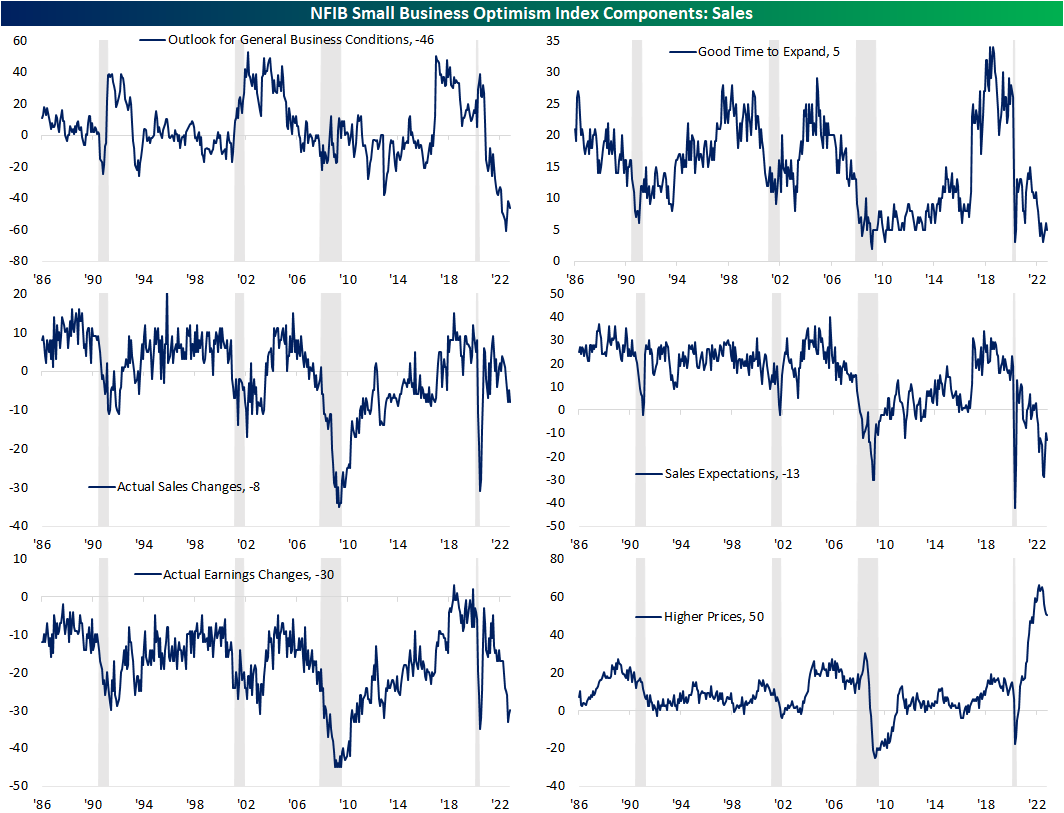 As mentioned above, a historically low share of businesses are reporting positive sentiment on the economy and that has dampened their hopes of expansion.  When questioned on the reason for not expanding, 44% reported economic conditions as the reason.  Another 17% reported economic conditions as the reason for uncertainty on whether or not they would expand.  Aptly coming out on Election Day, we have highlighted in the past the political nature of the NFIB survey.  As such, it should come as little surprise that the next biggest reason for small business hesitancy in expanding has been the political climate. Assuming the survey results react to the current election in a similar way as in the past, a strong election showing for Republicans could provide a boost to small business sentiment and plans for expansion. Finally, given continued high inflation and rates rising to combat it, the next two most widely mentioned reasons to not expand were the cost of expansion and financial conditions and interest rates with a combined 9% of responses   Click here to learn more about Bespoke’s premium stock market research service. 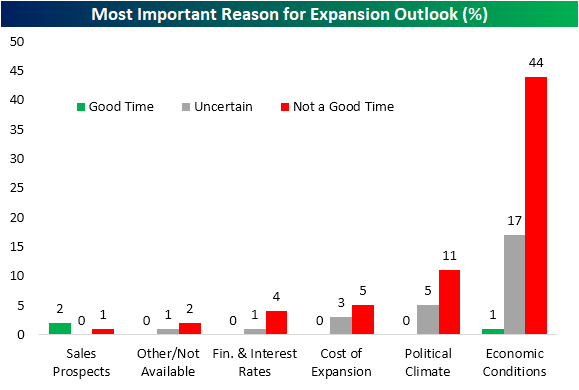