Last Tuesday, the NFIB provided an update on small business sentiment in the month of May.  In April the headline number had fallen down to 90.9 which was the lowest level since March of 2013.  In May, the index rebounded to 94.4.  That 3.5 point increase was the largest one month gain for the index since a 3.7 point increase in November 2017. While an improvement, the index now only remains around similar levels to 2016. 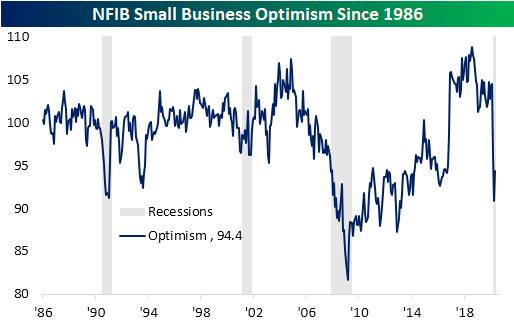 As shown in the table below, breadth in the May report was solid with all but two components of the headline number (Job Openings Hard to Fill and Actual Earnings Changes) rising month over month.  Even with the nice bounce, though, there is still a negative net percentage of respondents reporting optimism for credit conditions, inventories, sales, and earnings. Similarly, poor sales have become one of the most pressing issues for businesses. 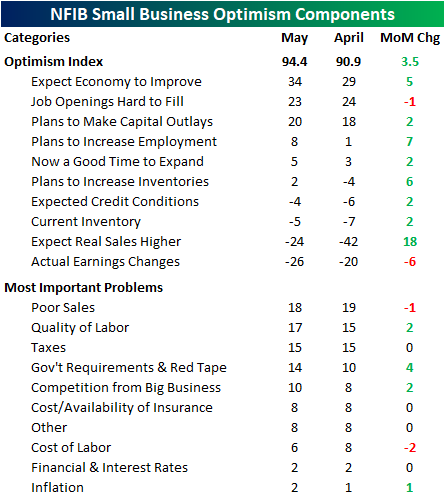 While current optimism remains at the lowest level of the past several years, the index for expected conditions is more positive.  A net percentage of 34% of respondents reported that they expect the economy to be better rather than worse. That is the highest reading since August and July of 2018. 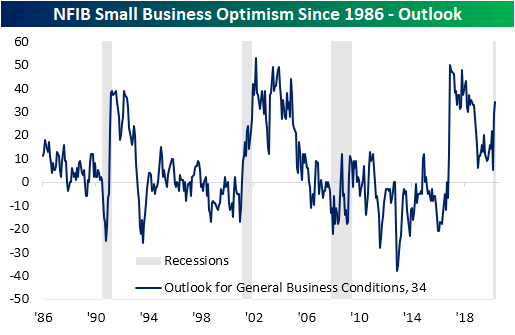 As shown in the charts below, activity indices have been some of the weakest areas of the report.  A net of -19% reported sales were higher which was an 8 percentage point drop from the prior month.  That is the weakest reading for that index in a decade. Bottom lines are also hurting with a net of 26% of respondents reporting lower earnings.  That is a 6 percentage point drop MoM and the weakest level for this index since an equivalent reading in February 2014.  NFIB highlighted that the bulk (46%) of owners reported weak sales as a source of the weak earnings while another 9% reported price changes as another reason.  Meanwhile, a net 2% reported that they plan to accumulate inventories. 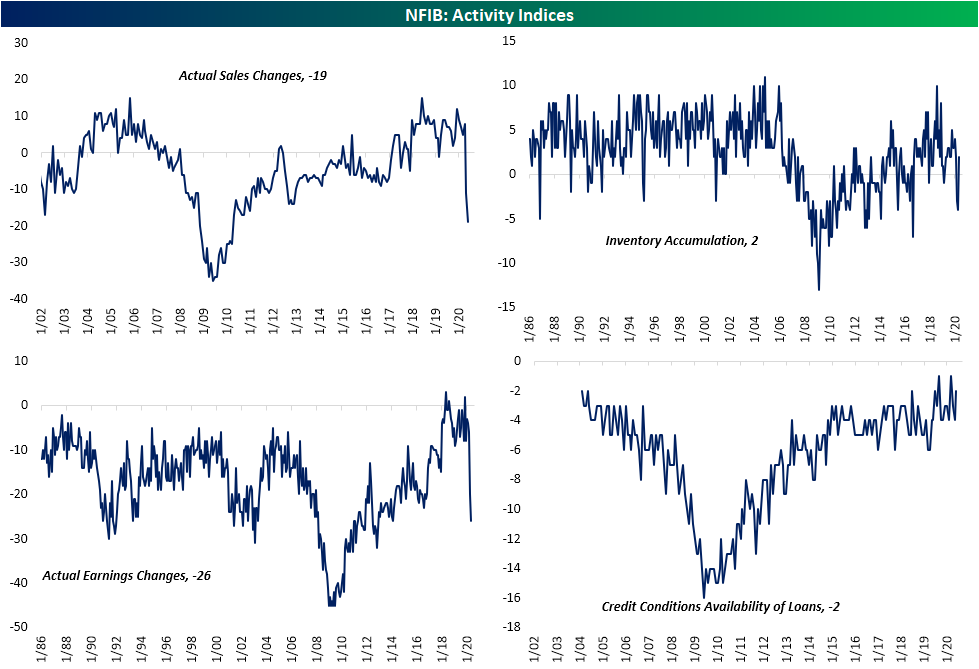 Labor market indices are another weak area.  Some of the only indices to experience sequential declines outside of sales and earnings were labor-related.  For example, the indices for Compensation, Actual Employment Changes, and Job Openings Hard to Fill all were down from April.  Those indices are now at their lowest levels since July 2013, September 2009, and September 2014, respectively. Meanwhile, the outlook is less pessimistic with Hiring Plans and Compensation Plans both ticking higher, though, they too remain at their lowest levels of the past several years. 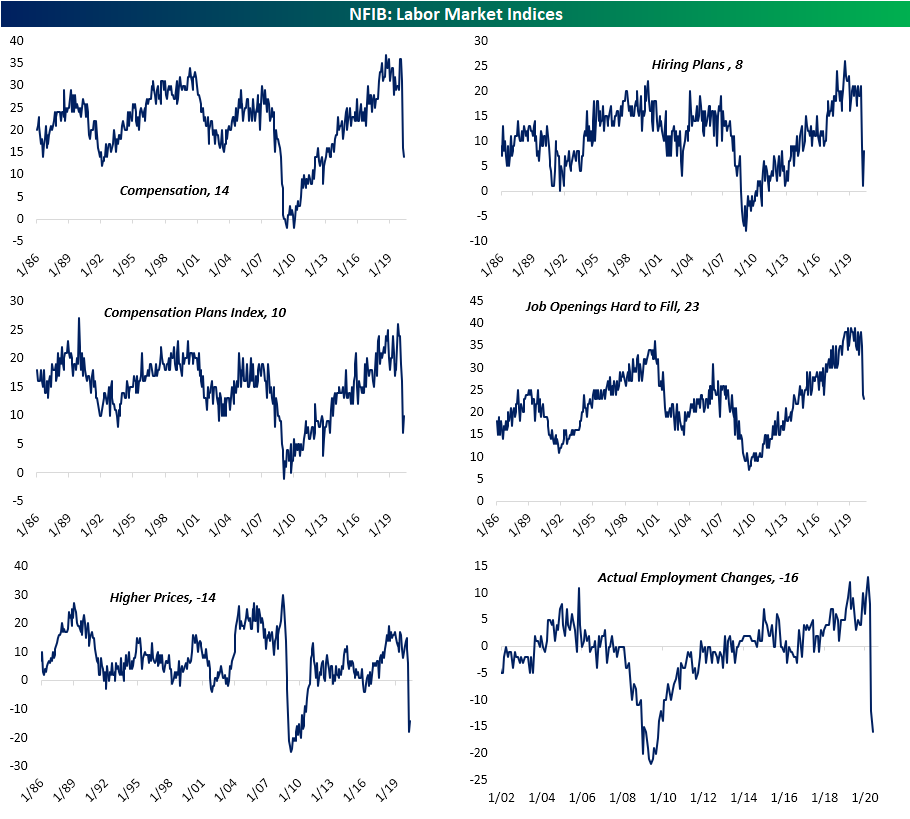 The weakening in labor activity is also showing through what businesses consider their biggest issue. Over the past couple of years, the quality of labor and the cost of labor had become some of the most pressing issues. But that is no longer the case as recent months have seen that trend reverse.  Now 18% reported Poor Sales as the most pressing issue while Quality of and Cost of Labor as the most important issue are around similar levels to 2017. The amount reporting poor sales as the most important issue was actually down 1 percentage point in May but it is still elevated at its highest levels since 2013. Additionally, government red tape remains one of the most important issues though that is not at any multiyear high like Poor Sales.

Leading up to the COVID Crash, “poor sales” was at the bottom of the list when it comes to the biggest problems reported for small businesses.  You know an economy is firing on all cylinders when that is the case.  Conversely, when “poor sales” are the leading issue for small businesses, it obviously represents a major problem.  As shown in the lower right chart below, “poor sales” has indeed spiked as a major issue, but it’s still only half of what was seen at the depths of the Financial Crisis.  It’s a good sign that this reading actually ticked slightly lower in May versus April, and we’ll continue to watch it closely in the coming months as one of our key indicators for the recovery.  Click here to view Bespoke’s premium membership options for our best research available. 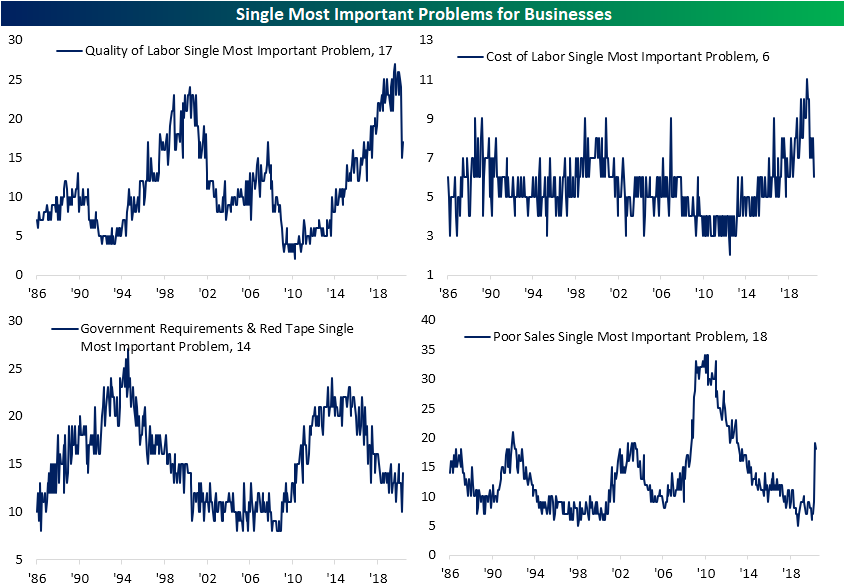