While a number of economic indicators have seen tremendous rebounds off their COVID lows, one that sticks out as a major outlier has been Consumer Confidence; that remained the case in January as well.  In this month’s report, overall confidence rose from 87.1 up to 89.3 compared to expectations for an increase to 89.0.  As illustrated in the chart below, after the initial plunge last Spring, Consumer Confidence has been bouncing up and down for the last ten months at levels well below the pre-Covid peak.

Whether you look at consumer sentiment towards present conditions or the future, it’s a similar picture.  Expectations were already much lower heading into COVID, so they didn’t fall nearly as much, but after the plunge in the Present Situation Index, consumers feel roughly the same about the present as they do about the future.

With all the positive news about the vaccine rollout and the market at record highs, why aren’t consumers more confident?  Chalk it up as a case of “It’s a recession when your neighbor loses his job; it’s a depression when you lose yours.”  As shown in the chart below, the gauge of “Jobs Plentiful” embedded in the Consumer Confidence report remains extremely weak, and if you look closely, it’s also showing some signs of rolling over.  When consumers are worried about hanging on to their jobs, it’s going to be hard for them to be confident.

There have been some crazy moves in the stock market, so we were surprised to see that consumer optimism towards the stock market actually fell this month.  In this month’s survey, just 34.8% of consumers said they expect stock prices to increase, while nearly an equal number expect stock prices to decline.  In this survey, at least, it doesn’t appear as though consumers are anywhere close to irrationally exuberant. 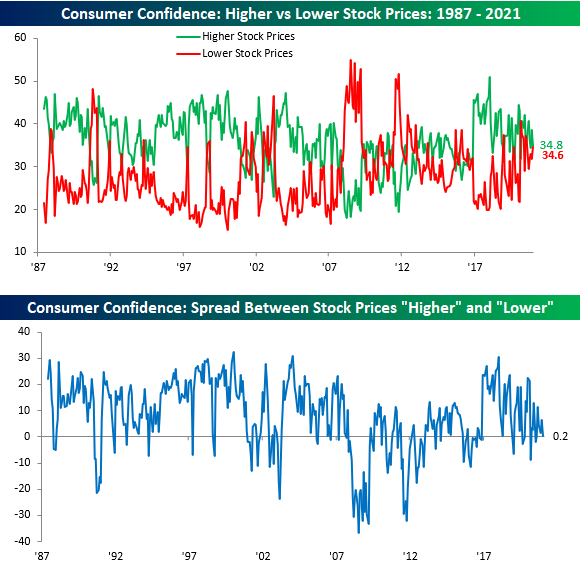 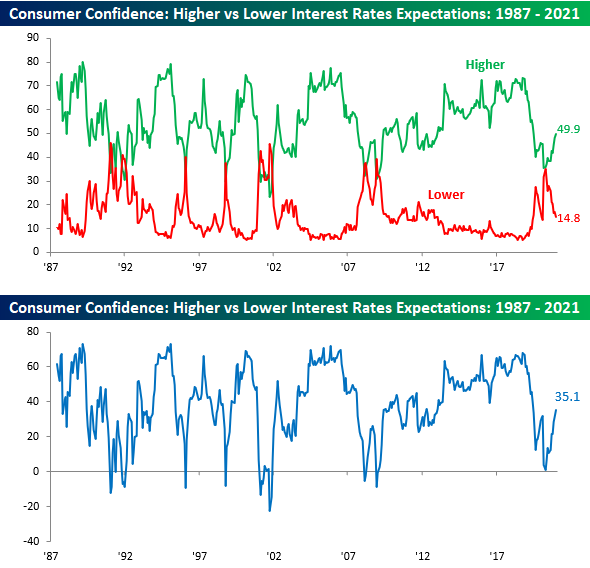