Consumer Confidence for the month of October was released earlier today and showed a slight dip relative to September.  The headline index dropped from 101.3 down to 100.9 compared to expectations for a reading of 102.0. Given the rising number of cases and the upcoming election, it’s not too surprising to see confidence come in a bit, so a decline of this magnitude isn’t all that concerning.  What is notable, though, is that even though Consumer Confidence remains right near post-COVID highs, it hasn’t bounced all that much off its lows.

Breaking out this month’s report by the sentiment of consumers towards both how they feel now and what they expect in the future, the Present Situation Index rose from 98.9 up to 104.6 while the Expectations component dropped from 102.9 down to 98.4.  The drop in the Expectations component of this month’s report looks like it’s a partial reflection of growing uncertainty regarding COVID and the election as we head into the colder months of November and December. 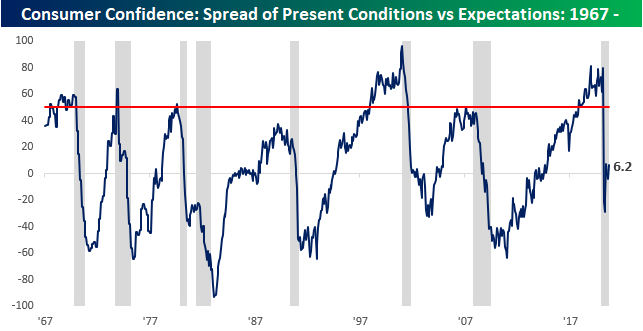 Sentiment towards jobs also suggests a relatively positive trend.  At the current level of 26.5, the Jobs Plentiful index is still far from its 40+ reading before COVID, but it did increase again in October as it has now done in four of the last five months.  While it’s by no means a strong reading at current levels, it hasn’t been getting worse either.  Looking at past recessions, it wasn’t until well after the recession ended that the Jobs Plentiful index started to rebound. Click here for instant access to all of our research and interactive tools.