Silver (SLV) Slides Back Below Its 50-DMA

The Silver Trust ETF (SLV) is currently sitting on a year-to-date gain of more than 35% even after falling 16.15% since its early August high. Yesterday’s session had a significant part to play in those recent declines as SLV had a rough start to the week with a decline of 7.6%.  As shown below, since SLV began trading in 2006, there have only been 21 days (0.58% of all trading days) in which SLV has fallen greater than 7% in a single day with yesterday marking the 19th worst day on record. In what has been a volatile year, that was the biggest decline since August 11th’s 13.6% drop; one day after its 52-week high. Prior to that, there was a 12.3% decline on March 16th, but before that, you would have to go back to 2013 to find another day with as large of a move. 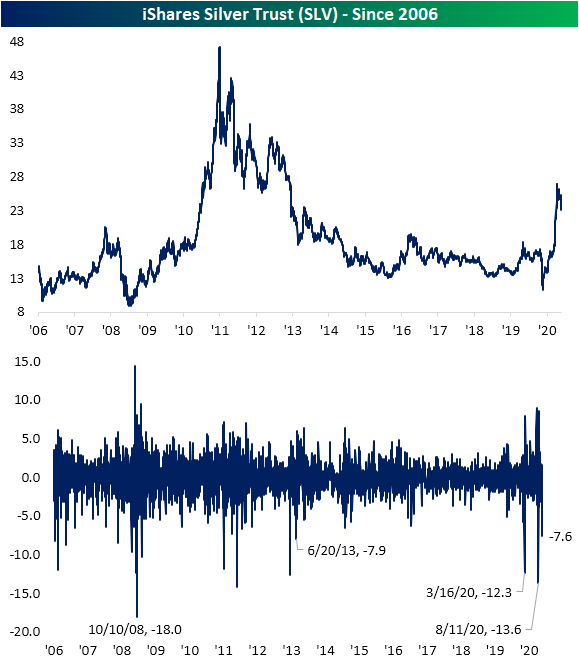 One other thing that yesterday’s drop marked was a fall back below SLV’s 50-DMA.  SLV has been trading above its 50-DMA every day since May 7th (94 consecutive trading days). That brings to an end the second-longest streak on record that SLV spent above its 50-DMA. The only longer such streak was one that lasted exactly 100 days that came to a close on January 13th, 2011. Back during that streak, SLV had risen 59% compared to the 79.1% rally from May through yesterday.  Click here to view Bespoke’s premium membership options for our best research available. 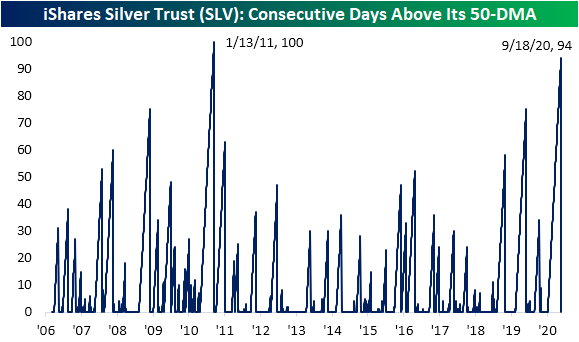