Silver (SLV) Rallies And More of the Same From Gold (GLD)

Precious metals have been a top-performing asset in 2020 on a year to date basis, but over the past few months, silver (SLV) and gold (GLD) have together remained in a downtrend. More recently, though, the two have begun to diverge.  While that downtrend is still in place for GLD (top chart), strong performance in recent days has resulted in SLV to break out of its own downtrend (second chart). Whereas the ETF sat below its 50-DMA about a week ago, in the five trading days through yesterday’s close, SLV rallied just over 10%. That leaves it extremely overbought at more than two standard deviations above its 50-day. GLD in the same span, on the other hand, has a much more modest 2.5%. 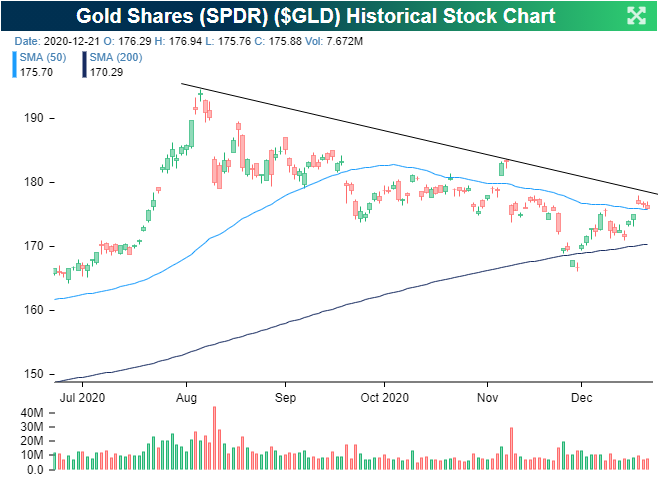 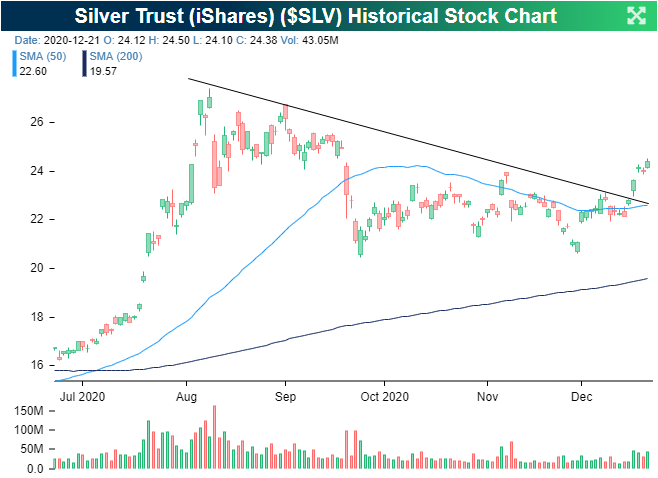 The breakout from its downtrend in silver has resulted in the ratio of the two to make a vertical move higher. As of yesterday’s close, the relative strength line of silver versus gold is back up to its highest levels since the first days of September. 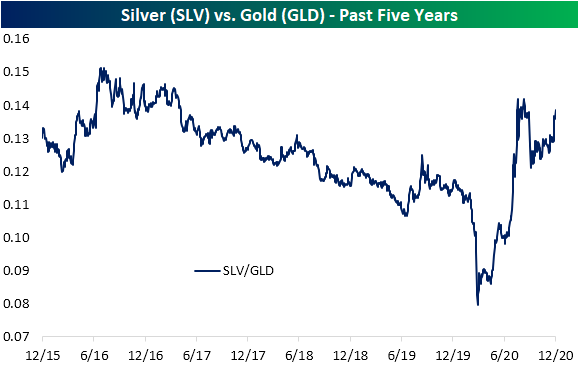 For the silver ETF (SLV), rallies of 10% or more in the span of just 5 trading days have been fairly rare.  Since it began trading back in 2006, there have only been 13 occurrences without another instance in the prior three months.  As shown in the table below, the last time such a move took place was in March of this year. Prior to that, the last instance was way back in July of 2016.

Even though those big short term moves may seem like SLV has momentum at its side, performance following such moves has been fairly weak.  As shown in the table below, at various periods over the following year, only six months out has averaged positive returns for SLV with that positive performance only occurring half the time.  Of the other periods, SLV has averaged declines with positive returns less than half the time.  Looking at these instances plotted on the chart of SLV, most of these moves within the past decade have come around the time of a short term peak. Before that, though, only the March 2008 occurrence saw this type of pattern as the other instances were typically followed by further moves higher.

With regards to silver’s yellow cousin, gold, performance after these same instances has been a bit stronger but generally remains weak over the following week, month, and three month periods.  Six months to one year out have usually been stronger, though, averaging positive returns.  Similar to SLV, the occurrences of the past decade have tended towards weakness while for those prior to that the opposite holds true. Click here to view Bespoke’s premium membership options for our best research available. 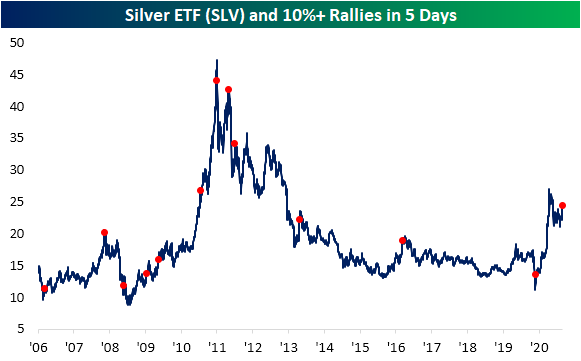