Silver Gets the Gold for YTD Performance

In last night’s Closer, we took a look at the massive rallies of late in the precious metals space. Gold (GLD) reached its highest level since 2011, but silver’s (SLV) performance on the day was even more of a sight to behold with gains in the top 1% of all days since SLV began trading in 2006.  Silver (SLV) rose 6.15% for its best day since March 24th when the metal rose 7.96%. Whereas the silver to gold ratio has been in a constant downtrend over the past decade (indicating underperformance of silver relative to gold), yesterday’s big gains led to a breakout of this downtrend.  With SLV trading higher by over 5% yet again this morning, that downtrend is being broken even more significantly, and that is even with SLV off the pre-market highs above $21. 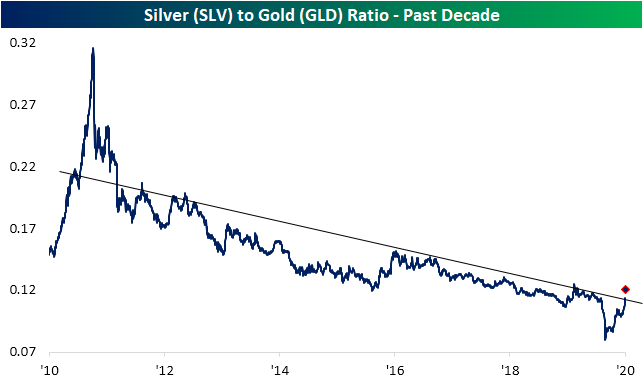 As recently as the final days of June, SLV was actually sitting on a loss year to date. That was a far cry from the performance of some of the best-performing assets of the year at the time like the Tech heavy Nasdaq 100 (QQQ) which was up over 14% and the long term Treasuries ETF (TLT) which was up over 21.5%.  Silver’s yellow cousin, gold, was likewise sitting on a sizeable gain of 16.6%.  Pivot ahead to today and the picture is very different.  Around this morning’s premarket highs when SLV was trading above $21, it actually topped QQQ, TLT, and GLD as the best performing asset in 2020. That is even with each of these other ETFs also trading higher. Click here to view Bespoke’s premium membership options for our best research available. 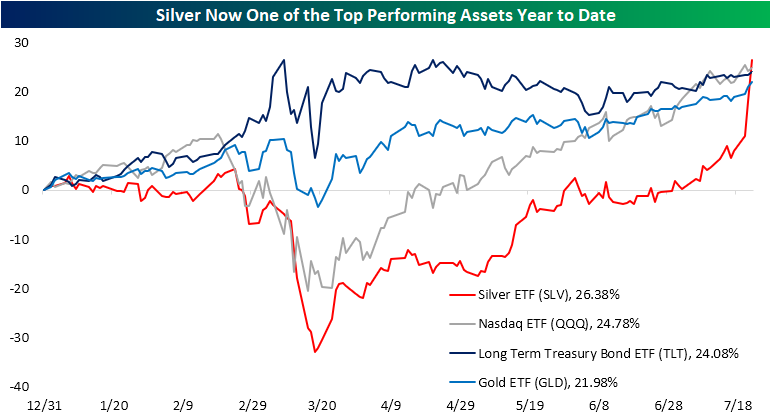