Silver Gets Back in the Backseat

Gold and silver are two precious metals typically used as investment vehicles for diversification and as a hedge against the dollar.  Because gold and, to a lesser extent, silver don’t have a lot of industrial utility, prices are often defined by the value the consumer is willing to pay.  In times when the dollar is weakening, investors have typically rushed to ‘safe havens’, a category that precious metals tend to fall in.

While it would be reasonable to expect gold and silver to trade similarly, that hasn’t necessarily been the case over the last decade.  Using the two ETFs that track the metals (gold- GLD and silver- SLV) as proxies, while they have been positively correlated, gold consistently outperformed silver from the beginning of 2013 right up through the start of 2020.  The lower chart shows the relative strength of GLD versus SLV over the last 10 years.  In it, a rising line indicates outperformance on the part of GLD while a falling line indicates SLV outperforming GLD.

With the outbreak of  COVID, gold’s relative strength versus silver went parabolic in March 2020 but quickly pulled back thereafter.  As optimism over economic growth surged in the months after the economic lockdowns, silver continued to outperform gold through the first quarter of this year.  However, as economic expectations have started to reset as the re-opening hasn’t been as smooth as originally hoped, silver has once again taken a back seat to gold.  Even as both have declined over the last few months, as shown in the top chart, the drop in silver has been larger than gold.  Given that it has at least some industrial utility, silver’s relative strength versus gold tends to be impacted more by sentiment regarding economic growth.  Read Bespoke’s most actionable market research by joining Bespoke Premium today!  Get started here. 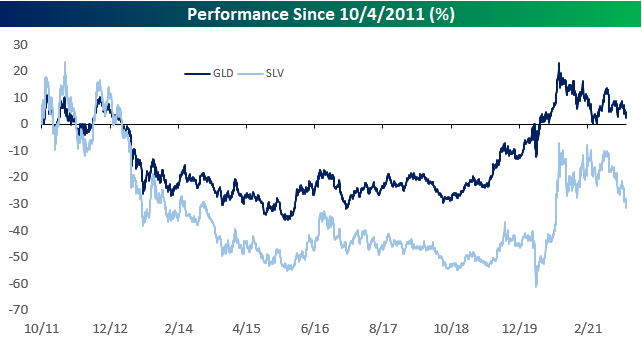 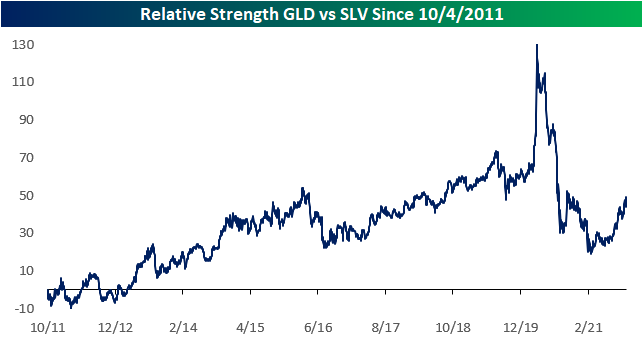