Sigh of Relief in ISM Services

After the Markit PMI reading for the Services sector came in weaker than expected, investors were on edge that the ISM Services report fifteen minutes later would also miss expectations.  Thankfully, the report didn’t disappoint as it rose from 52.6 (the lowest level since August 2016) up to 54.7 versus expectations for an increase to 53.5.  On a combined basis and accounting for each sector’s share of the overall economy, the October ISM increased from 52.1 (again, the lowest level since August 2016) up to 54.0. 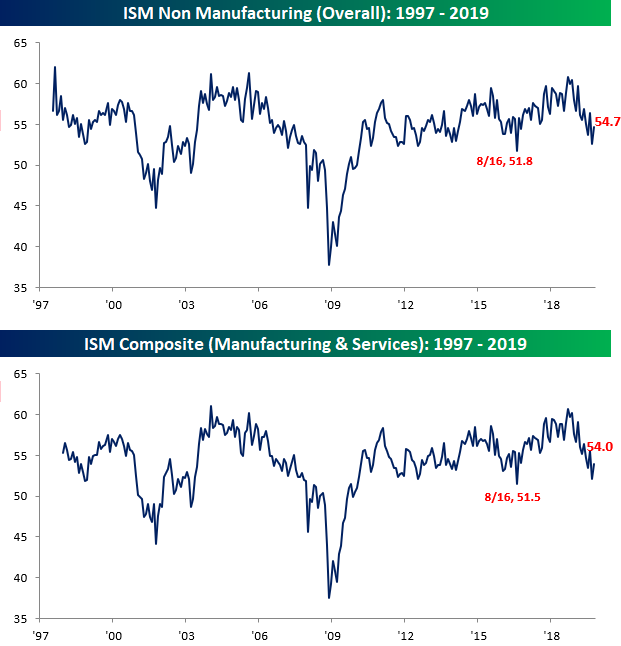 Looking at the internals of the report, breadth was biased to the downside as six components declined on a m/m basis and just four increased.  On a y/y basis, though, breadth was all in the same direction and that direction was down, as every component is lower now than it was at this same time last October.  While breadth was negative and the overall level of growth is on the weak side, only three components shown below did not show growth (50 or below) in October. 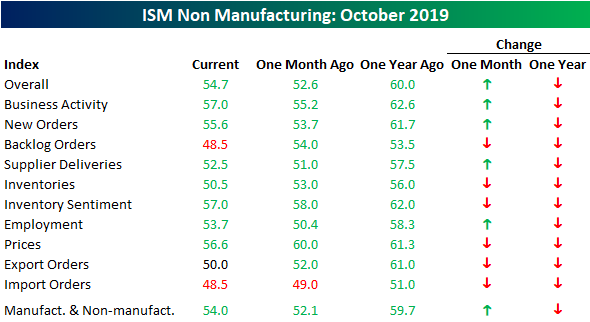 Two of the categories showing no growth in October were Export and Import Orders as the trade war continues to depress cross-border activity.  As shown in the charts below, the level of Export Orders is now at its lowest level since early 2017, while the level of Import Orders is at its joint lowest level since January 2016.  Sign up for Bespoke’s “2020” special and get our upcoming Bespoke Report 2020 Market Outlook and Investor Toolkit.