Although there have not been any major clusters outside of China, the spread of the coronavirus has investors understandably worried. Price action has been choppy in response as the story continues to develop, but investor sentiment is moving lower. The weekly reading on bearish sentiment from AAII fell from 45.6% down to 31.98% this week. That 13.62 percentage point decline is the largest one week drop in bullish sentiment since early August when it dropped 16.78 percentage points.  At that time bullish sentiment had fallen to an even lower 21.66%. 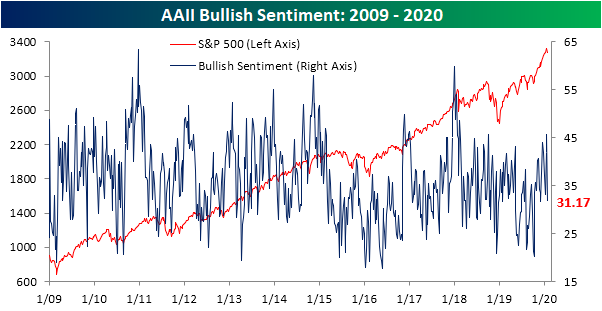 The loss in bullish sentiment was picked up by the bears as bearish sentiment rose 12.09 percentage points to 36.86%. As with bullish sentiment, this was the largest one-week buildup in negative sentiment since early August, although it was only about half the size of the 24.14 percentage point rise in the summer. Additionally, sentiment has not become extended in any major way either for bears or bulls which are both now in the middle of their ranges. 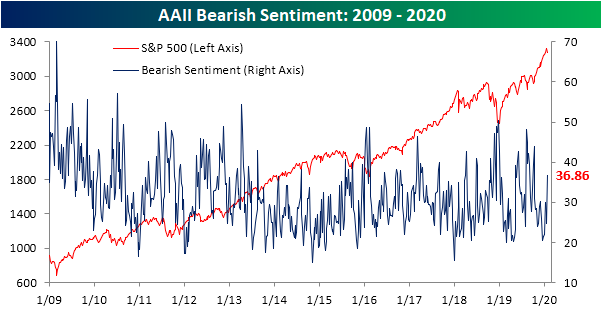 The shifts in bullish and bearish sentiment have also led the bull-bear spread to tick back into negative territory meaning a larger share of respondents to the AAII survey are reporting bearish sentiment. This snapped a 15 week-long streak with a positive bull-bear spread, and in the history of the survey dating back to 1987, there have only been 16 other streaks that have reached 15 weeks or more.  Only a handful, though, have occurred within the past decade. This most recent streak tied the one that came to a close in March of 2018 but was only half the size of the streak ending at 31 weeks in March of 2015. 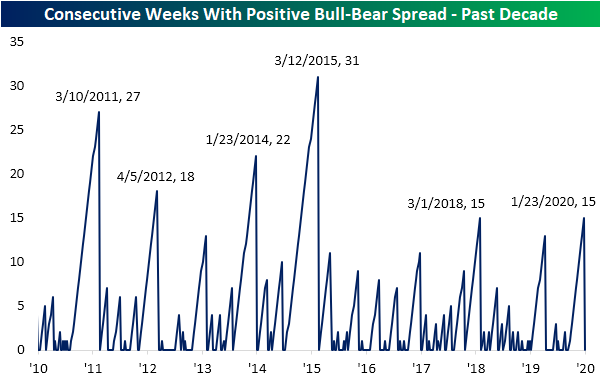 Last week, neutral sentiment fell below 30% for the first time since the first week of 2019 and the week before that it snapped a 22 week-long streak above its historical average.  Although it is still below its average, neutral sentiment picked up a bit this week rising back above 30% to 31.17%. Only slightly higher, it is still at the low end of the past year’s range.  Start a two-week free trial to Bespoke Institutional to access our interactive economic indicators monitor and much more. 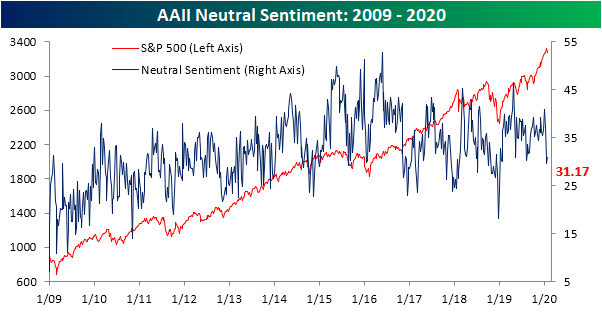