Whereas the focus of the investment world last week was on the most heavily shorted stocks, this week it has turned to the metals market as silver is having a tremendous day.  In today’s Morning Lineup, we highlighted a few reasons why the squeeze in SLV is an entirely different animal than what was seen last week. Taking a further look at this, positioning this time around for silver looks quite different than it did for stocks like GME. Whereas GameStop (GME) had more shares short than exist in the market, silver positioning is actually net long.  In the chart below, we show the speculator net positioning (as a percent of open interest) for silver as per Commitment of Traders data released on Friday which we also covered in Friday’s Closer. Net positioning (positive readings mean a net percentage of open interest is long and vice versa for negative readings) is in the 77th percentile of all weeks since 1986. That is also at the highest level since mid-February of last year.  Prior to that, the last time speculator positioning was as long was in late November of 2017. In other words, at least for futures contracts, a retail pump of silver would be targeting a metal that speculator sentiment is already pretty positive on. 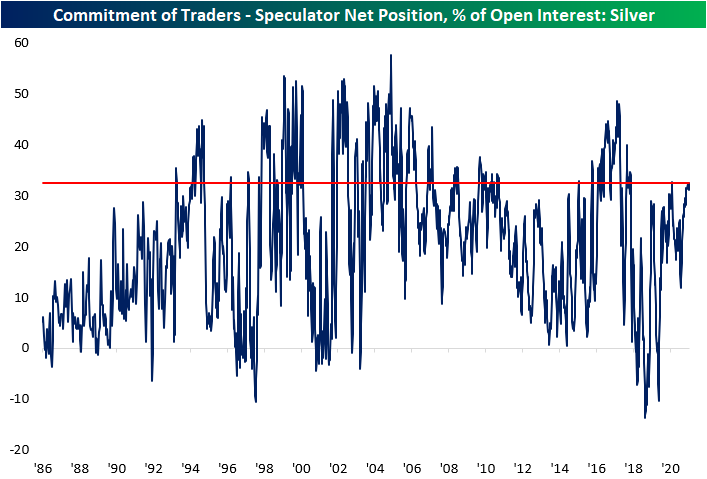 Additionally, in terms of the ETF tracking silver (SLV), short interest as a percentage of shares outstanding is by no means at any sort of extreme either.  While the most recent bi-weekly data did show a sharp uptick in the first half of January, short interest as a percent of share outstanding is not at an elevated level. Pulling that data forward to today, 3.72% of shares outstanding are short. That is in the 60th percentile of all readings since 2006 when the ETF began trading. It’s also well off the peak of 11.75% in June of 2011. So again, if SLV was to be a target for a short squeeze like GME, there is not nearly the same base of shorts as we saw in GameStop (GME) and other stocks last week. 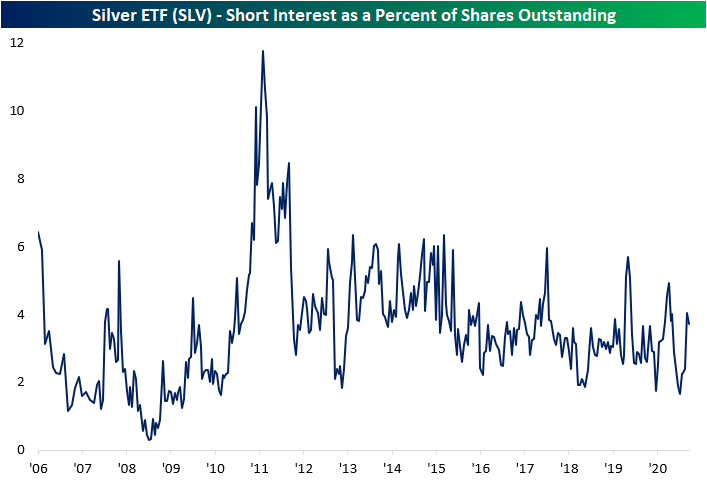 That also goes for individual mining stocks.  In the table below, we show the Russell 3000 stocks that are part of the GICS Level 3 Mining and Metals industry.  As shown, precious metal related names, especially those of the silver sub-industry, are flying higher today with Hecla Mining (HL) and Gatos Silver (GATO) both up over 20% as of this writing. Another silver mining giant, Coeur (CDE), is also up double digits today.  Despite this, these do not have particularly high levels of short interest. In fact, steel makers like United States Steel (X), Cleveland Cliffs (CLF), and Allegheny Technologies (ATI) all boast far higher short interest as a percent of float. In other words, while silver and related stocks may be the target of retail investors this week, the “short squeeze” possibility is not the same as what was observed last week. Click here to view Bespoke’s premium membership options for our best research available. 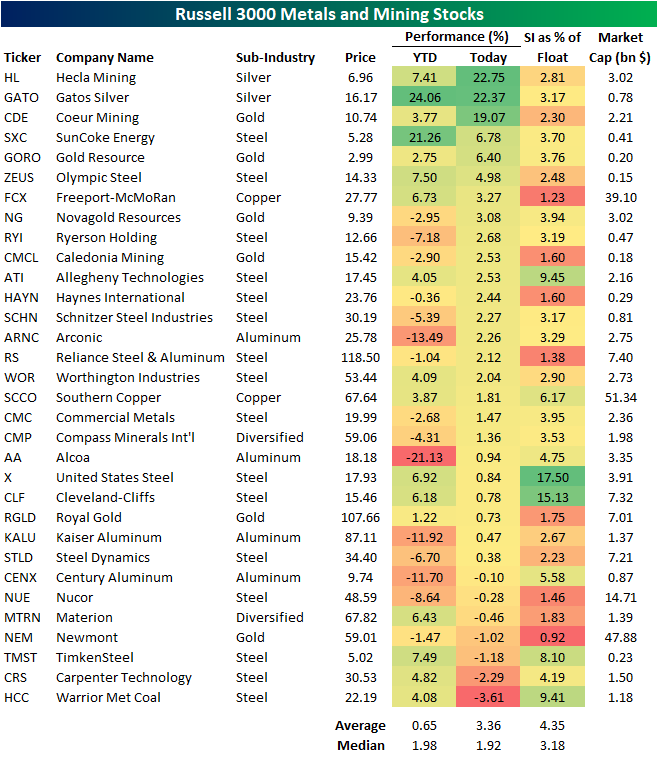