SHOP for a Tesla (TSLA)

Tesla (TSLA) has gobbled up a ton of news coverage over the last few months as its stock price has soared.  Less than a year ago the stock was languishing at the same level it was trading at in early 2014, but since it started its lift-off in early June 2019, shares are up 334%.

Below is a chart showing Tesla’s (TSLA) percentage change since it IPOd at $17/share back in June 2010.  Investors who managed to get in at the IPO price (and have stayed in) are now sitting on a return of 4,474%.  Start a two-week free trial to Bespoke Institutional to access our full range of research reports and interactive tools. 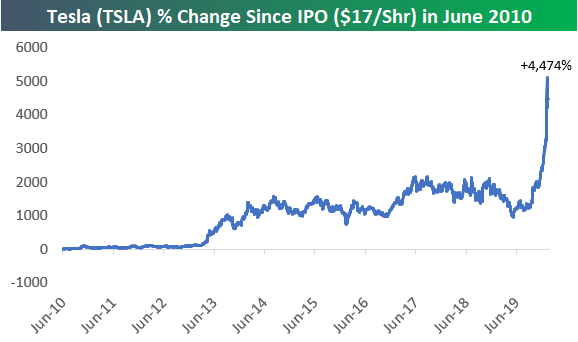 While it hasn’t gotten nearly the same amount of coverage as Tesla (TSLA), a company that’s headquartered in Canada is really giving Tesla a run for its money.  As shown below, e-commerce company Shopify (SHOP) — which IPOd at the same $17 share price as TSLA in May 2015 — has returned 3,159% since it went public less than five years ago. 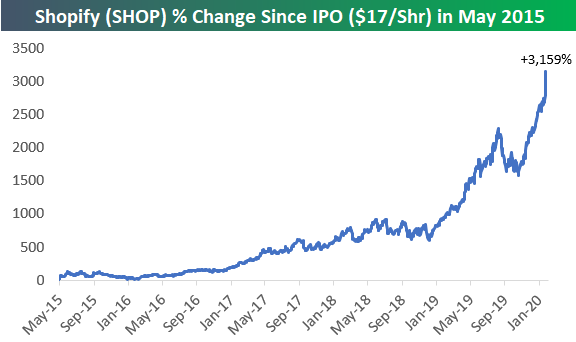 Below we show the percentage change for both Tesla (TSLA) and Shopify (SHOP) from their IPO price.  While Tesla is currently in the lead by more than 1,000%, SHOP has done more in a shorter amount of time. 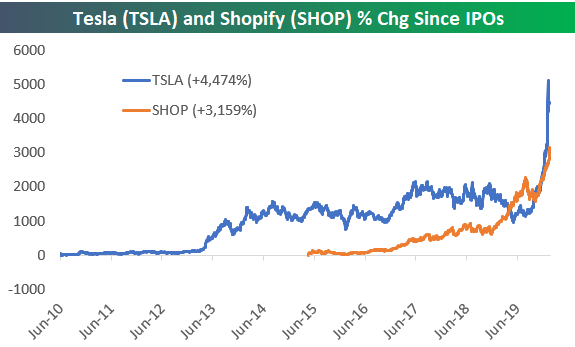 If we show where Tesla (TSLA) was trading at this point in SHOP’s lifespan as a public company, SHOP is the clear winner: 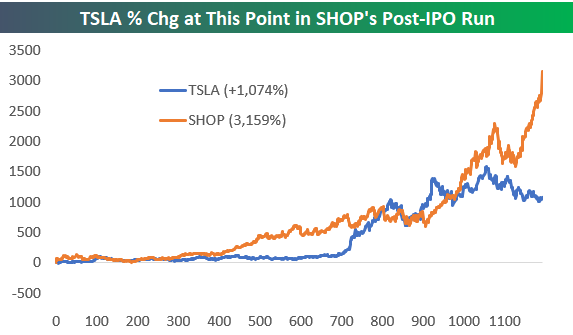 Even if we look at more recent returns, SHOP has quietly managed to keep up with TSLA.  Since the start of 2019, SHOP is actually up 300% versus TSLA’s gain of 134%. 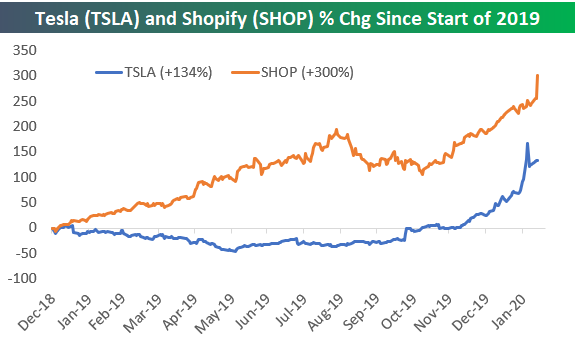 It’s only over the very near term that TSLA has been stronger.  Even still, over the last three months, SHOP has put up a gain of 81% versus TSLA’s 122% gain. 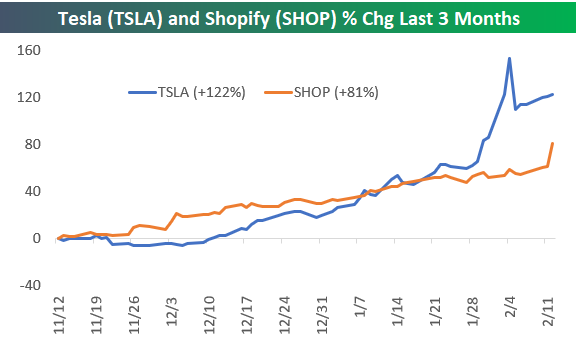 As mentioned above, Tesla (TSLA) is up 4,472% since it IPOd on June 28th, 2010.  We wanted to see which, if any, stocks had put up similar performance numbers over the same time frame.

Below is a look at the best-performing stocks in the Russell 3,000 since TSLA’s IPO.  There are actually four stocks that have done better, with Paysign (PAYS) on top by a mile.  Back in June 2010, PAYS was trading at $0.05/share, so its current price of $9.15 gives it a gain of more than 18,000% over this time frame.  Patrick Industries (PATK), MMC Capital (MMAC), and LendingTree (TREE) are the three other stocks that have outperformed TSLA since its IPO date.

Some of the biggest companies to put up huge returns since TSLA’s IPO include NVIDIA (NVDA) with a gain of 2,338%, Netflix (NFLX) with a gain of 2,151%, and Amazon (AMZN) with a gain of 1,734%.  Since it went public after TSLA, SHOP is not on the list, but with a market cap of over $60 billion, it’s hardly a small company.  Other notable winners include names like ACADIA Pharma (ACAD), Domino’s Pizza (DPZ), MarketAxess (MKTX), Lithia Motors (LAD), Cheniere Energy (LNG), and Align Tech (ALGN).  At Bespoke we offer a full suite of easy-to-use investor tools to go along with our market research. CLICK HERE to read more about these useful tools now. 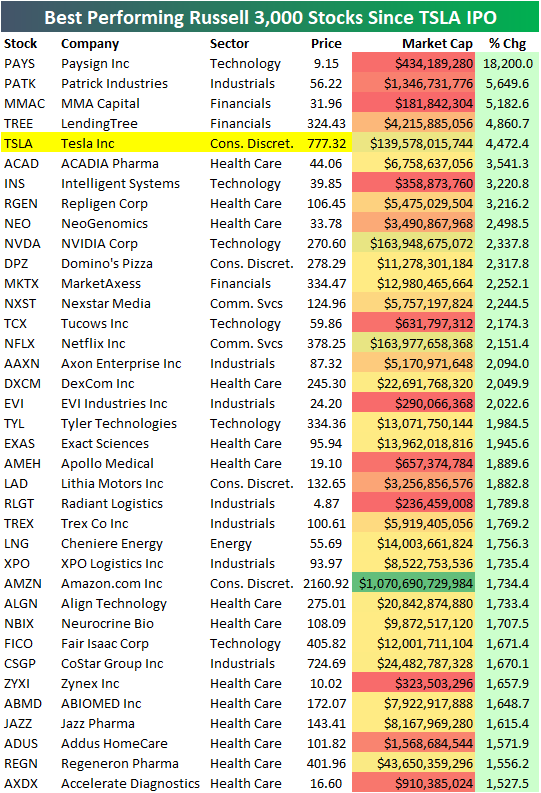