Following Monday’s release of the ISM’s Manufacturing report for July, this morning the service counterpart was released. The report showed activity in the service sector continued to pick up with the headline number rising to 58.1 from 57.1 last month and expectations for a reading of 55.0.  This month’s reading was the highest since February 2019 (58.5) and represented the first back to back expansionary readings (above 50) since February and March.  That is also the highest level of the index since February of 2019 when it was at 58.5.

Much of the same applies to the combined reading of the service and manufacturing indices.  With both the service and manufacturing readings rising in July, the composite of the two has now risen to 57.7; a second straight month of expansionary readings.  That is also the strongest level of the composite since a reading of 58 in February 2019. For both the service and composite indices, the massive reversals higher since each ones’ respective low in April has also marked the biggest 3-month upticks on record. In other words, the broad economy is no longer contracting and continued to improve month over month in both June and July. 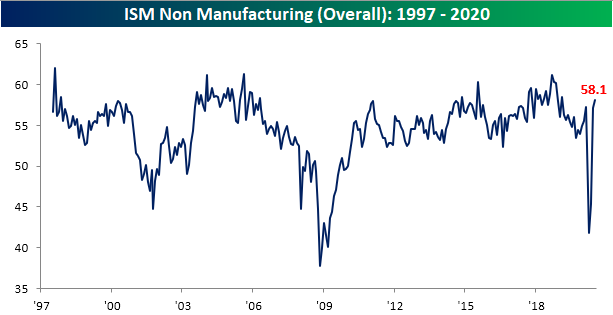 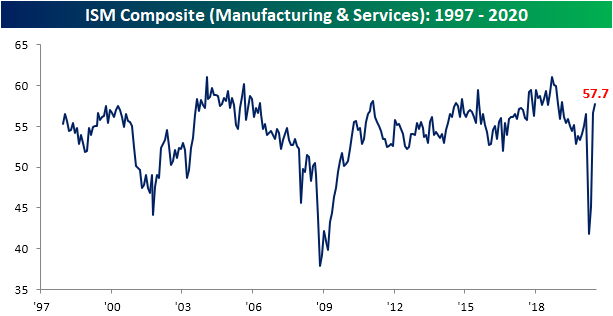 While the headline number was improved and most of the individual categories showed expansionary readings in July, not every index rose.  There were only three sub-indices to swing higher in July: Business Activity, New Orders, and Backlog Orders.  Every other one was lower with the indices for Employment and Export and Import orders even showing contractionary readings. Granted, with some nuance, not all of those declines are necessarily negatives for the economy. For example, the lower reading in Supplier Deliveries indicates that supply chains are normalizing as lead times become shorter. Additionally, the big drop in inventories indicates moderation in the massive inventory builds of the past few months. 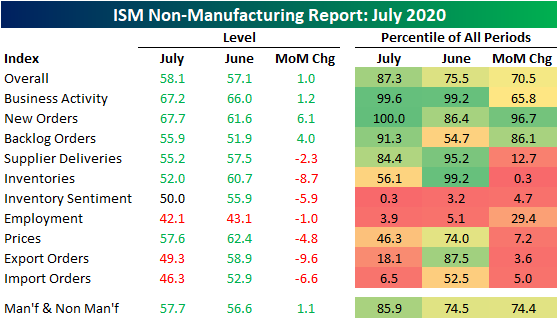 While some areas of the survey fell MoM with a few even dipping into contractionary territory, the index for Business Activity was far from one of them.  The index rose to 67.2 which is the highest reading on record outside of January of 2004 when it was just 0.5 points higher.

Part of that renewed outlook for business activity is thanks surging demand.  In fact, the New Orders index surged 6.1 points (the ninth largest MoM increase on record) in July to a record high of 67.7.  That means service sector businesses in July reported a record improvement in demand from the prior month.  With an increase in New Orders, orders that were already in place are beginning to stack up.  The index for Order Backlogs rose 4 points to 55.9.  That is the highest reading since March of last year.

Whereas the past few months saw huge inventory builds as a result of plummeting demand, improved demand has led to a reversal of this in July. The index for inventories fell 8.7 points in July to 52.  That was the second-largest MoM decline on record behind a 12.4 point drop back in March.

As previously mentioned, the decline in some areas of the survey like Inventories and Supplier Deliveries could actually be viewed as a positive.  One area that does not apply is the index for employment which remains the weakest category of the service sector.  After a substantial rebound last month (the biggest MoM increase on record), the Employment index reversed lower falling to 42.1 in July.  While that is a small move relative to the past few months, it indicates further contractions in employment. July marked a fifth straight month in which Employment was in contraction.  That’s the longest such streak since one that lasted from May of 2008 to June of 2010. Similar to the manufacturing index, while it could mean a reversal in the month ahead, at the moment that weak reading for the labor market stands in stark contrast with the improved demand picture.

As for the commentary section, it provided a bit more insight into employment as well as other areas.  One comment noted the trend of remote work stating that roughly 95% of the company’s workforce is working remotely while another noted virtual meetings and the likes remain the norm.  Another made mention that they were beginning to bring employees back to the workplace.  With regards to demand, one company in the Utilities industry reported conditions appear to be at levels from before COVID-19.  Meanwhile, one comment from the Construction industry reported strength in homebuilding which not only backs up recent macroeconomic data but should also bode well for that industry’s stocks. Click here to view Bespoke’s premium membership options for our best research available. 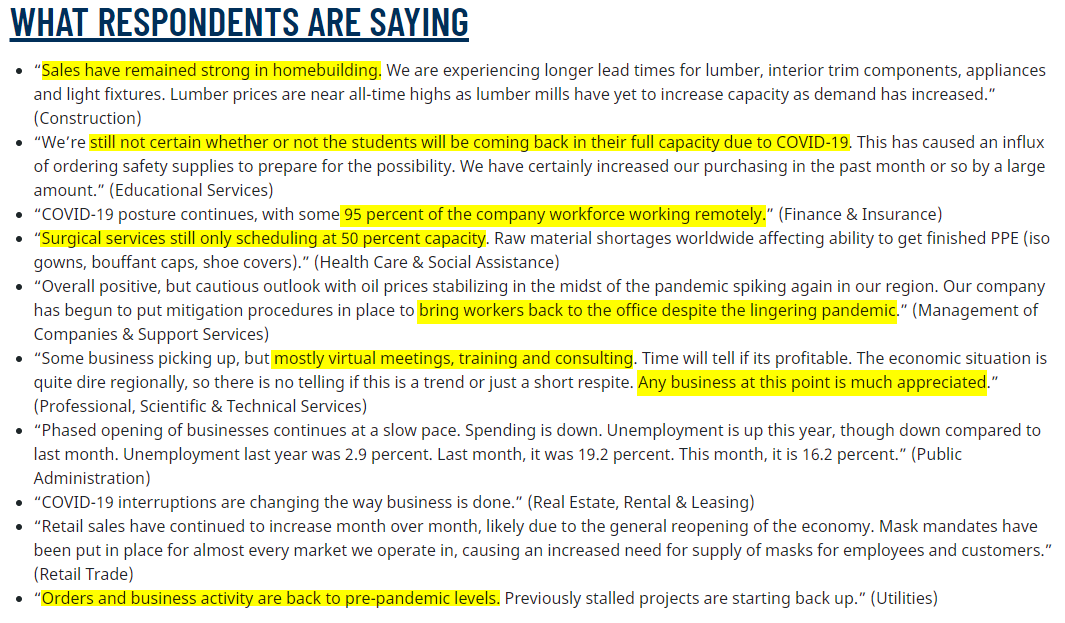