Like many other data points of late, the ISM’s reading on the service sector saw a massive rebound in the month of June with the headline index rising to 57.1; well above estimates of a reading of 50.2. Coming in 6.9 points higher than forecasts, the only larger beat relative to expectations of all months since at least 2008 was back in March of this year when the headline index exceeded forecasts by 9.5 points. That returns the index to just about where it stood in February of this year (57.3).  That was also the first expansionary reading (those above 50) since March. 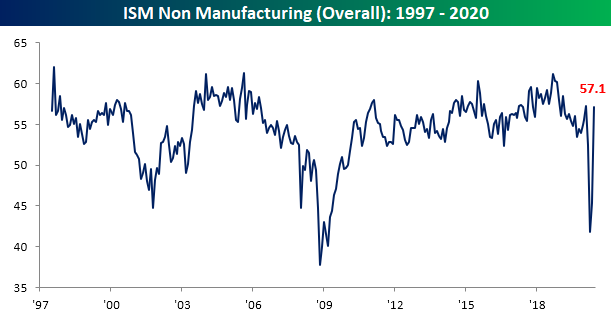 With today’s service sector release in combination with last Wednesday’s strong reading of the manufacturing counterpart, the ISM Composite reading is likewise right around the same levels as February. In fact, it is actually slightly higher at 56.6 in June compared to 56.5 in February earlier this year. That means June’s reading of 56.6 is the highest reading in the composite since February of 2019. 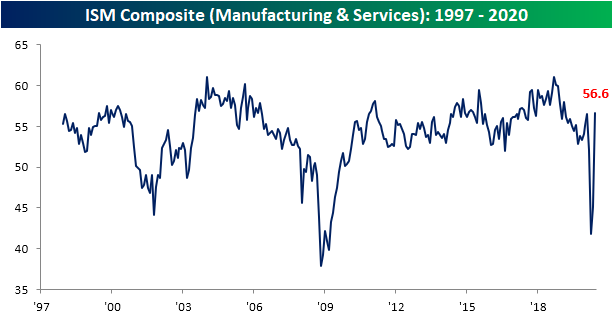 As shown in the table below, this month was a strong report across the board (albeit from low levels of activity); arguably even more so than last week’s Manufacturing report.  Currently, almost every category is now showing an expansionary reading compared to only three doing so in May, one of which, Supplier Deliveries, was not necessarily a positive as it indicated supply chain issues. Looking at the June report, the only area of weakness in the sense that it is still showing a contractionary reading is that of employment. But even that index improved sharply month over month as was the case more broadly across each of the other categories. While employment remains on the weak side, the indices for Business Activity and Inventories are around some of their highest readings on record.

Not only is nearly every index now showing a healthier expansionary reading, but the monthly increases were massive.  For the overall headline index as well as the manufacturing and services composite in addition to the indices for Business Activity, New Orders, Inventories, Employment, and Export Orders, June’s increases were the largest on record for each respective index.  The only one without a notable move in the top (or bottom in the case of Supplier Deliveries) 5% of all month over month changes was for Inventory Sentiment. 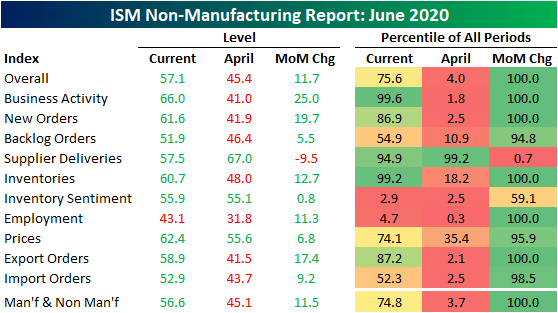 The commentary section of the report backed up the data with respondents giving an overall tone of improved conditions with risks still very much in play. Those risks are not just in regards to COVID-19, though, as the election and political unrest were also quoted as material concerns among businesses. 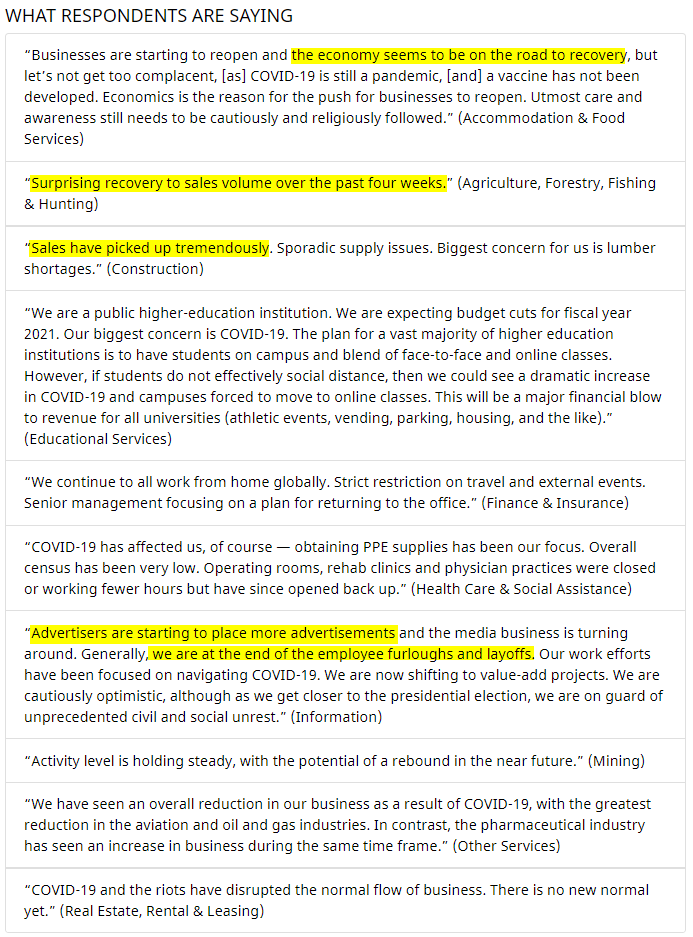 The index for Business Activity was perhaps one of the strongest areas of this month’s report. Coming in at 66 in June, it rose 25 points from May.  That not only broke the record for the largest monthly gain of 15 points from just last month but also brings this index to its second-highest level for any month in the history of the report. The only higher reading came in January of 2004.

It is a similar story for the index for inventories which surged by 12.7 points to 60.7 in June.  That was also the biggest increase on record surpassing a 9 point jump in March of 2007.  This month’s reading of 60.7 is also now the third-highest reading on record behind May of 2007 and 2010’s readings of 61 and 62.5, respectively. That indicates businesses massively increased their inventories in June.

There are two likely reasons for businesses raising inventory levels.  For starters, and as was noted in the commentary section, sales and overall demand have come back in a big way.  New Orders rose by the most of any month on record with the index reaching 61.6.  That is the highest level since February and in the upper end of the past few years’ range. Additionally, businesses can actually obtain inventories as disruptions in the supply chain seem to have been worked off.  After surging to a record high 78.3 in April, the index for Supplier Deliveries fell for two consecutive months down to 57.5 in June.  While that is still very elevated versus history (in the 94th percentile of all readings), it is a much healthier level than recent months with about half of companies reporting slower deliveries and the other half reporting faster deliveries.  One comment in the report noted that “Delivery delays appear to have largely shaken out, and most products are becoming readily available with normal lead/shipping times”.

As mentioned above, the key area of weakness in the survey remains Employment.  This index showed a fourth consecutive month of contractionary readings at 43.1 in June despite a record-sized increase of 11.3 points.  In other words, even though other key areas of business are returning to normal, a higher share of businesses are still reporting lower levels of employment than higher. While still weak, even Employment is getting less worse.  Roughly a quarter of responding businesses reported lower levels of employment compared to over 40% in April and May.  Meanwhile, 16.1% reported an increase in June compared to 5.8% and 6.9% in April and May, respectively.

Finally, looking at the commodities section of the report, protective equipment and cleaning supplies remain in very high demand consistent with the manufacturing report while fuel products and steel have seen prices lower. Click here to view Bespoke’s premium membership options for our best research available. 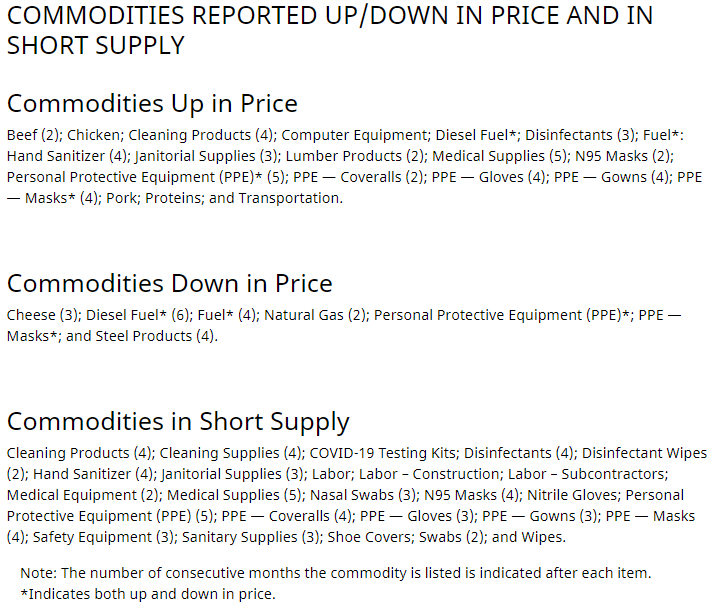