Despite beating expectations of 44.4, the ISM Services report for May showed another month of contractionary activity. Although still at contractionary levels, May was not as weak as April as the headline index rose 3.6 points to 45.4.  Along with January of 2018, that 3.6 point MoM increase was the largest one month increase in the index since September of 2017. So like the manufacturing report on Monday, this month’s report for the non-manufacturing sector showed activity is still declining. 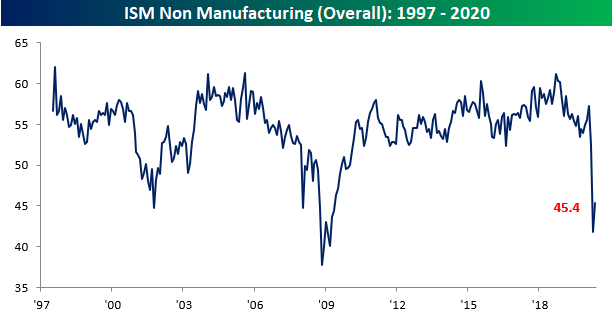 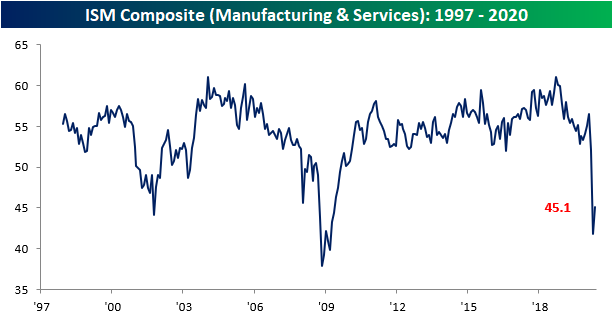 Like the headline number, most of the sub-indices also remain in contraction territory and around some of the weakest levels on record despite massive improvements from the prior month. Six of the ten sub-indices are still in the bottom 5% of all readings (since 1997) even after some of the largest one month increases on record. 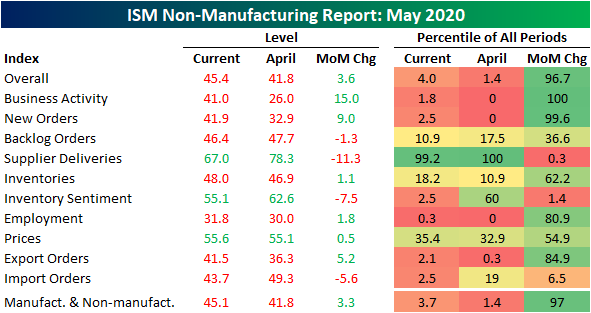 The indices for Business Activity and New Orders are two categories that declined to record lows in April, but in May both experienced massive rebounds. For Business Activity, it’s 15-point m/m increase was the largest on record, and yet it still remains at a contractionary level of 41.  For New Orders, the 9 point increase to 41.9 was the second largest one month gain on record behind April of 2009 (+9.6). Here again, though it remains in the bottom 2.5% of all readings.

As we noted in Monday’s manufacturing report, the pandemic has seemed to massively disrupt supply chains. Even after experiencing the second largest drop ever (11.3 points to 67), Supplier Deliveries remain at their third highest level for any month in the history of the data.  That indicates further slowing lead times.  The respondent commentary offered some interesting insight’s into why supplier deliveries have slowed. One commented that “Production shutdowns have greatly increased lead times” while another noted that “if the product is coming out of China, the delays are even longer.”

In addition to the supply shock being observed, another area worth mentioning in this month’s report was that of commodities in short supply. With measures to thwart the spread of the virus still in place and supply chains still disrupted, cleaning supplies and protective equipment still dominate the commodities that are reported to be in short supply. As such, they also continue to rise in price. 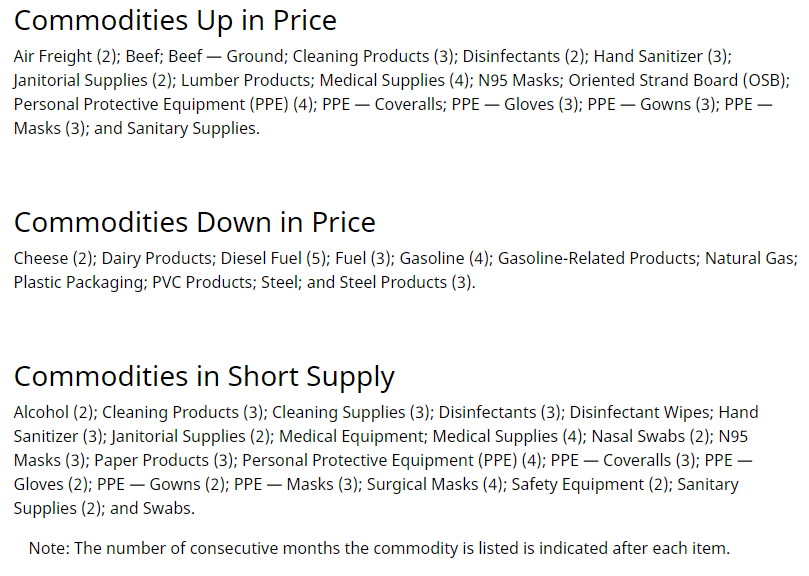 One of the areas that perhaps remains the weakest in ISM’s survey has been that of Employment. There was not a single industry that reported an increase in employment in May, and the index for that sector only rose 1.8 points to 31.8.  Even with that uptick, it is below the lows from 2009. Start a two-week free trial to Bespoke Institutional to access our interactive economic indicators monitor and much more.