Service Sector Improves But Not Without Problems

Tuesday’s release of the ISM’s reading on the manufacturing sector showed a significant acceleration in activity in the month of December.  The service sector counterpart released today similarly showed activity grew at a more rapid pace in December, though, the improvement was not as dramatic as in the manufacturing sector.  The headline index rose to a three-month high of 57.2 from 55.9 in November.  On a combined basis and accounting for each sector’s share in the overall economy, the composite ISM for December rose 1.5 points to 57.6- the highest reading since July. 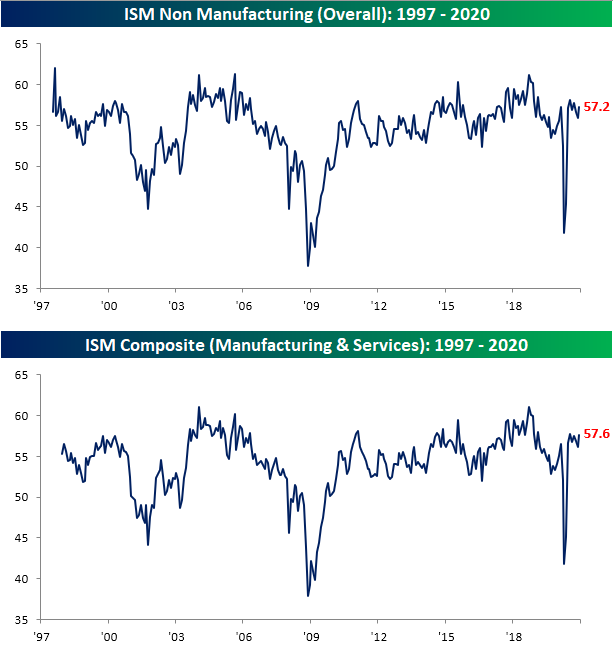 Although the headline index was higher, breadth in the Non-Manufacturing report was mixed.  Half of the indices for the various categories were lower month over month with two of them, Backlog Orders and Employment, falling into contraction.  Overall, the report showed service sector demand continued to grow in December, but lead times were longer and employment cut back for the first time since August. 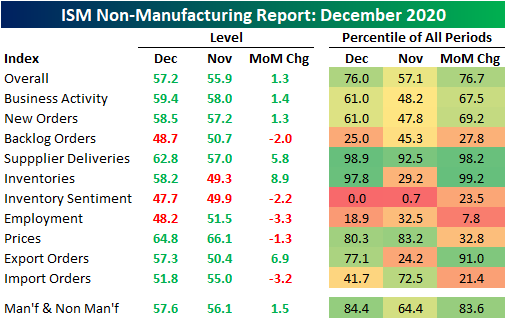 The commentary section also painted a more mixed picture than the uptick in the headline number.  A number of comments noted that recently implemented shutdowns and surges in COVID cases have had negative impacts on businesses ranging from weaker demand to labor shortages to supply and logistics issues. 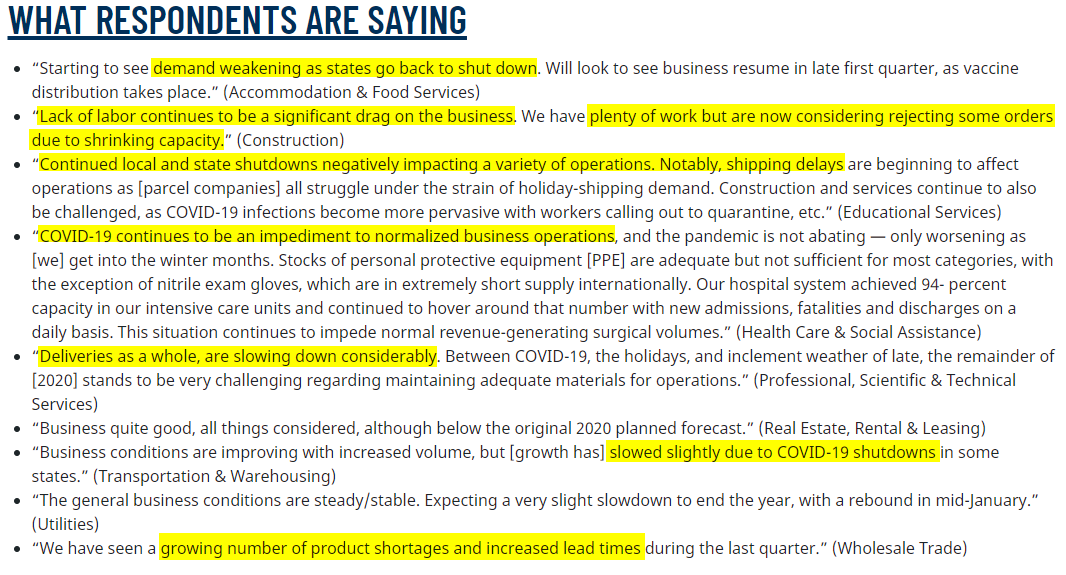 Although many comments noted how COVID has recently impacted demand, December was all around a pretty good month.  New Orders remain well off the highs from the late spring through the fall and are also below levels from prior to COVID, but December’s reading of 58.5 was nonetheless consistent with growth in order volumes.  That marked a seventh consecutive month of growth (above 50) in New Orders and an acceleration versus November.  Meanwhile, businesses have made progress in working off their backlog of orders.  That index fell into contraction for the first time in six months, falling two points to 48.7.  That is the lowest level in the Backlog Orders index since May 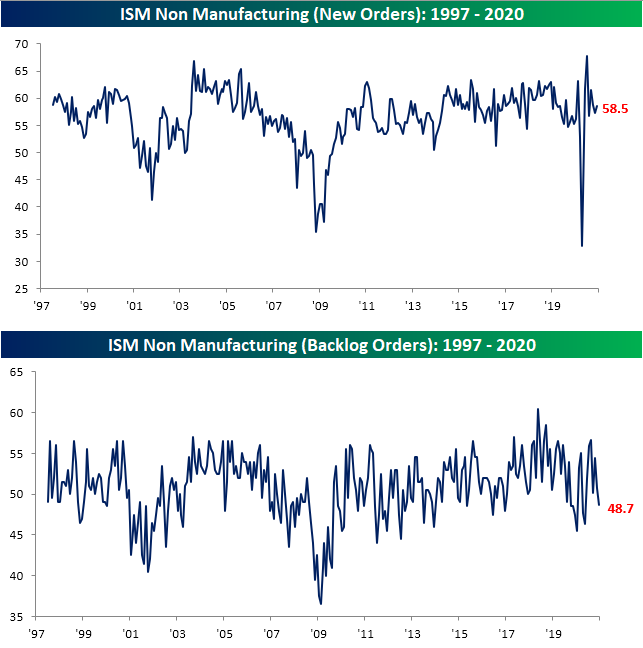 Given the further growth in demand, for only the third month in the history of the report—the other months being November and March of 2020—businesses reported inventory levels as being too low (readings below 50). In fact, at 47.7, the Inventory Sentiment index broke below the March reading of 47.8 for a new record low. Although businesses think inventories are too low, actual inventory levels rose at a historically high pace in December.  After a contractionary reading in November, the Inventory index rose 8.9 points to 58.2 in December.  That is the seventh-highest reading on record and the month over month increase stands in the top 1% of all monthly moves. While those two readings may seem counterintuitive, some comments highlighted by ISM give some color into inventories.  A comment from one business noted that the business was “Building inventory when and where possible to mitigate supply chain risks like supplier plant disruptions, carrier-related delays, and the holidays” while another noted that “Inventories were previously too low.” In other words, rather than weakened demand, the build up of inventories was likely in order to get in front of foreseen supply issues down the road and to make up for previously weak inventory levels. 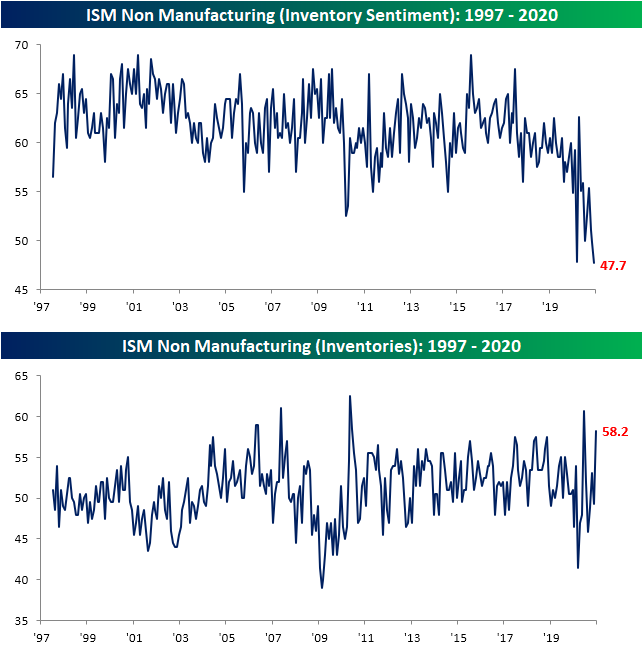 There is evidence of supply issues after all. As previously noted, comments from surveyed businesses made frequent mentions of issues with supply chains and lead times. The index for Supplier Deliveries backs this up.  Higher readings in this index indicate longer lead times, and in December, the index jumped 5.8 points to the highest level since May.  That increase was the sixth-largest MoM jump on record, and in terms of the level of the index, it was the fourth-highest reading on record. Click here to view Bespoke’s premium membership options for our best research available. 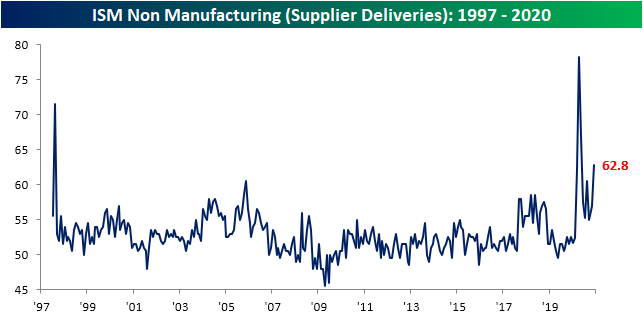