In an earlier post, we highlighted the continued strength of MBA’s weekly reading on mortgage purchases. But another indicator released earlier this week, Black Knight’s Mortgage Monitor, is painting a weaker picture of the US housing market as 4.3 million of all loans are late or in foreclosure.  In their release of May data on Monday, the company reported 7.76% of all mortgage loans are now delinquent.  That is up from 6.45% in April and the second-largest monthly increase on record behind the 3.1 percentage point increase from March to April of this year. The delinquency rate is now at its highest level since December of 2011. 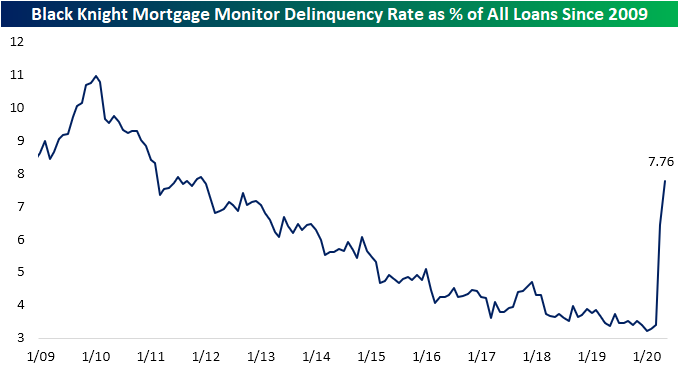 Of the 4.3 million loans that are delinquent, 200K have moved into foreclosure.  As shown below, that leaves both the foreclosure rate and the number of new foreclosures at record lows. While that would normally be a sign of strength, as we have highlighted in the past, foreclosures are low because there has been a moratorium on them.  That trend is likely to continue at least for the next couple of months as the FHFA recently extended foreclosure and eviction moratoriums through the end of August from the end of June. 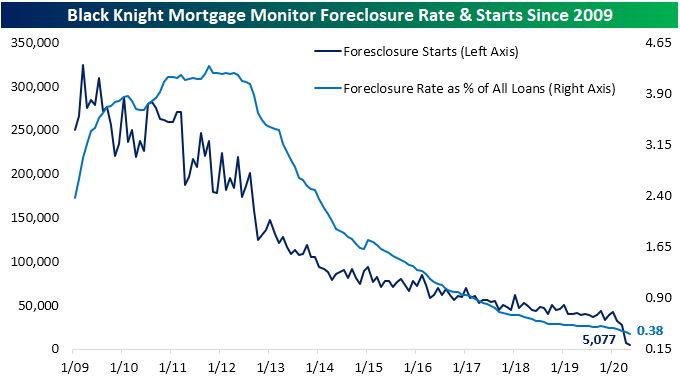 Overall, while the number of non-current loans is up, newly delinquent loans as a percentage of total delinquencies declined due to the fact that many borrowers who had previously failed to make payments continued to be delinquent on their loans.  Additionally, although there was not a major uptick in new delinquencies in May, that could change in the next few months as forbearances come to an end.  In the report, Black Knight noted the schedule for forbearances, and holding constant any extensions, nearly half of all forbearances were set to expire in June with another quarter ending in July. Click here to view Bespoke’s premium membership options for our best research available. 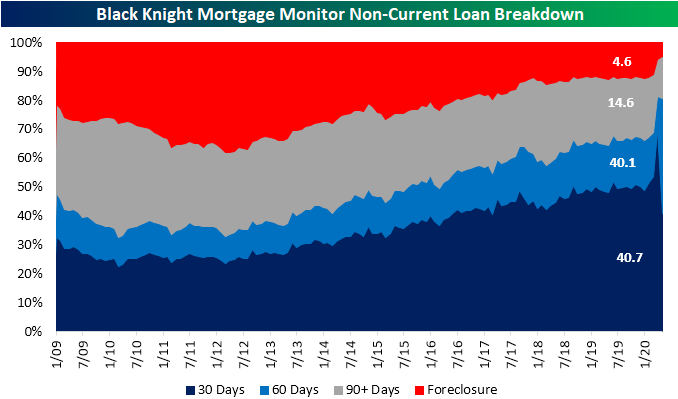