September 2nd of last year marked a notable turning point for the US equity market. The S&P 500 put in a short-term peak on that date and it also marked the beginning of what we dubbed “The Big Shift”. That shift was marked by the outperformance of value over growth and solid breadth with the equal-weight S&P 500 outperforming the market-cap weighted index. Fast forward one year, and yet again the close on September 2nd has marked the recent high for the S&P 500 as shown below.  In addition to the highs coming on the same day, some of the intra-month patterns are also similar including a small rally in the middle of the month. With that said, the declines last year were more severe, especially at the start of the month, and this year has not seen a consistent rally into month’s end as was the case in 2020. 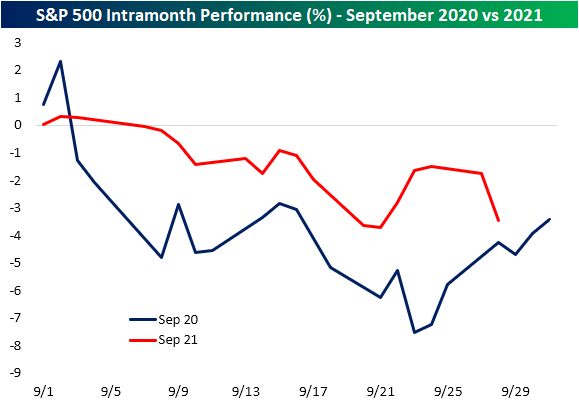 As previously mentioned, one of the most notable changes of the Big Shift last September 2nd was a reversal of a long-term trend of growth’s outperformance. Growth’s outperformance versus value peaked on September 2nd last year, and it also peaked in early September this year as well.  Below is a chart showing the relative strength of growth versus value since the COVID Crash low for the broad market last March 23rd.  A rising line means growth is outperforming, while a falling line means value is outperforming.  The months of September 2020 and September 2021 (through 9/28) are highlighted in red.  As you can see, growth peaked versus value at the beginning of September of both 2020 and 2021 after a period of sharp outperformance in the months prior.  September 2020 was only the start of value’s outperformance, which continued up until this spring when growth began to outperform again.  It remains to be seen if the same “value” trade will now continue in the months ahead like it did last year, but it’s certainly interesting how similar the growth/value trade has been this September versus last September.  Click here to view Bespoke’s premium membership options. 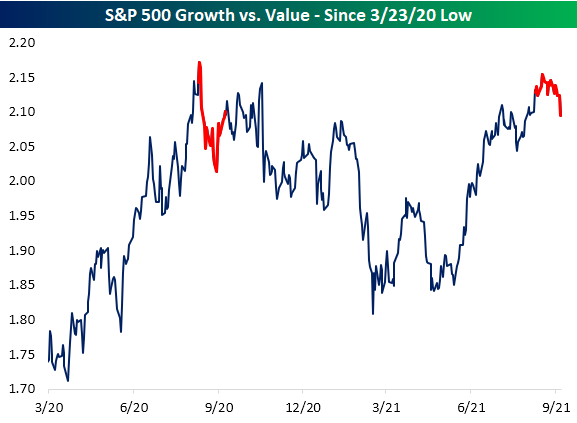