Hard to believe that only two weeks ago, AAII’s reading on market optimism fell to its lowest reading since May of 2016. Since that bottom, bullish sentiment has rebounded to 35.6%. While still below the historical average of 38.08%, the percentage of bullish investors is now at its highest level since the first week of August when it was 38.4%. 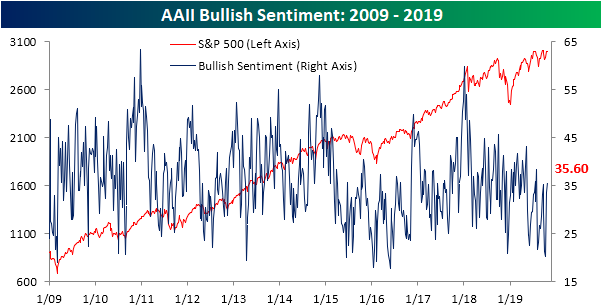 Likewise, market pessimism has fallen considerably since its recent peak of 43.96% from October 10th.  Now at 28.27%, the percentage reporting as bearish is at its lowest since September 19th. Bearish sentiment is also back below its historical average for the first time since that same week. 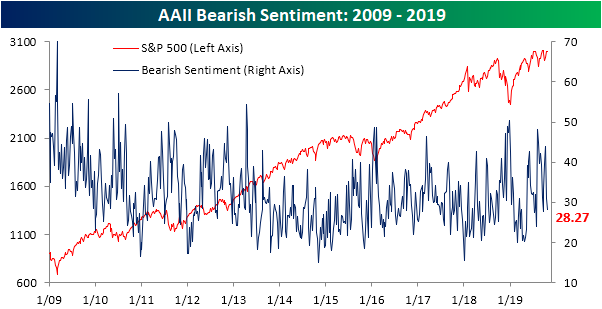 As shown in the charts below, it is not a common occurrence for either bullish or bearish sentiment to rise and fall, respectively, more than 15 percentage points in the span of just two weeks. For bearish sentiment, this was the 60th time that such a move has happened since the start of the survey with this week marking the largest two-week decline since January of this year as the market worked off of its 2018 lows.  That time actually saw a larger decline of 20.93 percentage points compared to 15.69 today. 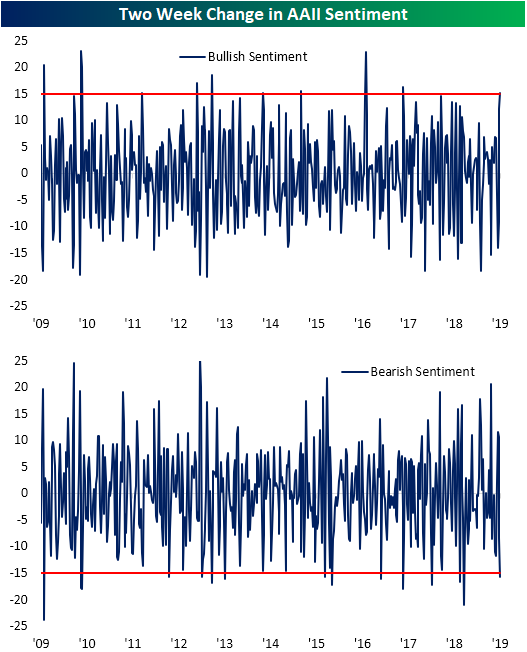 In terms of how the market performs following such sentiment changes, the picture is mixed.  The median performance of the S&P 500 has seen outperformance following similar instances one month, six months, and one year later, but underperformance over the next week and 3 months.  Across each of the past 31 occurrences, the S&P 500 has been higher more than half the time with the most consistent positive performance being one month and one year later; 71% and 74.2% of the time, respectively. The other periods have been positive about 60% of the time. Start a two-week free trial to Bespoke Institutional to access our interactive economic indicators monitor and much more.