As weak economic data over the past week has sparked selling in equity markets, the S&P 500 has experienced its worst first two days to a Q4 since 2009 with the index falling just a hair under 3% so far in October. As a result, bullish sentiment has also taken a fairly dramatic negative turn.  AAII‘s survey of investor sentiment only saw 21.37% of respondents report as bulls this week.  That is an eight percentage point decline from one week ago. While the first couple of weeks of August saw a much sharper decline of 16.78 percentage points, this most recent drop brings bullish sentiment to its second-lowest reading of the past year.  In fact, last December’s 20.9% was the only lower reading for bullish sentiment going back to 2016. Bullish sentiment is also now over one standard deviation below its historical average. 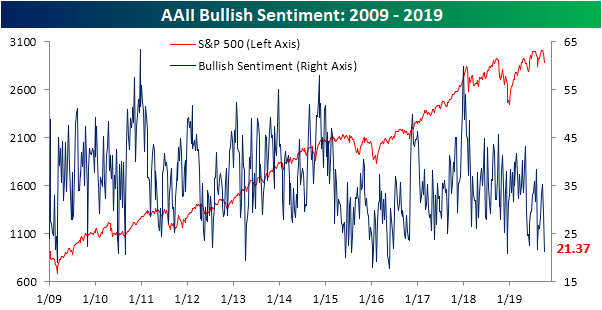 Pessimistic sentiment, rather than neutral, took the lion’s share of these losses as bearish sentiment rose to 39.44%. That is up 6.2 percentage points from last week’s 33.26% reading.  While bullish sentiment has come in lower only a few times in recent memory, bearish sentiment is now back to similar levels as August. The bull-bear spread is the widest (in favor of bears) since August as well. 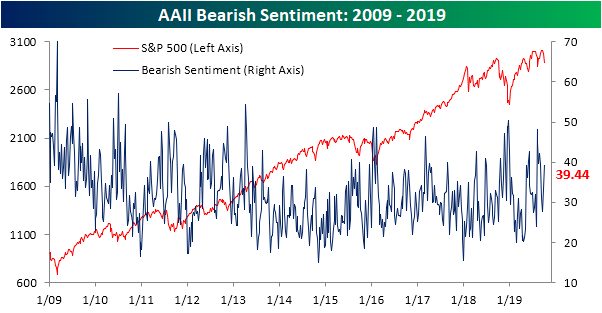 Although the largest share of losses to bulls did not go to the neutral camp, neutral sentiment nonetheless rose to 39.19%. As with bearish sentiment, this increase does not bring sentiment to any sort of historical high, but it is the highest level since late May.  Additionally, neutral sentiment is back to more elevated levels that had been observed throughout the first half of this year.  Start a two-week free trial to Bespoke Institutional to access our interactive economic indicators monitor and much more. 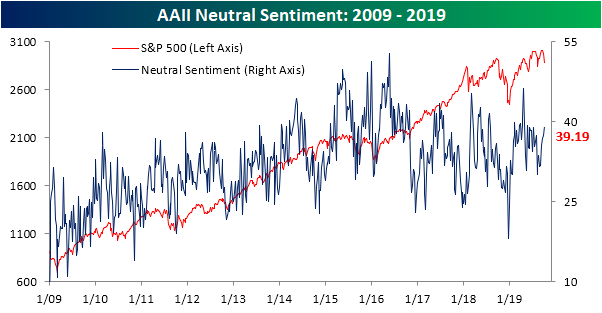