Despite a couple closes at all-time highs in the past week, the S&P 500 is currently right around the same levels as last Wednesday’s close.  With little in the way of price changes, sentiment has likewise seen little change.  Per AAII’s weekly survey, bullish sentiment rose just 0.42 percentage points to 40.72% from 40.30% last week. That small increase is in the bottom 5% of all week-over-week changes in bullish sentiment in the history of the data.

While little changed, the bulk of investors are still optimistic. Another sentiment survey from Investors Intelligence also echoed these results.  In that survey released yesterday, 57.6% reported as bullish. While that is the highest reading since July, it is up only around half of one percent from last week. 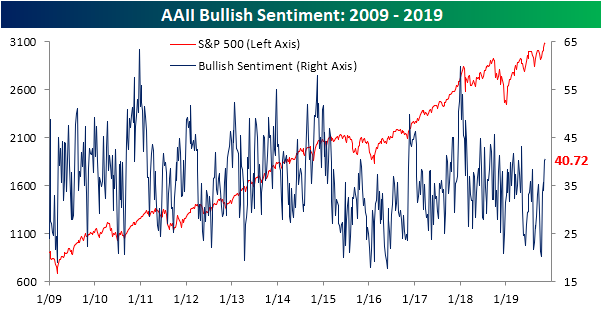 Bearish sentiment was also little changed. The percentage of investors reporting as pessimistic rose 0.89 percentage points to 24.82%.  Like bullish sentiment, the one week change in bearish sentiment was small relative to history with this week’s change sitting in the 7th percentile of all readings.  This week also marked the fourth in a row that bearish sentiment has been below its historical average. That is the longest such streak since a seven-week run from the end of March to early May of this year. 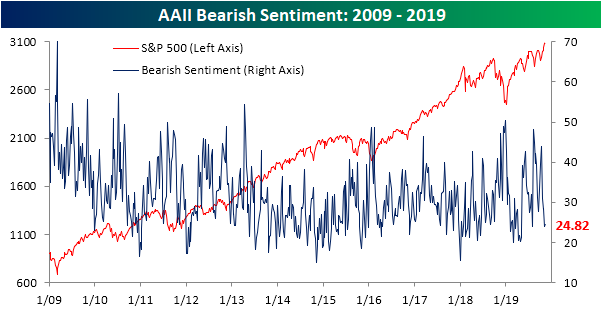 Neutral sentiment moved the most this week falling 1.31 percentage points.  Now at 34.46%, neutral sentiment is the lowest since early September and back in the middle of the past few years’ range.  Start a two-week free trial to Bespoke Institutional to access our interactive economic indicators monitor and much more. 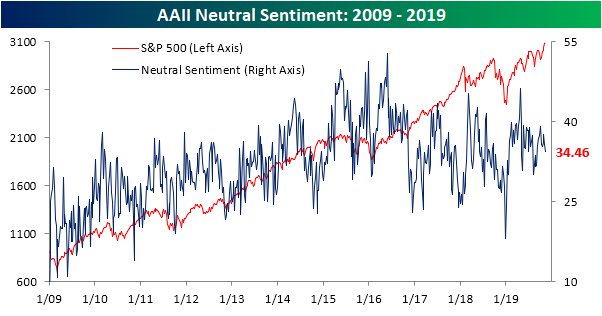