Overnight news that showed the number of confirmed coronavirus cases has spiked sent a negative tone rolling through markets today, but generally speaking, sentiment surrounding the issue has improved which has been reflected in higher prices for risk assets.  Given this, the percentage of respondents in AAII‘s weekly survey that have reported as bullish has risen to 41.33% from 33.87% last week. That 7.46 percentage point jump in bullish sentiment may sound like a lot but just one month ago bullish sentiment rose an even larger 8.76 percentage points to a similar reading of 41.83%.  Though it has improved, bullish sentiment is not overly extended as it is still within its normal historical range albeit near the upper end of said range. 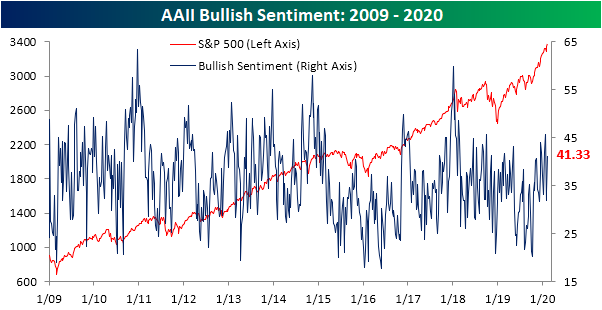 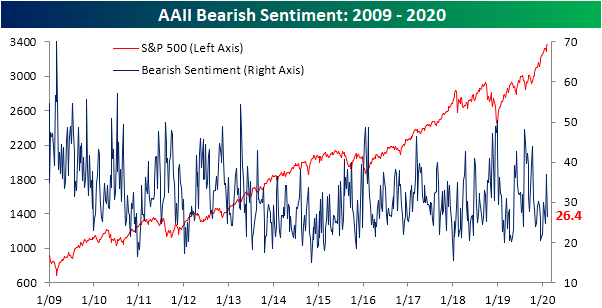 While bearish sentiment is down, not all investors have immediately jumped aboard the bullish ship.  An increased percentage of respondents considering themselves neutral also ticked higher this week rising to 32.27% from 30.91% last week. In spite of that increase in neutral sentiment, this week’s reading still stands in the 18th percentile of the past year’s readings. With neutral sentiment and bearish sentiment as low as they are, the general tone of sentiment continues to have a positive bias as investors have brushed off coronavirus concerns. Start a two-week free trial to Bespoke Institutional to access our interactive economic indicators monitor and much more. 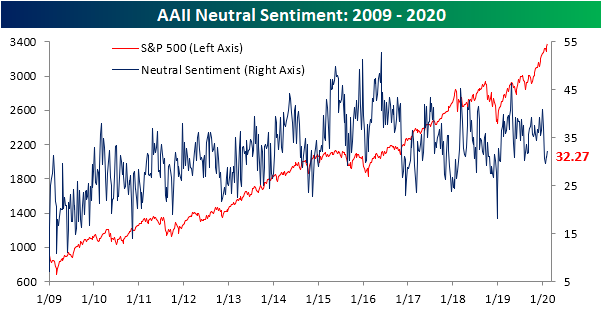