More hawkish monetary policy and the S&P 500 hitting the bear market threshold have given sentiment plenty of reason to turn lower, and that’s exactly what has happened. After reaching a short-term high of 32% only two weeks ago, the percentage of respondents to the AAII survey considering themselves bullish has fallen back below 20% this week.  That may not be as extreme of reading as those in the mid-teens from back in April, but, it is still a historically low reading and in the bottom 2% of all weeks going back to the start of the survey in 1987. 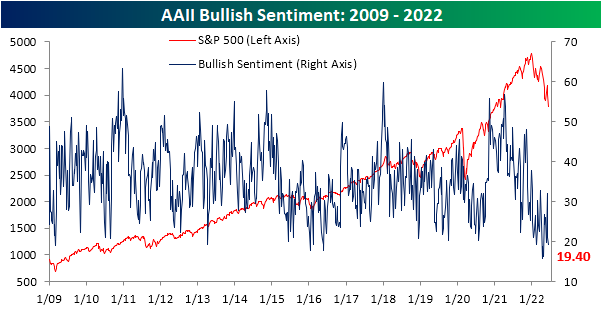 While bullish sentiment has declined, this week’s 1.6 percentage point decline was actually much smaller than the 11 percentage point drop last week.  An even bigger decline occurred for those reporting neutral sentiment.  That reading fell 9.9 percentage points from a recent high of 32.1%. Now at 22.2%, the percentage of neutral respondents is back down to the lowest level since the start of May. 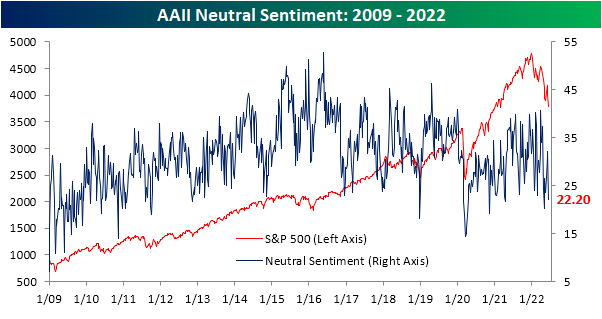 With both bullish and neutral sentiment falling, the bearish camp picked up the difference.  Heading into this week, bearish sentiment was already elevated at 46.9%.  The 11.4 percentage point bump this week means that well over half of respondents are now bearish with the current reading just 1.1 percentage points shy of the 59.4% high from the end of April. That ranks as the eleventh highest reading of all weeks on record. 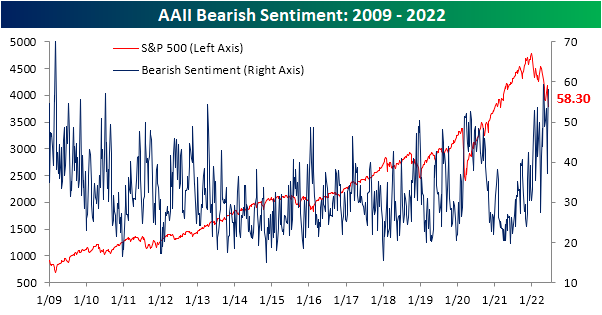 That also means the percentage of bears outweighs bulls by an astounding 38.9 percentage points and is the lowest reading since the last week of April. 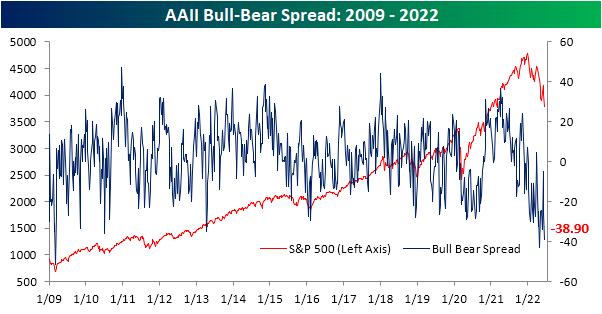 Not only do bears outweigh bulls by a large margin, but it has also been a historically long length of time that this has been the case.  Smoothing out the reading by taking a four-week moving average of the bull-bear spread, the average has been below -10 (in other words on average over a four-week span bearish sentiment has been at least 10 percentage points higher than bullish sentiment) for 21 straight weeks.  That surpassed another long 18-week streak in 2020 and is now only five weeks short of the record stretch of 26 weeks in the early 1990s. 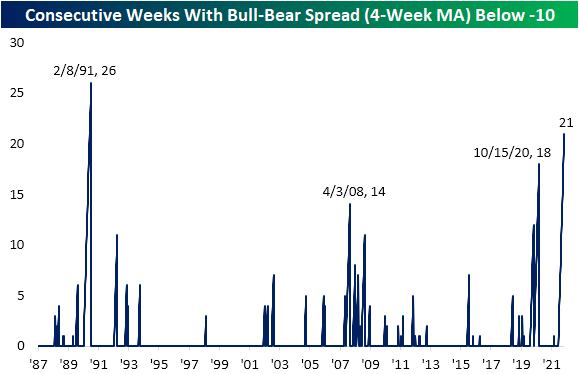 Not only has the AAII survey showed souring sentiment, but so too have the weekly NAAIM Exposure Index and the Investors Intelligence surveys. This week, the NAAIM index showed investment managers only have 32.2% long equity exposure. Meanwhile, the Investors Intelligence survey saw the most negative bull-bear spread in a month.  Normalizing each of these three sentiment indicators, the average reading is now 1.28 standard deviations from the historical norm. That is not as bad as last month, but it remains a historically pessimistic reading on sentiment.  Click here to learn more about Bespoke’s premium stock market research service. 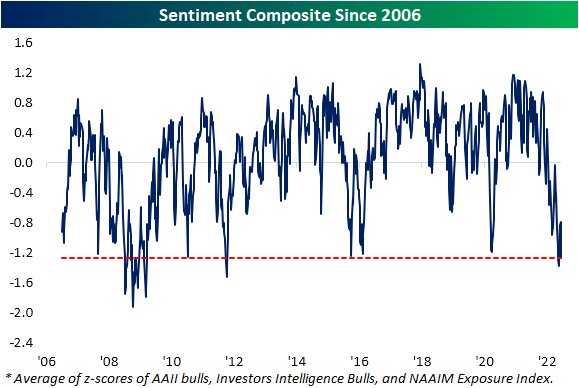