Sentiment Stagnant While Stocks Have Surged

If you pay attention to the stock market, at some point over the last 5 to 10 years, you’ve likely heard the line that “this is the most unloved bull market in history.”  The chart below provides a solid portrayal of that statement as it shows the rolling 52-week average of the weekly AAII Bullish Sentiment reading.  This survey is conducted by the American Association of Individual Investors and is meant to gauge individual investor sentiment levels towards the US stock market.  During the 1990s, this reading generally trended upwards, but it has actually now trended downward for the last 15 years as a series of lower highs have been made.  These lower highs have come as the S&P 500 has consistently made new all-time highs in recent years and doubled the level it was at back in early 2000.

As you can see in the chart, the first 50% decline that the S&P experienced when the Dot Com bubble burst didn’t cause individual investors to completely throw in the towel.  While the 52-week moving average of bullish sentiment fell along with the S&P 500 during the bear market from 2000-2002, it spiked to record highs in the early stages of the 2003-2007 bull market.  It wasn’t until the second 50% decline for stocks in less than 10 years that individual investors started to totally turn their backs on stocks.  Since the Financial Crisis from 2007-2009, the 52-week moving average of bullish sentiment hasn’t come close to reaching levels routinely seen in the mid to late 2000s.  Instead, it has faded and faded as the S&P has marched higher and higher.

The previously mentioned two 50%+ drops for stocks in less than ten years has certainly caused permanent scars for an entire generation of investors.  Demographics are probably another factor for the long-term downtrend in AAII Bullish Sentiment.  Older investors tend to be more cautious, and we have to assume that the age cohort of the respondents to the weekly AAII survey has increased over time.  Want more research from Bespoke?  Start a two-week free trial to one of Bespoke’s premium research services. 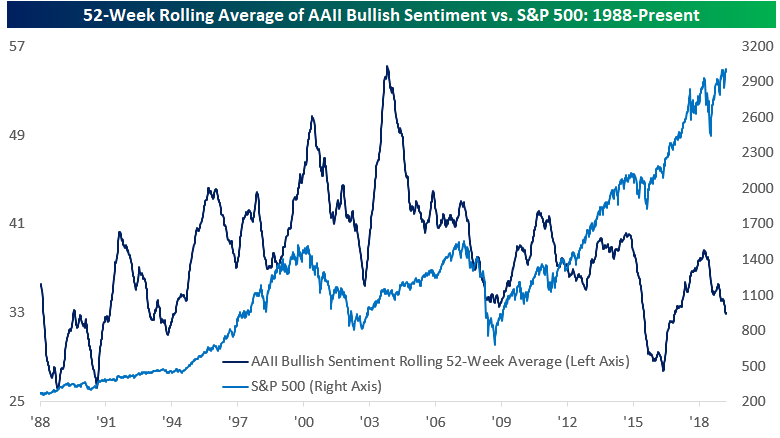