Sentiment has come down over the past week according to survey data from AAII. The percentage of respondents reporting bullish sentiment fell over 10 percentage points this week down to 30.43%. That is the lowest level of bullish sentiment in the past few months but it could also be much lower, especially considering how much equities have fallen in the past week. As recently as October bullish sentiment was around 10 percentage points lower at 20.31%. Furthermore, while this brings it below the historical average for bullish sentiment (38.08%), from current levels it would need to fall roughly another 2.5 percentage points to be a more extreme 1 standard deviation below that average. Additionally, this past week’s drop was large, in the fourth percentile of all weekly changes of the past five year’s readings, but only a few weeks ago at the end of January we witnessed an even larger decline of 13.62 percentage points. Overall, while sentiment has come crashing down, it seems to be a bit more modest of a decline when compared to the rapid 8.75% drop in the S&P 500 since the results of the last survey. 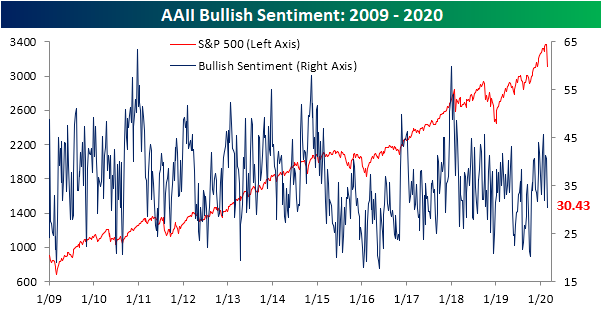 As could be expected, the losses in bullish sentiment were picked up by the bearish camp this week as AAII’s reading on bearish sentiment rose from 28.7% to 39.13%.  As with bullish sentiment, while that was a large increase in the 95th percentile of the past five year’s weekly changes, we saw an even larger rise of 12.09 percentage points just a few weeks ago at the end of January. This is the highest level bearish sentiment has been since October 10th when it had reached 43.96%. 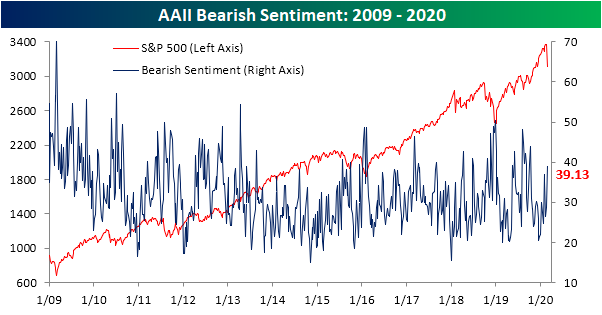 Neutral sentiment, on the other hand, was little changed this week at 30.43%. Rather than showing caution, investors seemed to have immediately gone from bullish to bearish in the past week. Start a two-week free trial to Bespoke Institutional to access our interactive economic indicators monitor and much more. 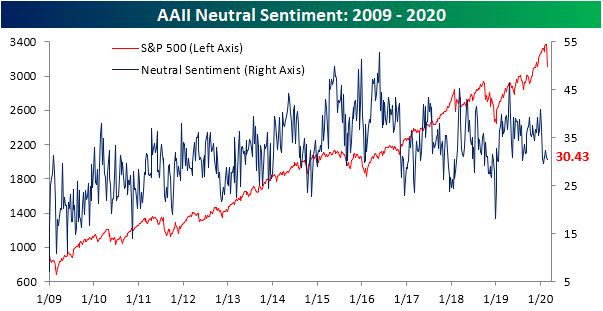