Sentiment Sits Out The Rally

As equities have rebounded from coronavirus fears in the past week, reaching fresh all-time highs, sentiment has not shared in the gains as it continues to hold a slight bearish bias.  AAII’s reading on bullish sentiment rose slightly from 31.98% last week to 33.87% this week.  While higher than last week, it was not nearly as large an increase as you would expect given the market rebound. 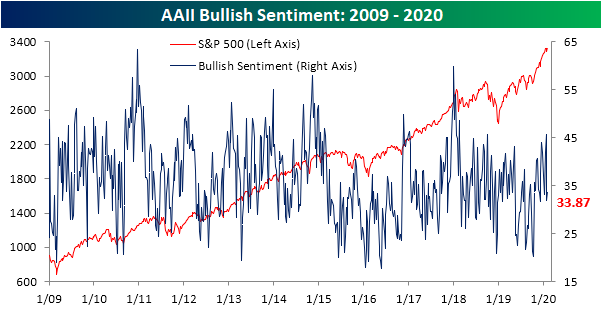 AAII’s reading on bearish sentiment ticked down 1.64 percentage points to 35.22%.  That is still well above the lows in the 20s that have been observed over the past few months.  With both bullish and bearish sentiment little changed, the bull-bear spread remains in the bear’s favor for a second week in a row. 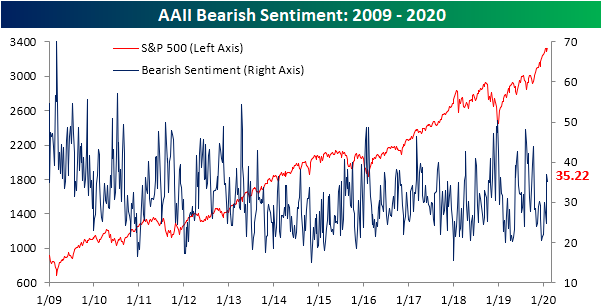 Neutral sentiment was also little changed this week falling just 0.26 percentage points to 30.91%. This week marked back-to-back weeks with a greater share of respondents reporting bullish or bearish sentiment than neutral. That has not been the case much over the past year as the last time neutral sentiment did not outweigh either bullish or bearish sentiment was the final week of December and the first week of January of last year. 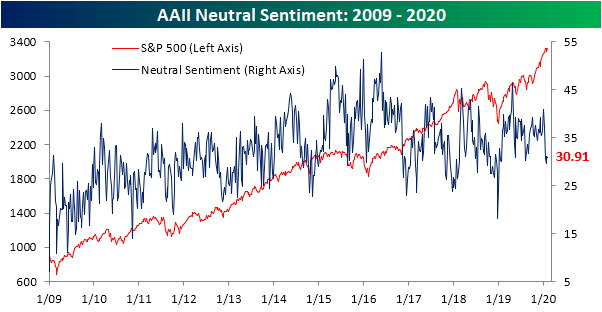 Again, although prices have moved higher in the past week, sentiment has not. While AAII results were little changed, another sentiment survey, the Investors Intelligence (II) sentiment survey is more prominently echoing a bearish bias.  This survey’s reading on bullish sentiment actually fell from 58.9% to 55.1%; the lowest since early December.  Bearish sentiment from this survey, on the other hand, rose to its highest level (17.8%) since November.

In addition to asking for bearishness and bullishness, the II survey also checks on the percentage of respondents that are “looking for a correction.”  Since the beginning of the data, it has averaged ~25%, but over the past decade, it has generally been higher, averaging 29.6%. More recently, though, these readings have been more muted, but the five percentage point increase this week on top of a 5.6 percentage point increase the week before has brought the indicator to 33.3%; its highest reading since the fall. In fact, up until this move it was below 30% for 15 consecutive weeks. 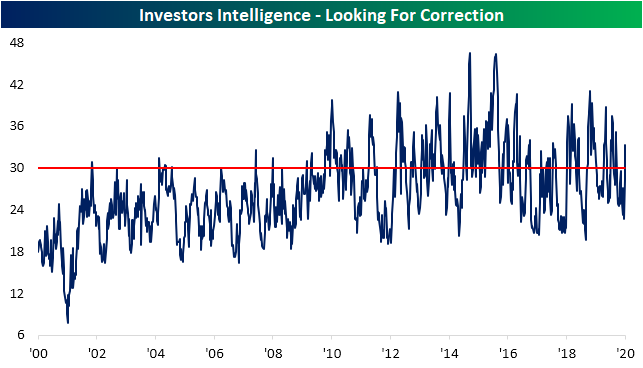 While that is not any sort of extreme reading at ~33%—with a history of much higher readings over the past several years—that aforementioned streak is perhaps more notable.  Since 2000, there have only been 13 other such streaks in which Investors Intelligence’s reading on “looking for a correction” rose above 30% after not having done so for 15 weeks or more. The last time this happened was in October of 2018. Following past occurrences, returns for the S&P 500 have actually been stronger than normal one week, one month, and 6 months out, but 3 months and one year later, the market has experienced underperformance. Granted, one year out the S&P 500 has been higher 79.92% of the time. Start a two-week free trial to Bespoke Institutional to access our full suite of research and interactive tools. 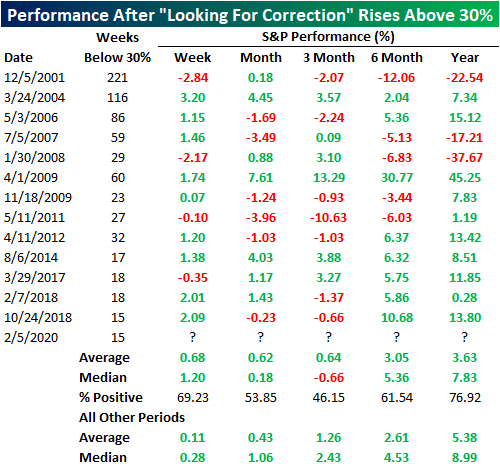