Fresh all-time highs in the major indices have finally boosted investor confidence as per AAII data. Rising to 40.3% from 33.98% last week, the percentage of bullish investors rose to the highest level since early May when it was 43.13%.  The past four weeks have seen bullish sentiment surge by just under 20 percentage points off of the low of 20.31% in early October.  The last time that optimism has risen as rapidly in a four week span was from December of 2017 to January of 2018 when it rose 22.9 percentage points. At that time, sentiment reached much more extreme levels, topping out at 59.75%. 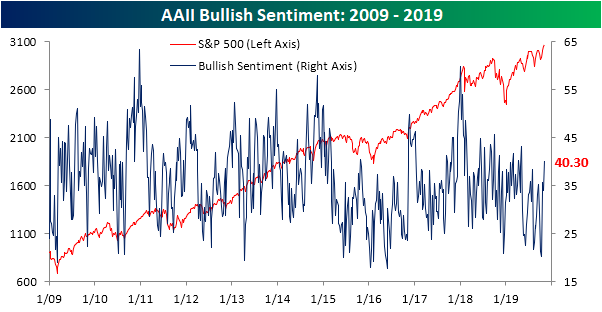 Given the bullish surge, bearishness has unwinded.  After reaching its recent high of 44% last month, bearish sentiment has fallen all the way down to 23.93%.  That is the lowest reading since May. As with bullish sentiment, the move over the past four weeks has been substantial.  In fact, the 20.03 percentage point decline is the largest since March of 2016 when bearishness dropped 24.32 percentage points. 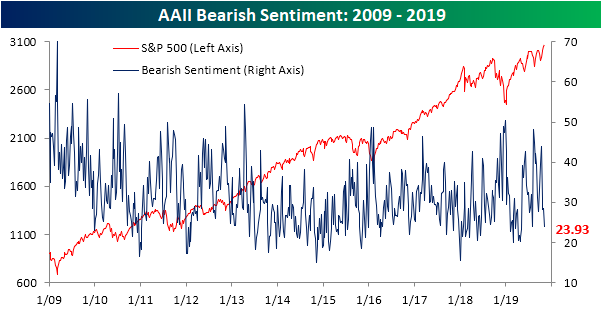 Bulls not only took from bears this week, but neutral sentiment also fell down to 35.77%.  Unlike bullish and bearish sentiment, that move was much smaller at only 1.82 percentage points as neutral sentiment is now right back to similar levels as last month.  Start a two-week free trial to Bespoke Institutional to access our interactive economic indicators monitor and much more. 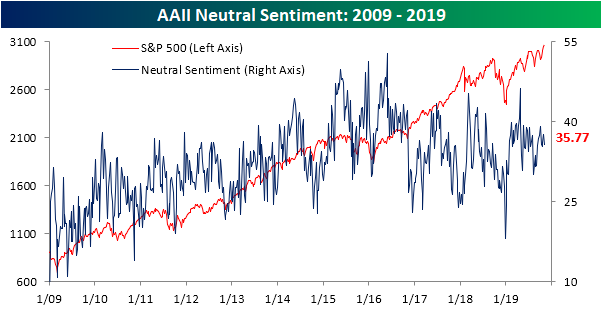