Although there has not been any sort of dramatic breakout to the upside as the index has fallen over the past few days, the S&P 500 did manage to tag new record highs in the past week for the first time since May 10th.  The record-high milestone has done little to shift sentiment though. The AAII survey of individual investor sentiment saw its reading on bullish sentiment rise 0.9 percentage points to 41.1%.  While higher, that is still three points below the reading from just a couple of weeks ago. 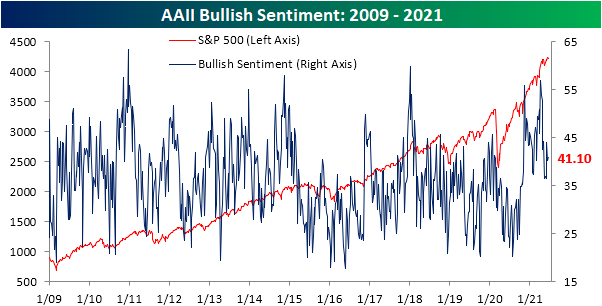 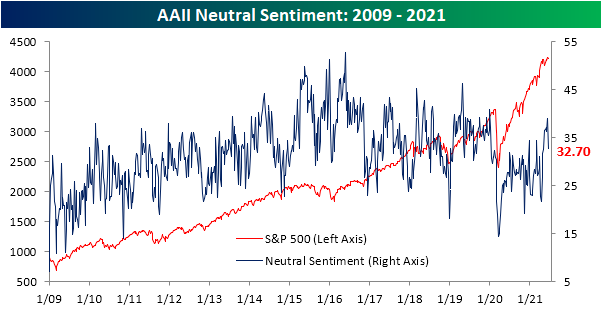 The past couple of weeks have seen historically muted readings on bearish sentiment.  While that is still the case with this week’s readings remaining at the low end of its historical range, bearish sentiment saw a big 5.5 percentage point gain rising to 26.2%. That one-week uptick in bearish sentiment was the largest since last September. It also marked the first time since the end of last month that over a quarter of respondents reported as bearish. While the move was not nearly as large, the Investors Intelligence survey echoed that increase in bearish sentiment with the bull-bear spread in that survey falling from 38.3 to 37.8 after inverse moves in bullish and bearish sentiment. In other words, broadly speaking, optimism has appeared to have peaked for the time being.   Click here to view all of Bespoke’s membership options. 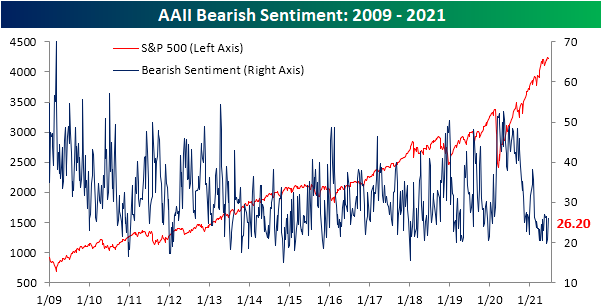