Over the past week, mounting geopolitical tensions have kept markets on their toes. As of today, equity markets have recovered whatever losses there were, but sentiment has still taken a hit.  The percentage of bullish investors in the weekly AAII survey has fallen for a third straight week down to 33.07%.  This is the lowest level of bullish sentiment since the first week of December when 31.72% of respondents were bullish.  Granted, these declines have not brought bullish sentiment to any sort of extremely low level. In fact, it is now just about in line with the average reading of the past year, 33.41%. If anything, this move appears to be mean reversion as bullish sentiment headed into 2020 had actually gotten pretty extended as we had highlighted in our Pros and Cons report last week. 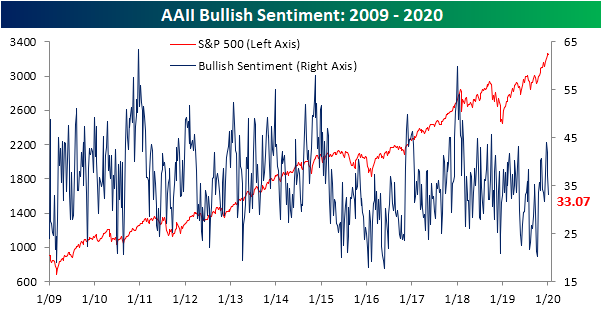 While most of the decline in bullish sentiment in last week’s survey went toward neutral sentiment, this week’s results showed that investors were more firmly bearish borrowing from both the bullish and neutral camps.  Nearly 30% of investors reported as bearish this week which was an 8.01 percentage point increase from last week.   That marked the third-largest one week jump in bearish sentiment of the past year.  Granted, this increase was also about a third and half the size, respectively, of the past two larger increases of 24.14 percentage points in August and 16.11 percentage points in May. Despite the relatively large move higher, bearish sentiment is now right in line with its average of 30.3% over the past year. 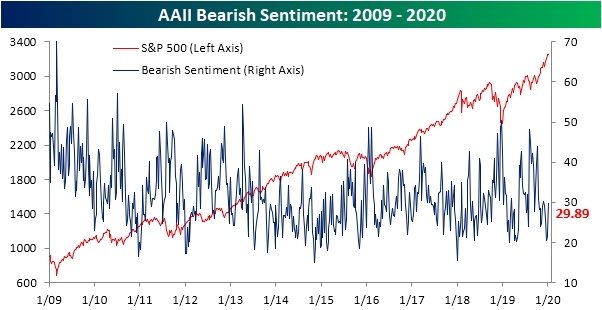 As previously mentioned, the gain in bearish sentiment took from those previously reporting as neutral. After reaching 40.91% last week, the highest level since Apri, neutral sentiment has moderated falling down to 37.04%.Start a two-week free trial to Bespoke Institutional to access our interactive economic indicators monitor and much more. 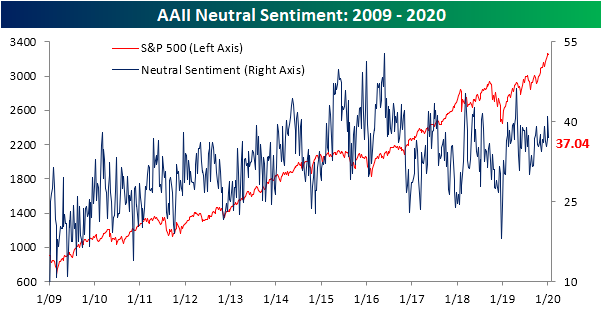