In the week leading up to Christmas, large-cap equities have made a modest move lower with the S&P 500 ETF (SPY) down 0.28% over the past five days.  Meanwhile, small caps have continued to surge.  With equities overall mixed based on market cap, bullish sentiment has held steady this week.  The percentage of investors reporting as bullish in the weekly AAII survey was slightly higher coming in at 43.57%, up 0.14 percentage points from last week.  Given the reading on bullish sentiment did not change much, sentiment remains elevated relative to most readings over the past several years, though, there is not the same exuberance as back in November. 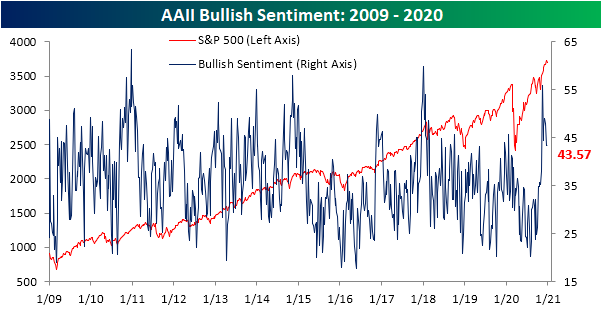 Although bullish sentiment didn’t move very far, bearish sentiment took another leg lower. The percentage of respondents reporting a pessimistic outlook for the market fell from 26.29% to 21.99%. That is the lowest reading on bearish sentiment since the first week of 2020 when it was just 0.09 percentage points lower. 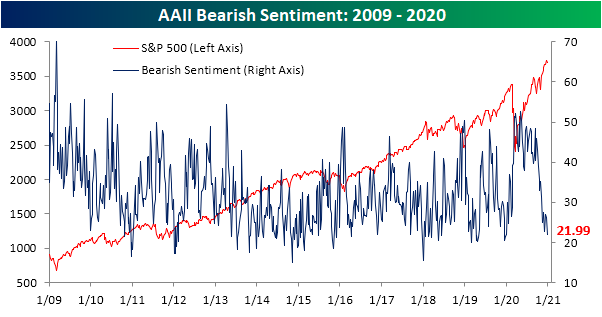 The inverse moves in bullish and bearish sentiment have led the bull-bear spread to move further in favor of bulls.  The spread rose to 21.58 which is not at any sort of a new high after peaking above 30 in mid-November but remains at the high end of the past several years’ range. 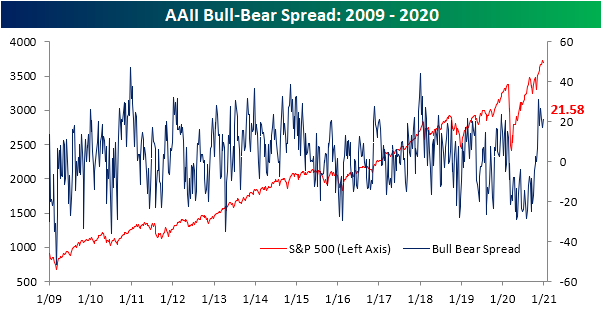 Relative to the big drop in bearish sentiment, bullish sentiment’s move was tiny.  That means the percentage of investors reporting as neutral on the market picked up the losses in bearish sentiment.  34.44% of respondents reported as neutral this week, up 4.16 percentage points from last week.  Similar to bearish sentiment, that brings the reading back up to where things stood in the first couple of weeks of the year. Unlike bearish sentiment which is at the low end of its range, this reading for neutral sentiment is also much more historically normal after being muted all year.  Click here to view Bespoke’s premium membership options for our best research available. 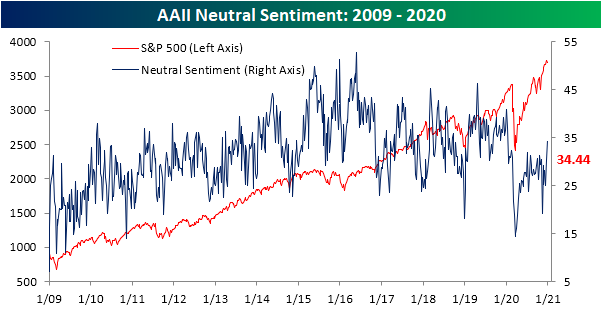