As the major indices continue to establish fresh record highs in the past week with the Nasdaq eying an eleventh consecutive up day today, sentiment has actually not shared in moving higher. The reading on bullish sentiment from the AAII fell this week down to 41.89% from 44.1% last week.  Although it is still elevated, currently in the 96th percentile of the past year’s readings, bullish sentiment is less extended than last week and is now back within one standard deviation of its historical average. 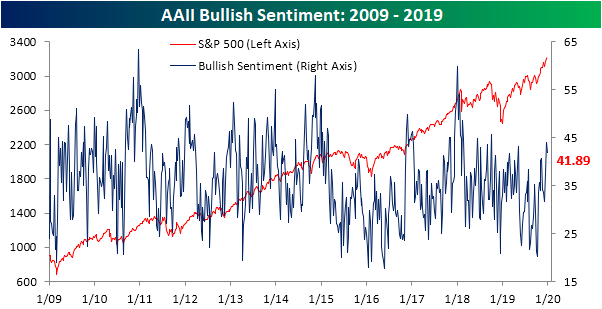 As could be expected, the drop in optimism has led to a slight increase in those reporting as bearish.  Bearish sentiment rose just about 1 percentage point this week to 21.53%. As with bullish sentiment, while off of the lowest levels, bearish sentiment is still low relative to where things have stood recently with this week’s print in the bottom decile of the past year’s readings. 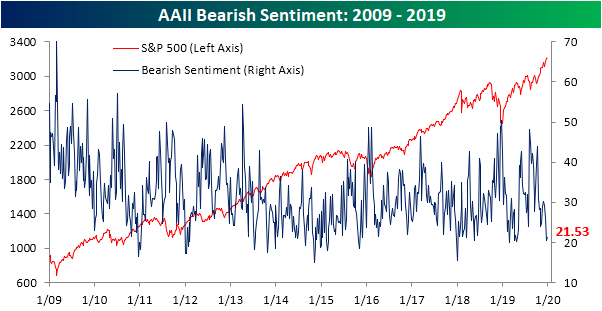 Neutral sentiment also borrowed from the losses in bullish sentiment as it rose to 36.58%.  While bullish and bearish sentiment levels are at some of their highest and lowest levels of the past year, respectively, the small increase this week in neutral sentiment only leaves it in the middle of its recent range.  Start a two-week free trial to Bespoke Institutional to access our interactive economic indicators monitor and much more. 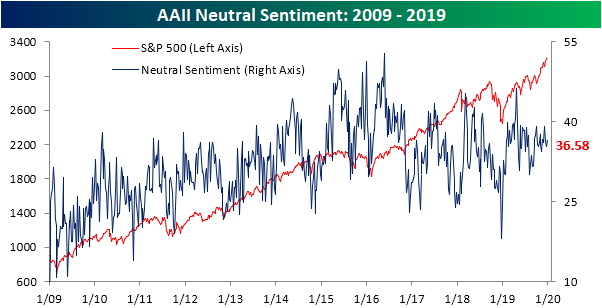