Sentiment In A Food Coma

The American Association of Individual Investors released their weekly survey tracking investor sentiment, and in spite of even more record highs being put in place in the past week, the survey’s results did not show any major shifts and bullish sentiment remains below the historical average. The percentage of bullish respondents fell slightly this week (0.6 percentage points) down to 33.6%. 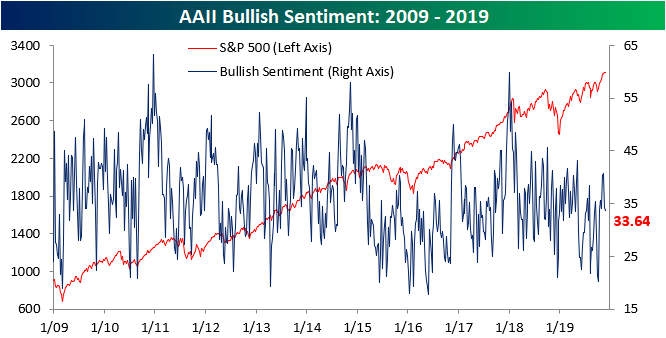 Bearish sentiment saw a similarly small move this week rising by 1.25 percentage points, moving back above 30% for the first time since mid-October.  While the percentage of investors reporting as bearish is well off of the recent low of 23.93% put in place earlier this month, it is also at the lower end of the past several months’ range and just slightly lower than the historical average of 30.36%. 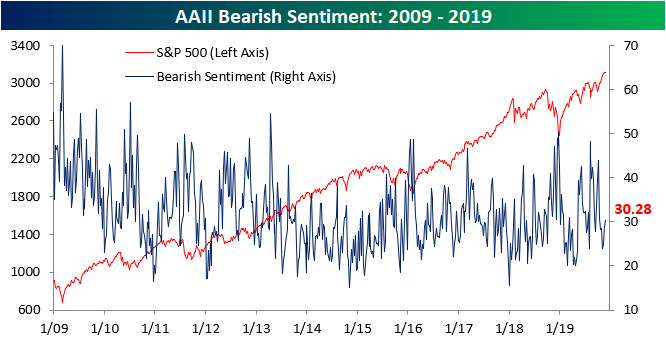 Neutral sentiment saw a roughly equivalent move to bullish sentiment falling 0.63 percentage points.  For most of 2019, neutral sentiment has been consistently elevated relative to the past few years with the move this week leaving the reading in the middle of its recent range. As we discussed last week, neutral sentiment has been above its historical average for a pretty long time, and this week’s reading was the 16th straight making it the longest streak of above-average readings since 2017.  While above its historical average, as with bullish and bearish sentiment, it is still within a normal range (within one standard deviation of the average). 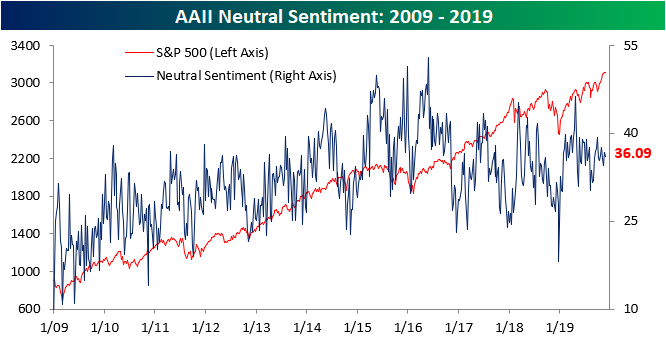 Unlike the S&P 500 and other major equity indices that have ripped higher this November, sentiment has remained rather subdued. As shown in the chart below, typically when the S&P 500 has reached record highs sentiment across the board has leaned more bullish than it currently is.  Since the AAII survey began in 1987, bullish sentiment has averaged 40.9% when the S&P 500 closed at a record high. That is a 6.7 percentage point difference from where things currently stand.  Even in regards to the current bull market beginning in 2009, all-time highs have typically seen bullish sentiment more elevated. Likewise, bearish and neutral sentiment is higher than the average for other all-time highs both since 1987 and in the current bull market.  Despite this, there have been plenty of other record highs where sentiment has been even more subdued.  Out of all the record S&P 500 highs since the survey began, the current reading on bullish sentiment is only in the 20th percentile.  So while it is low, it could also be much lower. 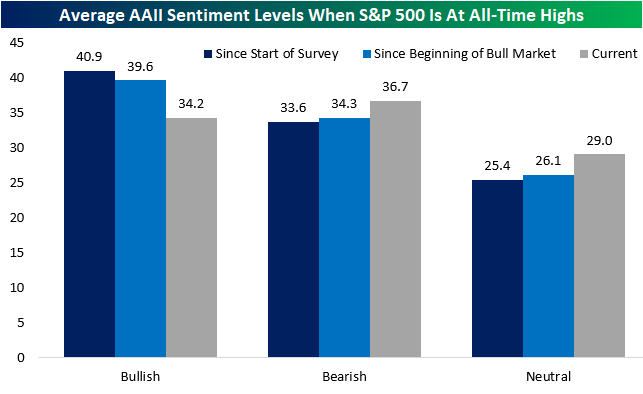 While AAII’s survey did not see any major changes this week, another investor sentiment survey from Investors Intelligence was perhaps more notable.  That survey’s reading on bullish sentiment has been consistently grinding higher over the past quarter with increases in all but two weeks.  Rising again this week to 58.1%, bullish sentiment by this measure is the highest since October of last year when it was 61.8%. 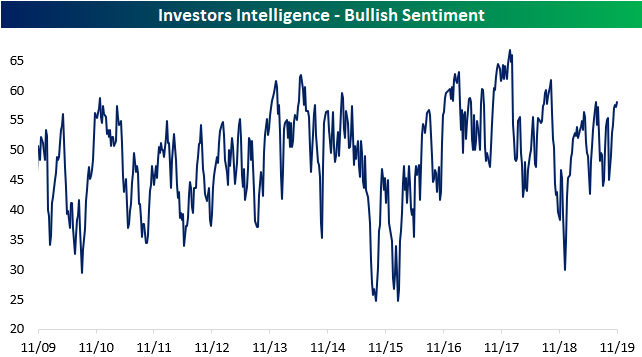 The Investors Intelligence survey also gauges investor expectations for a correction.  That reading fell again this week marking the tenth decline out of the past twelve weeks. While not a new low, this indicator is also sitting around levels that have not been observed since October of last year. Start a two-week free trial to Bespoke Institutional to access our interactive economic indicators monitor and much more. 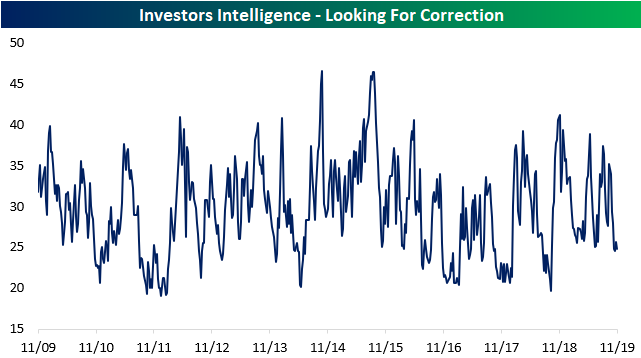