The National Association of Home Builder’s measure of homebuilder sentiment fell again in March. Although the index’s 2 point decline down to 82 leaves it 8 points off the November record high, the current level of sentiment is still a few points above the pre-pandemic record high.

A decline in present sales drove that decline as the index fell 3 points from 90 to 87.  As with the headline number, although that is a decline from the peak of 96 in November, the current reading is still above anything recorded prior to the pandemic.  Additionally, considering the indices for Future Sales and Traffic have held up better, that decline in Present Sales does not necessarily point to a broader downturn in demand. Even though Present Sales were lower, the index for Future Sales rose by 3 points recovering the ground lost in February while Buyer Traffic also avoided a decline as that index went unchanged from February. Again rather than a broader deterioration of conditions, the decline in Present Sales could be a result of issues like rising prices of things like lumber and higher mortgage rates which in turn means overall higher costs of a new home. 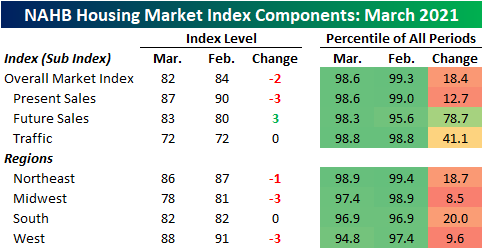 The South was the only region to avoid a decline in March.  That index held steady at 82 for the third month in a row. The Northeast also fared a bit better than the other regions as the index only fell one point from last month’s level that was tied with October for a record high. The Midwest and the West fell more sharply with each index dropping 3 points.  Regardless of those declines, both indices continue to come in at historically strong levels.

With the weaker headline release providing a bit of a headwind in terms of catalysts, the iShares Home Construction ETF (ITB) is fighting to break out and hold above its early February highs today.  Last week it unsuccessfully tried to take out resistance, but still remains right below its prior highs. 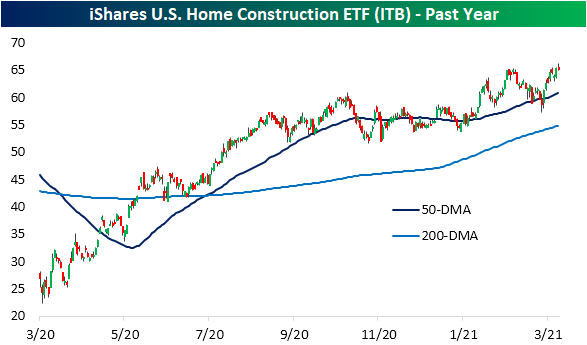 Looking across S&P 1500 homebuilder stocks, there are two in our Trend Analyzer tool that currently earn “good” timing scores: TopBuild (BLD) and NVR (NVR). Whereas the broader group is testing 52-week highs, BLD and NVR are some of the few that are not currently overbought having recently pulled back a bit.  After taking a brief dip below its 50-DMA late last month, BLD has been fluctuating around its moving average over the past few days. NVR on the other hand was unsuccessful in breaking out last week which was followed by a successful bounce off of its 50-DMA yesterday.  Start a two-week free trial to Bespoke Institutional to access our interactive economic indicators monitor and much more. 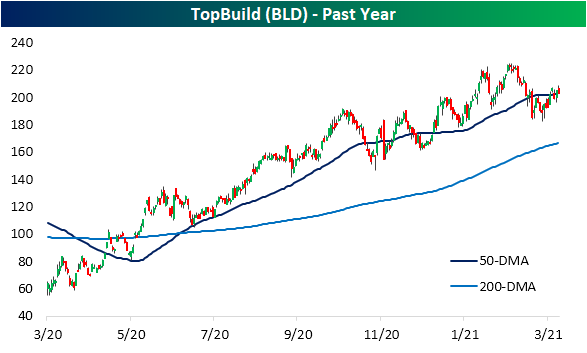 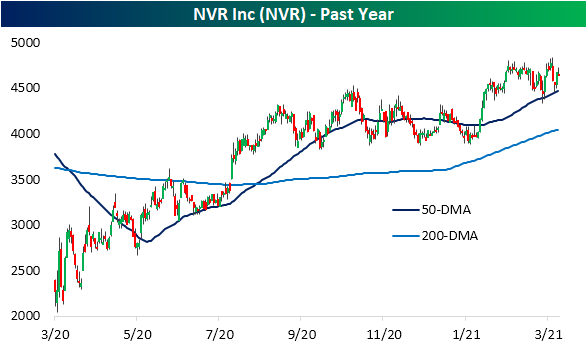