Sentiment Goes the Other Way of Price

The S&P 500 has risen around 2.5% to new record highs and crossing the 4,000 milestone in the past week.  Despite this, optimism took a slight step back this week. The Investors Intelligence survey of newsletter writers released yesterday saw a lower share of respondents report as bullish; down from 57.4% last week to a three-week low of 54.4%. After coming in at the highest level in three months last week, the AAII’s sentiment survey also saw fewer respondents reporting as bullish.  Last week, over half of respondents reported as bullish for the first time since November.  Today, that reading has fallen to 45.8%.  Despite the less optimistic tone, the 5.1 percentage point decline was the largest single-week drop in bullish sentiment since only the first week of March and the current level still stands in the top decile of the past five years. It is also over 7 percentage points higher than the historical average of 38%. 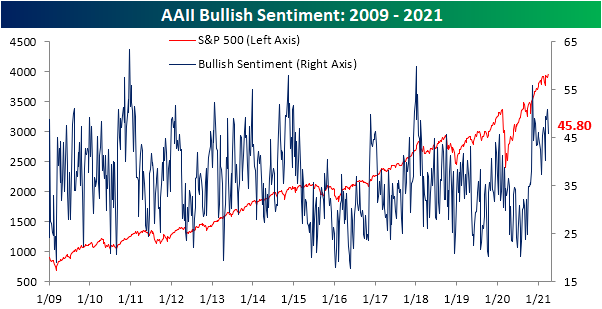 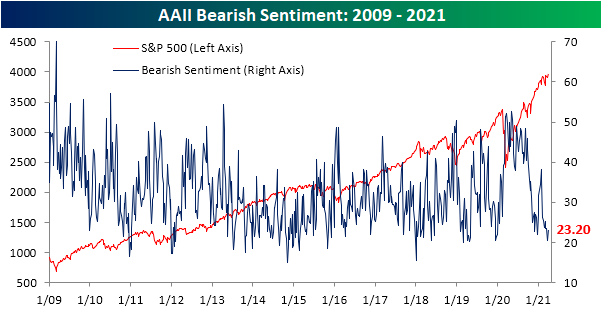 Those inverse moves in bullish and bearish sentiment have resulted in the bull-bear spread falling 2.7 points to 22.6.  While that indicates a less optimistic tone than last week, the current reading shows that sentiment continues to largely favor the bulls. In fact, even after pulling back, the current reading sits in the top 5% of all weeks of the past 5 years. 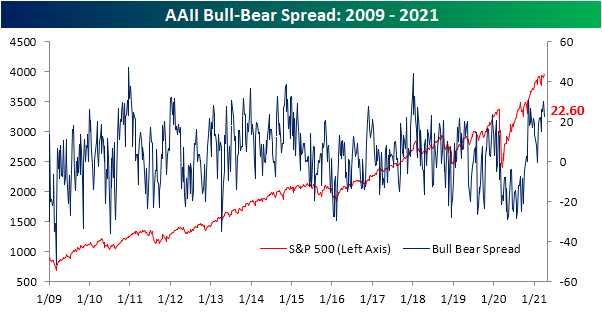 While fewer respondents reported as bullish this week, not all of those jumped ship to the bearish camp.  Neutral sentiment picked up the difference rising 2.5 points to 31%. That is the first reading of over 30% and the highest since the first week of March when it had risen to 34.4%. While that is an elevated level relative to the past year in which sentiment has become more polarized between bullishness and bearishness, the current level of neutral sentiment is actually just below the historical average of 31.41%.  Click here to view Bespoke’s premium membership options for our best research available. 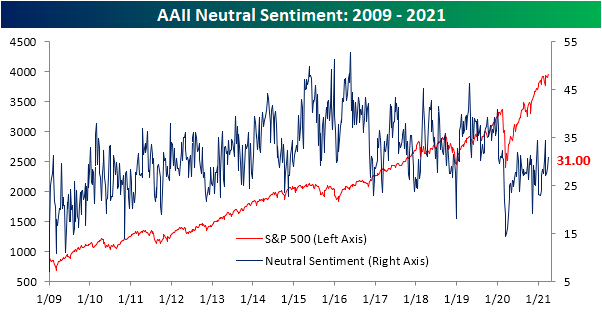