We’ve been discussing the very recent underperformance of the semiconductors for a few weeks now ever since the group’s relative strength versus the S&P 500 peaked back in early November.  In the last week, the Philadelphia Semiconductor Index (SOX) has made a nice recovery off of its early December low, and in that rally, it also broke its intraday downtrend that had been in place since the SOX’s 11/15 intraday high.  In yesterday’s trading, the group made a higher high but then faded in the afternoon finishing both near its intraday lows as well as right above the downtrend line that was previously broken last week.  Over the coming days, this 1,710 – 1,715 level will be a key one to watch to see if key support can hold.  Sign up using our 2020 Annual Outlook Special to gain access to our full report between now and year-end which covers the market from just about every angle imaginable! 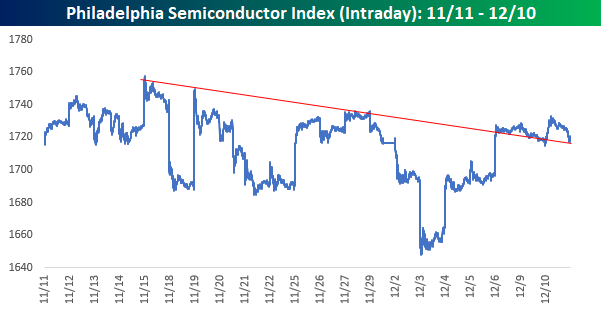