Breadth has been all-around bad recently. For example, as we highlighted in our Sector Snapshot, the 10-day advance-decline lines for the S&P 500 and the Tech sector are hovering close to the lowest levels since March 2020. We’re about as oversold as it gets from a short-term trading perspective.  The semis are starting to break down too.  Today, assuming it keeps up the pace of declines, the Philly SOX index is looking to close below its 200-DMA for the first time since the spring of 2020 as the uptrend off the COVID lows is on the ropes. 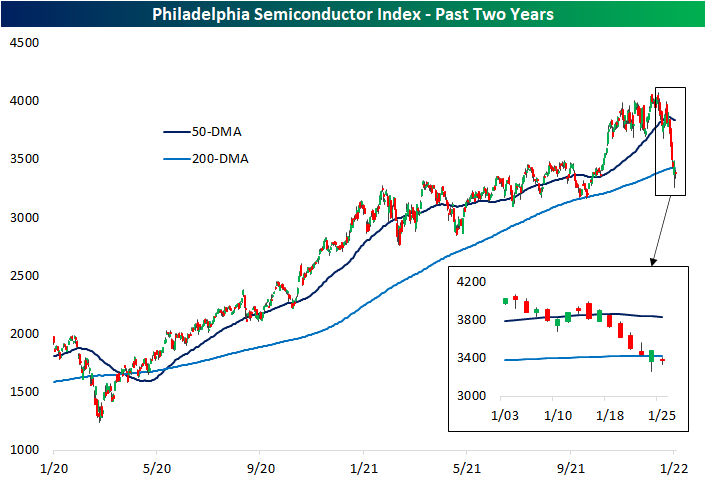 It has been well over a year since the Philadelphia Semiconductor index, or the SOX, has last closed below its 200-DMA.  Assuming no historic jaw-dropping afternoon rally the likes of which haven’t been seen since…yesterday, the group is looking to end a 435 trading day streak of closes above its 200-DMA.  Going back through the history of the index beginning in the mid-1990s, there have only been three streaks that have gone on for longer. 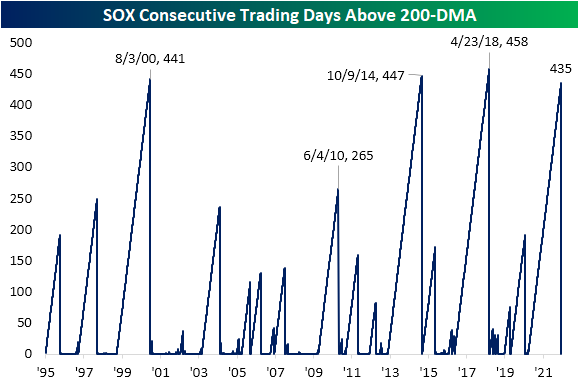 While it is not a particularly large sample size, given its reputation as a leading sector, we wanted to highlight the performance of the semis and the broad market after long streaks above the 200-DMA for semis come to an end.  The only outright consistently negative performance in the following weeks and months was in 2000 during the dot com bust following the end of the streak in August 2000. Overall, median performance one week and one month later has been far stronger than the norm for the semis, Tech, and S&P 500.  Going further out, things are more mixed relative to each index’s respective norm. For example, the semis are typically worse than normal 3 and 6 months out but have a larger than normal median performance one year out.  Technology and the S&P 500 more broadly, meanwhile, have seen worse than normal performance 6 and 12 months out and inline performance 3 months later.