Over the last year, the performance of semiconductor stocks has been highly correlated to that of software stocks. Over the last 12 months, the median 50-day rolling correlation coefficient between the iShares Expanded Tech-Software Sector ETF (IGV) and the iShares Semiconductor ETF (SOXX) was +0.77. Currently, the 50-day rolling correlation coefficient is 0.59 due to a recent divergence between the performance of the two ETFs, and since the start of November, the two ETFs have actually been inversely correlated (-0.31). As you can see in the chart below, SOXX has significantly outperformed IGV since the start of November. gaining 11.7% versus a 6.6% decline for IGV. 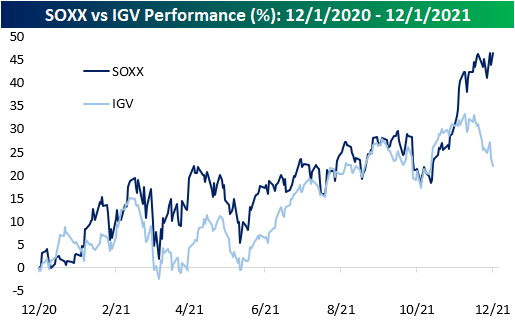 As implied by the chart above, the relative strength of SOXX vs IGV has moved upwards since the start of November. Although SOXX has mostly outperformed IGV over the last 12 months, the difference between the two is currently the largest of the last 12 months with a 24 percentage point spread between the performance of the two ETFs. 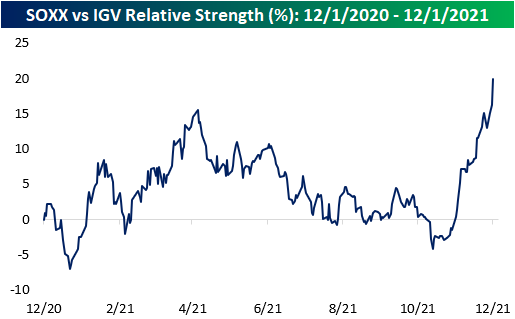 Looking back over time, when we have seen similar performance disparities where SOXX outperforms IGV by 15 percentage points or more in a month (with no prior occurrences in the prior three months), forward performance has been mixed. In terms of the next week’s performance, in two of the three prior periods, SOXX underperformed over the following week, but over the following month and three months, SOXX continued to outperform.  A sample size of three is on the small side, and even with just three occurrences there is no clear trend in performance, so we wouldn’t read too much into the results. Click here to view Bespoke’s premium membership options.