Sell In May In Full Effect

If there is any week this month that the “Sell in May” saying would apply, it would be the current one.  As shown in the screenshot of our Seasonality Tool below, the S&P 500’s median performance one week from the close on May 10th over the past ten years has been a 1.27% decline.  That ranks in the bottom 1% of all days of the year.  The only two days with worse median weekly performance over the past ten years have been March 16th’s 1.32% loss and a 1.47% loss from the week after January 21st.  Although seasonality is not on the side of the S&P 500 in the near term, performance has typically been stronger one and three months out with median gains of 0.97% and 3.2%, respectively.  That is not to say those are notably strong readings, though, as those median gains are middling versus other periods of the year.

Giving some more color to this, in the chart below, we show the 5-day performance of the S&P 500 from May 10th (or the nearest prior close in the case of years that May 10th did not fall on a trading day) for all the post-WWII years.  Again, the S&P 500 has been seasonally weak over the past decade with a median decline of 1.27%.  That seasonal weakness also extends slightly further back for the majority of the post-Great Recession era as only 2013 and 2015 saw gains for the time period in question since 2009.

Looking further back, that seasonal weakness has not necessarily been consistent though.  In 2009 and 2008, the rolling 10-year median performance sat at a polar opposite 1.3%. Looking back even further, that rolling median performance has frequently fluctuated between positive and negative performance, and is currently just bouncing off what were the most extremely negative levels in the post-WWII period.  Even after all the fluctuations, though, the median for all years since 1946 is still a negative 11 bps. In other words, while the past decade or so has been marked by seasonal weakness for the current week of the year, it has historically been far from a sure-fire bet, and as always, we would caution against purely investing based on seasonality. Click here to view Bespoke’s premium membership options for our best research available. 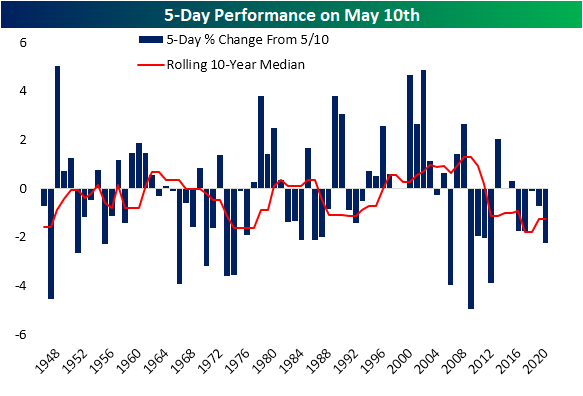