For most of the past year, one significant trend on a sector by sector basis has been the outperformance of sectors like Technology and Consumer Discretionary.  The relative strength lines of these sectors have consistently shown outperformance versus the rest of the S&P 500 as a whole, but since August, other sectors have begun to take the wheel.  As we noted in today’s Sector Snapshot, just about every sector has had a banner month in November with some of the biggest month to date rallies of the past 30 years, but some sectors have seen much larger returns than others.  One of the best examples of this has been Energy which has risen over 35% in November. Similarly, Financials has risen an astounding 19.5% this month compared to more modest but still significant rallies of around 10% from Tech and Consumer Discretionary.  Given those large degrees of outperformance, the relative strength lines of Energy and Financials have taken a sharp turn higher in recent weeks.  Similarly, they have seen a turnaround in their weightings in the S&P 500 as shown in the charts below.

Over the past three months, the Financial sector has gained a full percentage point weighting while the Technology sector has lost 1.36 percentage points with a decline in weighting in three straight months.  For Financials, that is the largest gain in weighting in a three month span since January 2017. For Tech, outside of the reshuffling in 2018 that saw a large share of its weight change into Communication Services, the last time the sector lost this much or more in weighting in three months was November of 2008.  Prior to this recent string of losing weight over the past three months, Tech had seen weight gain in every month from October of last year through August. Even though the weight loss has been significant, it has only put a dent in the increased share of the entirety of the past year as the sector’s weight is only back down to where it was in May.

Similarly, looking at the other sectors, while Financials have added a full percentage point in share over the past few months, that follows nine months of declines running from last December through August.  That brings the sector’s weighting back above 10% in the S&P 500, but that is only at the highest level since March.  Similarly, Materials and Industrials have also seen their weights rise for three and four months in a row, respectively. As for Energy, the 0.44 percentage point gain in November is set to snap six straight months of declines; the longest such streak since at least 1990.  As with Financials, that turn around this month has only put a dent in the longer term trend of weight loss as Energy’s weighting is now only back to its highest level since July. Opposite of Energy, Consumer Discretionary is on pace to lose weight for the first time since March.  Click here to view Bespoke’s premium membership options for our best research available. 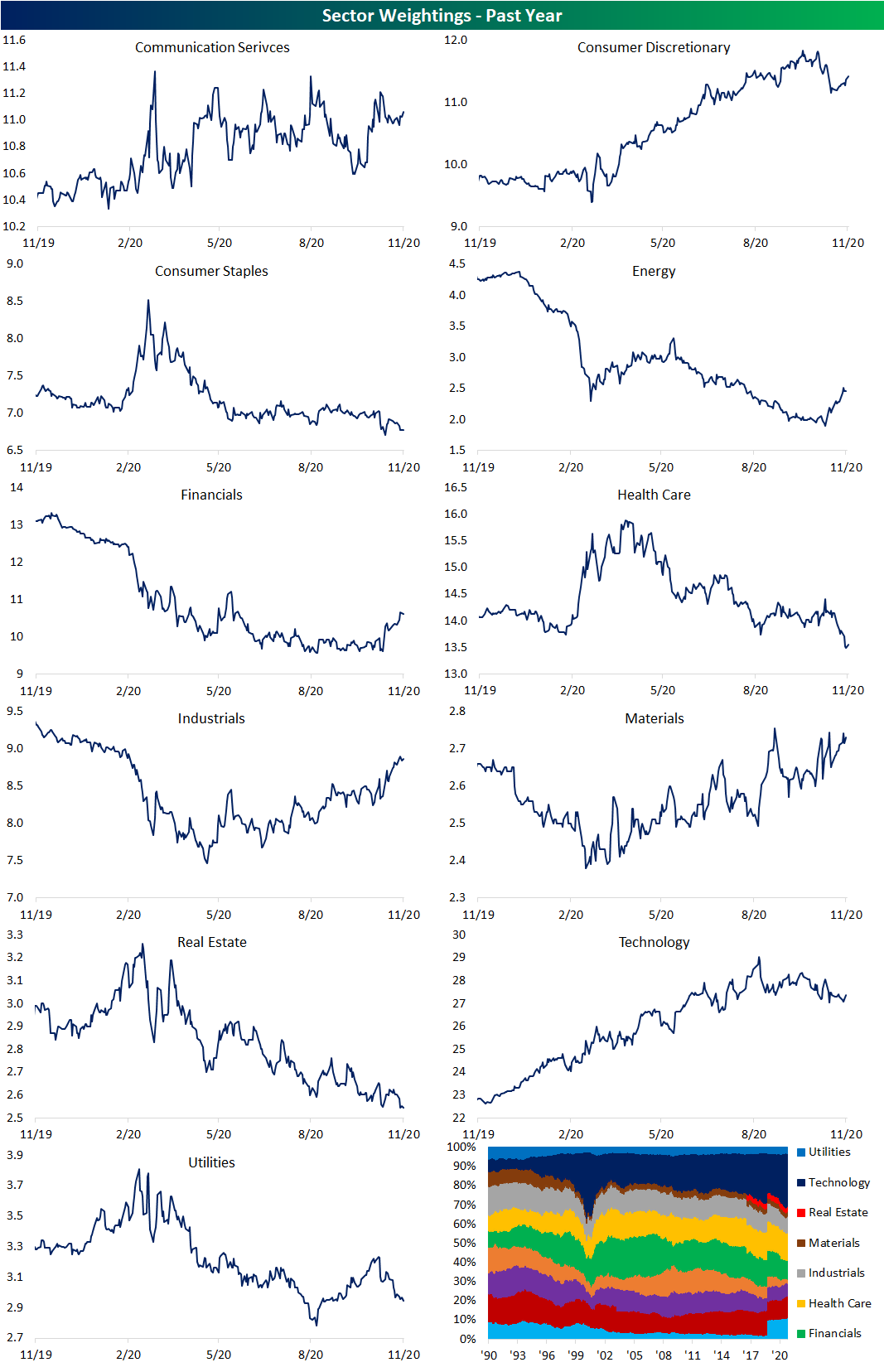