Whereas the Philadelphia Fed’s October reading on the manufacturing sector blew expectations out of the water, the New York Fed’s reading also released this morning was more of a dud on the headline level.  Unlike the Philly Fed which surged this month to the upper 5% of all readings, the New York Fed’s index fell more than expected and is much more modestly in the upper half of its historical range. The headline index was expected to fall to a reading of 14 from 17 last month, instead, it fell further down to 10.5.  Meanwhile, optimism has waned as the index for expectations six months out also declined and has now fallen in three of the last four months since its peak. That is not to say businesses are pessimistic and activity has not continued to improve though. These readings are still indicative of further improvements to business conditions but just at a slower pace than September, and expectations are still higher than they have been for much of the past couple of years.

Looking under the hood at the individual categories of the report, the picture is a bit better. New orders and shipments have continued to rise while lead times have fallen. Employment is also higher with a significant uptick in the average workweek.  Expectations are more negative as the outlook for demand and expenditures has weakened. These readings are also generally lower within their respective historical ranges. 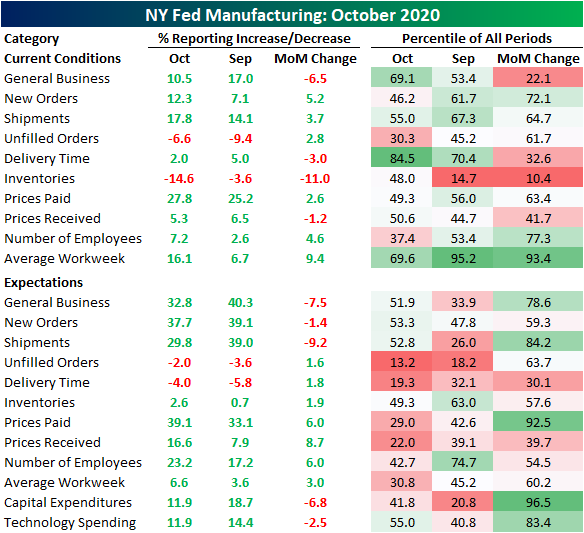 As mentioned above, demand remains solid with expansionary readings for New Orders and Shipments.  Both indices rose in October meaning New York area businesses are seeing an acceleration in demand.  Granted, the indices for expectations are moving inversely indicating that businesses are less optimistic for new orders and shipments in six months’ time even though current levels are growing.

Even though demand has not accelerated at any sort of historic pace as was the case for the Philly Fed, the continued improvement has meant inventories are quickly unwinding.  The index for Inventories has fallen to a fresh low of -14.6. That is the lowest level since November of 2016. Despite this, expectations are pointing to higher inventories six months into the future.

One of the strongest readings in this month’s report was the employment figures.  The index for Number of Employees has continued to climb with October marking a six straight month of gains. Rising to 7.2, the index is at its highest level since January.  There are also high expectations of future gains to employment six months out.  Average Workweek saw an even stronger reading.  That index rose nine points to 16.1 which is the highest level since May of 2011.  That signals a significant rise in hours worked in October.  Click here to view Bespoke’s premium membership options for our best research available. 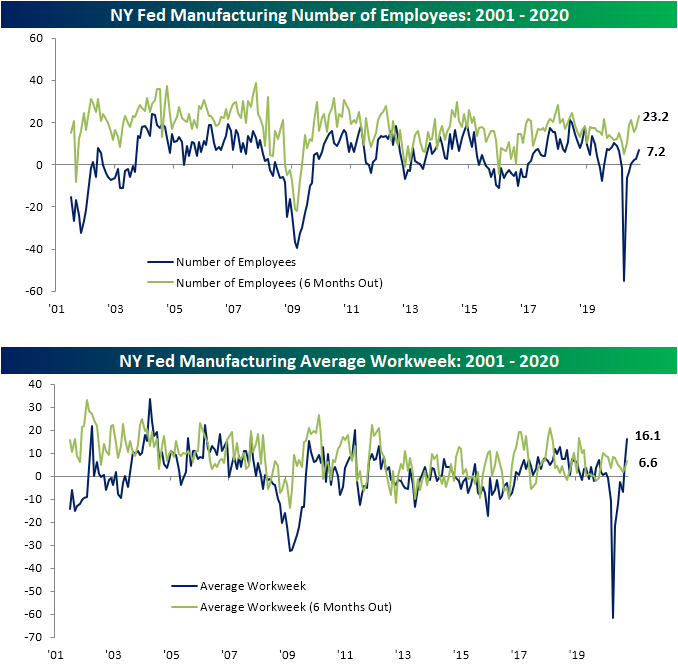