Due to the Thanksgiving holiday, it is a shortened trading week with no trading occurring Thursday and an early close on Friday.  As a result, trading volumes are bound to be light this week.  In the table below we show the average volume in SPY volume versus its 50-DMA for each calendar day of the year since SPY began trading in the early 1990s.  As shown in the bottom-most row, whereas the months in the first quarter of the year and October have been seen the most above-average volumes (relative to the 50-DMA), the year tends to close out on relatively muted volumes.  In November and December, volumes have averaged anywhere between 4.57% and 5.91% below the 50-DMA.  In other words, investors historically have been the most active at the start of the year, ramping up activity again in October before taking a step back around the holidays.

As previously mentioned, volumes in November are notably weak and the time surrounding Thanksgiving is no exception.  Thanksgiving can be anytime from November 22nd through the 28th, and as highlighted below, these are some of the days with the lowest volumes of the year. Similarly, the days surrounding Christmas and leading up to New Year’s have been the period of weakest volumes of the year. 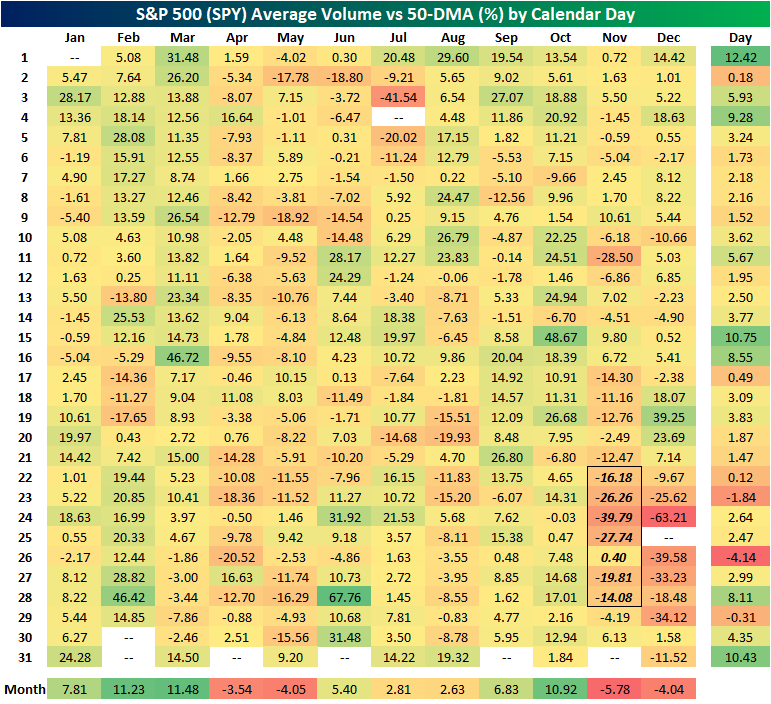 Some of these weak volumes account for simply less time with the market open given the half-days the day after Thanksgiving and on Christmas Eve, but even still, these are both generally quiet times for the market.  In the table below, we show a more granular look with volumes versus their 50-DMA during Thanksgiving week. As shown, since 1993 when SPY began trading, less than a fifth of days during the week of Thanksgiving have seen volumes that were above the 50-DMA. While Monday and Wednesday see significantly smaller volumes, Friday’s shortened sessions understandably result in volumes being less than half what is the norm.   We’d also note that the much stronger than average volume in SPY on the Friday after Thanksgiving in 1993 was partially a result fo the fact that it was the first year of the ETFs existence and it wasn’t nearly as ubiquitous of a trading tool as it quickly became in subsequent years. Click here to view Bespoke’s premium membership options for our best research available. 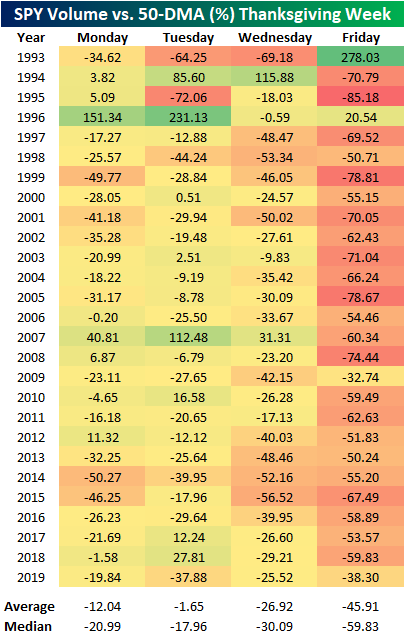