The past couple of weeks had seen some rumblings that one of the newest additions to the Dow, Salesforce.com (CRM), was in talks to buy Slack (WORK).  On Tuesday, the deal was officially announced to the public with the transaction valued at approximately just over $25 billion. The deal is set to be CRM’s largest acquisition to date, surpassing last year’s $14 billion acquisition of Tableau Software.  While that would nearly double the previous record-sized acquisition for the company, there have been several other acquisitions valued at more than $1 billion at the time of the announcement. 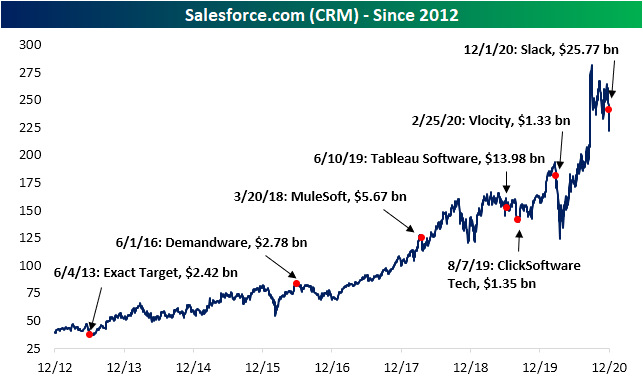 The announcement concerning Slack is CRM’s seventh acquisition with a value of at least $1 billion, and it is the second such deal of 2020 after software company Vlocity was taken on back in February. Additionally, while the announced deal with Slack is the largest in terms of dollars, as a percentage of CRM’s market cap it is actually roughly in line with the Tableau acquisition and will be slightly larger than the deal with Exact Target in 2013.

As for these past deals, a negative reaction in the stock price of CRM has very much been the norm one week after the deal was announced.  As CRM has fallen over 9% in today’s session, it is already on pace to see the worst stock price reaction since the announcement of a deal with MuleSoft in 2018.  While positive returns have come down to a coinflip one to three months later, in the times the stock has rallied, the gains have been double digits. Additionally, six months out has consistently seen Salesforce higher with an average gain of over 20%.  Click here to view Bespoke’s premium membership options for our best research available.