Russia (RSX) Falling Off the Table

As it is the last Wednesday of the month, earlier today we published our Global Macro Dashboard offering a glance at the economic and market data of 22 major global economies. Looking across the US-listed ETFs tracking each of these country stock markets, it should come as no surprise as to which country currently finds itself at the bottom of this list, and it isn’t even close: Russia (RSX). RSX is now down 42% from its 52-week high set back in October and is down 27.59% year to date.  That leaves the ETF over three standard deviations below its 50-DMA, but only one week ago, it was actually above its 50-DMA!

As for the rest of the countries tracked, half are oversold with multiple others including Germany (EWG) and China (MCHI) over two standard deviations below their 50-DMAs.  The United States (SPY) actually ranks as the third-worst country of these with regards to year-to-date performance.  Brazil (EWZ), South Africa (EZA), and Malaysia (EWM) are overbought and sitting on some of the largest (and only) year-to-date gains. 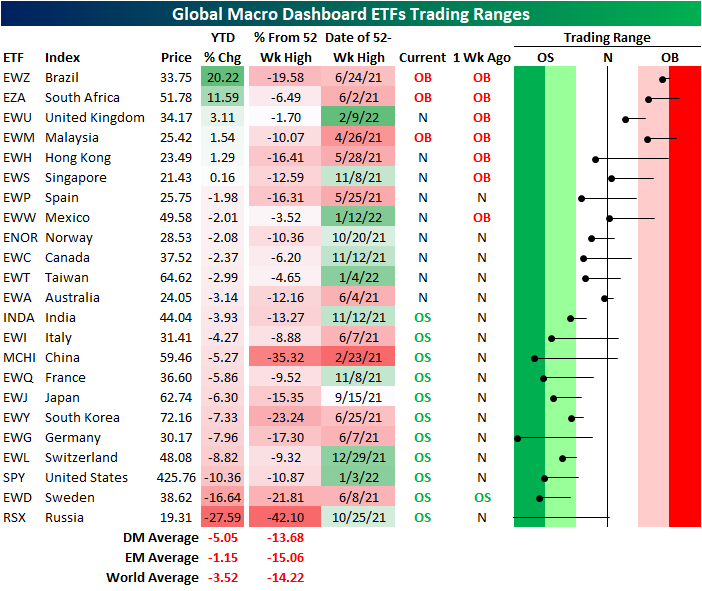 The BRIC countries find themselves on opposite ends of the spectrum of performance. While RSX and MCHI are at or close to 52-week lows, and India (INDA) is near multi-month support, Brazil (EWZ) is sitting on a sizable 20% YTD gain. That being said, it also still remains nearly 20% below its 52-week high set last spring even after the massive rally this year.  Taking a look at the chart of RSX, it has been in a downtrend since last fall, and right before the Ukraine episode began, it was actually looking like it had a chance to break out as it ran up to its 50-DMA.  After failing to move above that moving average coincident with rising geo-political tensions, RSX has absolutely fallen off the table over the last couple of weeks. 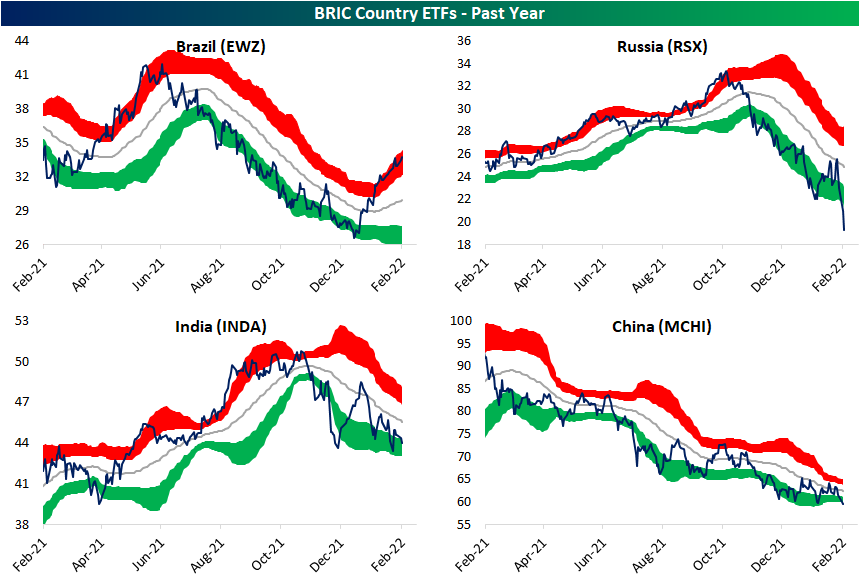 As for just how steep of a drop RSX has faced, the ETF has shed 23.42% in the past five sessions alone. Since the ETF began trading in the mid-2000s, there have only been a handful of other periods in which it has fallen by as large of a degree in only five days.  The most recent of these was in the spring of 2020 at the onset of the pandemic. While the decline wasn’t as large as now, 2014 was another period that saw RSX fall over 20% in five days as geopolitical tensions arose in Ukraine. 2008 and 2011 were the only other periods prior to that in which RSX has experienced such a large decline in as short of a span.  Click here to view Bespoke’s premium membership options. 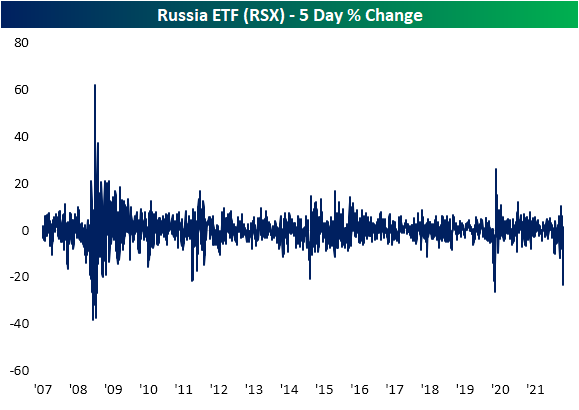