The massive declines in equities this week has sent the major indices reeling in their respective trading ranges as shown in the snapshot of our Trend Analyzer below.  Every major index ETF is now extremely oversold (2 standard deviations or more below their 50-DMA) with the exception of the Nasdaq 100 (QQQ).  That compares to one week ago when just about everything was overbought, some to nearly extreme degrees.  One interesting point concerning the Nasdaq is that despite having fallen the most in percentage terms over the past week, it is the only index that entered today up on the year and it remains the least oversold of these index ETFs.  While perhaps not to the same degree as QQQ, another dynamic worth mentioning is that small and mid-cap indices are much more oversold than large caps. 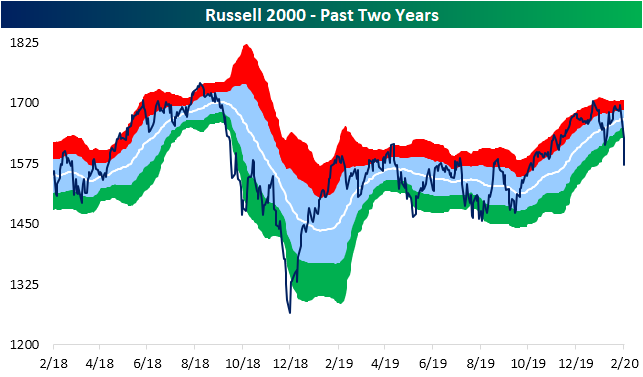 This is only the sixth day in the index’s history that it had gotten this oversold.  The last time this happened was in August 2011.  Prior to that there was one occurrence in August 1990 and another cluster of three days in during the October 1987 crash.  Performance following these prior instances have been very mixed.  While the 1987 and 1990 instances were followed by severe declines in the Russell 2000 over the next few months, more recently in 2011 performance was very strong over the next year. Join Bespoke Premium to access Bespoke’s most actionable stock market research and analysis.  Start a two-week free trial now! 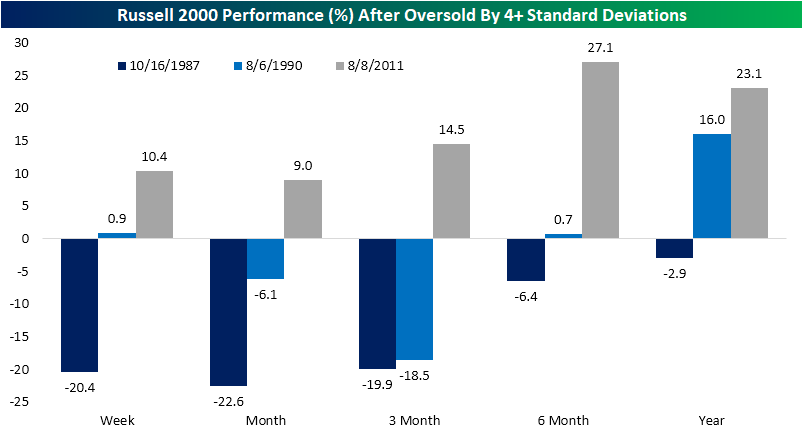