While US large cap stocks are right around 30% from their record highs a month ago, the carnage in small caps has been even more severe.  While the Russell 2000 never quite made a new high this year along with the broader market, it got pretty close.  Like the rest of the market, though, it has been crushed.  As of yesterday’s close, the Russell 2000 was 43.1% below its all-time high which ranks as the third-largest decline from a record high.  The only two periods where the Russell saw a larger decline were in October 2002 when the drawdown reached 46.1% and then in March 2009 when the selling finally stopped at 59.9% on March 9, 2009.  Now, if the Russell 2000 were to match either of those prior two periods in terms of magnitude, it would have to fall an additional 4.3% to match the decline of October 2002 or 28.9% to match the decline of March 2009. Start a two-week free trial to Bespoke Institutional for full access to our market and economic analysis. 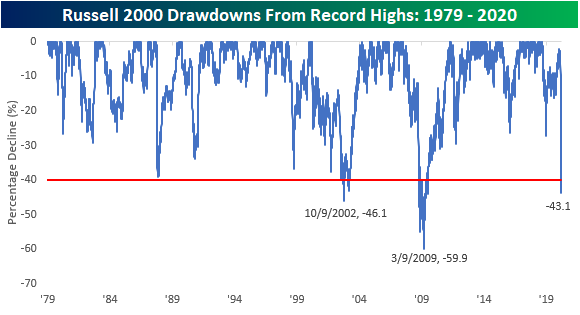