Run For Cover: CPI On Deck

Tomorrow is the day everybody has been waiting for as CPI for the month of May will hit the tape at 8:30 AM eastern.  The fact that people have literally been talking about this report for the last several days illustrates how much of an issue inflation has become for the market over the last six months since Fed Chair Powell first started to take a more hawkish approach to inflation.  For a market concerned about inflation, recent reports certainly haven’t been soothing for investors.  Over the last 24 months, there have been just three months where headline CPI has come in weaker than expected (6/10/20, 11/12/20, and 9/14/21).  Ironically enough, on each of those three days, the S&P 500 actually traded lower, although to be fair, all three of these reports were before Powell ditched the term transitory. 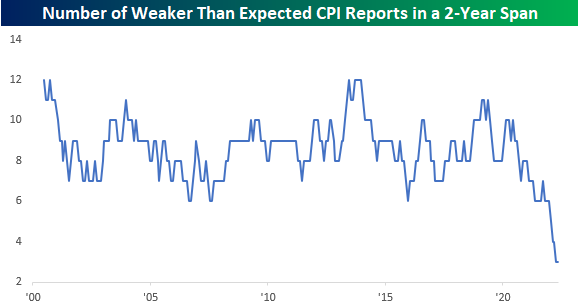 Although CPI reports over the last two years have been coming in either higher or in line with expectations, market performance on these days has been right around the flatline with a median decline of 0.08% for the S&P 500 with positive returns 11 out of 24 times. 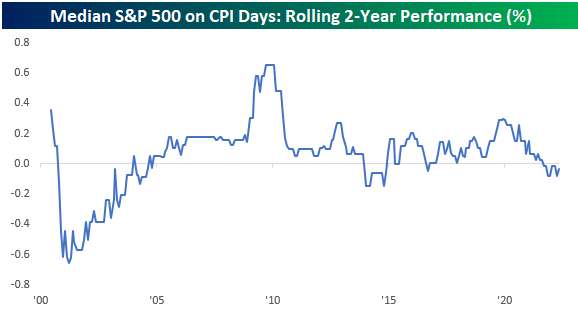 While median returns for the S&P 500 have been right around the flatline over the last two years on CPI days, more recent returns have been much weaker.  Since Powell ditched ‘transitory’ in late November, the S&P 500 has declined on the day of the CPI report four times (the last four reports).  Over the last six months, the S&P 500’s median performance on CPI days has been a decline of 0.18%.  On an individual sector basis, Energy (surprise!) has been the best performing sector with a median gain of 1.1%, while Technology’s median performance has been of the same magnitude but in the opposite direction.  Along with Technology, Financials and Communication Services have both faced declines of 0.8%. Click here to learn more about Bespoke’s premium stock market research service. 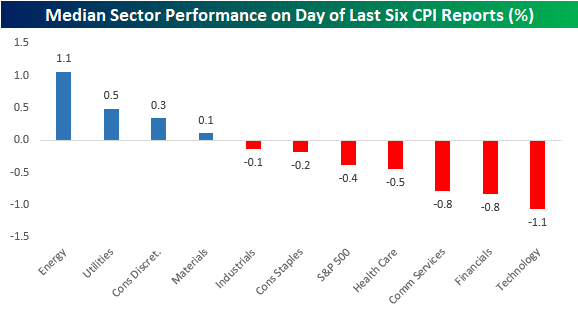