Over the last few days, we’ve been seeing a moderate rotation in the market as red-hot growth stocks sell-off and investors shift into other areas of the market that have been lagging.  To highlight this, the table below highlights 24 companies in the Russell 3,000 with market caps of more than $1 billion that traded at a 52-week high within the last month but are currently down more than 20% from that high. The vast majority of these stocks are names that investors haven’t been able to get enough of in 2020 but now appear to have had their fill.

Topping the list of these reversals is Eastman Kodak (KODK).  On 7/29, the stock surged to a 52-week high of $60.00 after being awarded a questionable government contract to domestically produce components for prescription drugs.  With the SEC and government agency that originally awarded the contract now looking into stock option awards at the company just before it was announced, the stock has pulled back sharply and is now down over 80% from its high less than two weeks ago.

While KODK is more of a unique example, other names on the list are primarily growth or health care stocks that have benefited from the COVID outbreak. However, now that signs suggest the summer wave in the south has crested, investors appear to be taking some profits.  Shares of Vaxart (VXRT) hit a high of $17.49 on July 14th but have since lost nearly half of their value and trade back in the single-digits.  Additionally, Bloom Energy (BE), 1Life Healthcare (ONEM), and Bioxcel Therapeutics (BTAI) have all lost more than a third of their value.

In terms of market cap, most of the names listed are on the small side, but Tesla (TSLA) is a notable exception as it is now just over 20% below its 52-week high on 7/13.  Other relatively large companies on the list include Moderna (MRNA), Citrix Systems (CTXS), Teladoc (TDOC), and Livongo (LVGO).  TDOC and LVGO both hit all-time highs last week but after announcing a mostly stock merger last Wednesday, both have lost nearly a quarter of their value.

While all of the stocks listed below have seen sharp pullbacks in the last several days, a little perspective is in order.  Of the 24 names listed, the average YTD change even after the declines has been a gain of 219.7% (median: +94.6%).  Only two of the stocks shown (New Relic- NEWR and Sonos- SONO) are down YTD, and half of them have at least doubled and in many cases much more.  Click here to view Bespoke’s premium membership options for our best research available. 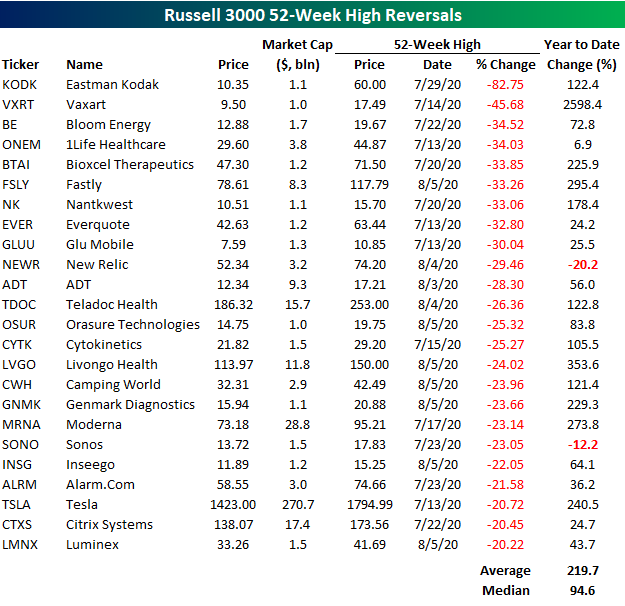