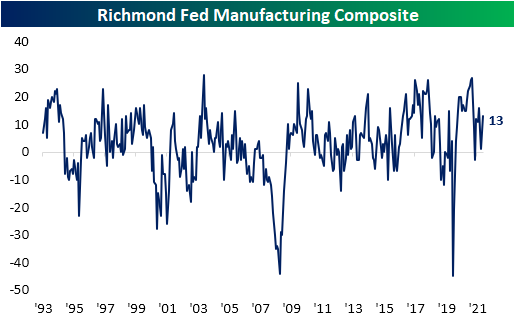 The one-month swing in the composite index was on the large side relative to the report’s history.  The 12 point month over month gain ranks in the 90th percentile of all monthly moves bringing the index from the low end of its historical range (35th percentile) to the upper end (79th percentile).  Given the large increase, breadth in this month’s report was strong across categories with a majority of categories seeing significant month over month increases. Expectations, however, were generally more dour. 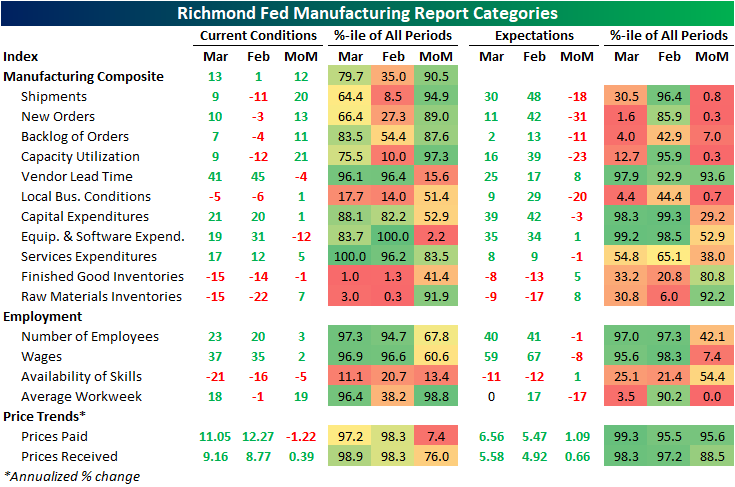 Quantifying just how wide of a difference there was in the changes of current conditions and expectations, in the chart below, we show the average spread across each categories month over month change in the current conditions versus expectations indices.  In other words, more positive readings would mean current conditions are rising much more rapidly than expectations and vice versa for more deeply negative readings.  This month’s reading was the second-highest reading on record outside of March 2020. In other words, this month’s report saw a historic disconnect between the moves in readings on the present situation versus the future outlook. 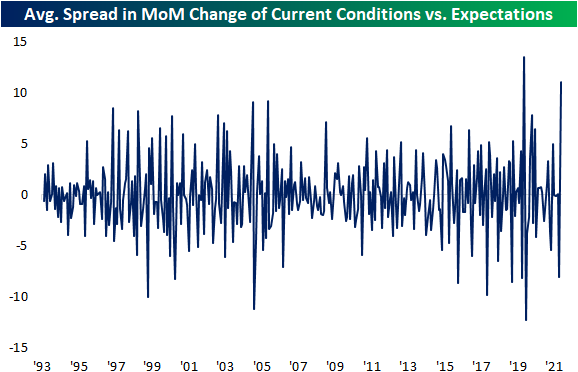 Whereas the February report saw new orders contract alongside order backlogs and shipments, this month, each index saw a sizeable rebound.  New orders grew at a healthy rate as the index rose to 10 and the shipments index is now in a similar area of its historical range after an even larger monthly increase.  In fact, one month after one of the largest monthly declines on record for the index, this month’s 20 point gain came up just short of a top 5% monthly increase.  Given the strength in new orders, order backlogs also rose while supply chain stress showed further signs of easing as the vendor lead times index fell to 41.  While still above December’s low, it marks a significant improvement from October’s high of 67.

Although there were broad improvements in the current condition indices for these categories, expectations were far weaker.  The expectation indices for New Orders, Shipments, and Order Backlogs experienced declines ranking in the bottom few percent of all month-over-month changes on record.  Similarly, vendor lead times saw a top decile month-over-month gain.  In other words, Richmond area manufacturers do not appear to expect the improvement in conditions to carry through over the next several months. 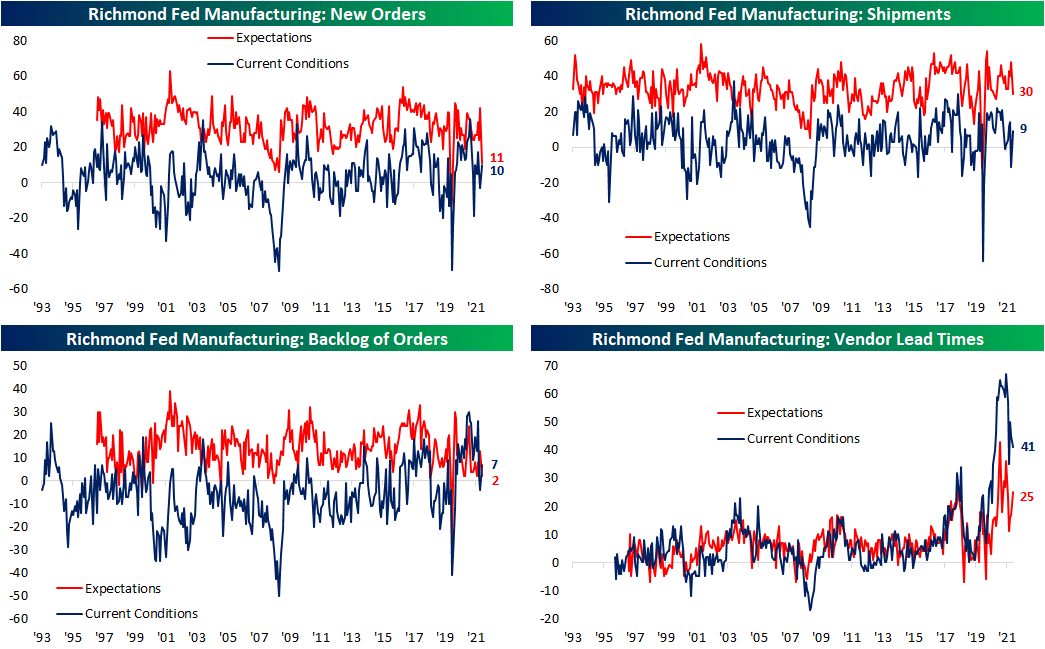 Likely as a result of the abating number of COVID cases, employment metrics improved in March.  Firms reported taking on more workers and raising wages at a higher rate. Meanwhile, the length of the average workweek saw a huge 19 point rebound back into positive territory.  Firms also reported it was harder to find workers with necessary skills, though, that reading remains significantly improved from record lows set a little under one year ago. We would also note, while demand metrics saw big declines and much weaker levels of expectations indices, expectations indices for employment categories continue to sit at much more historically elevated levels even in spite of some modest declines in March. 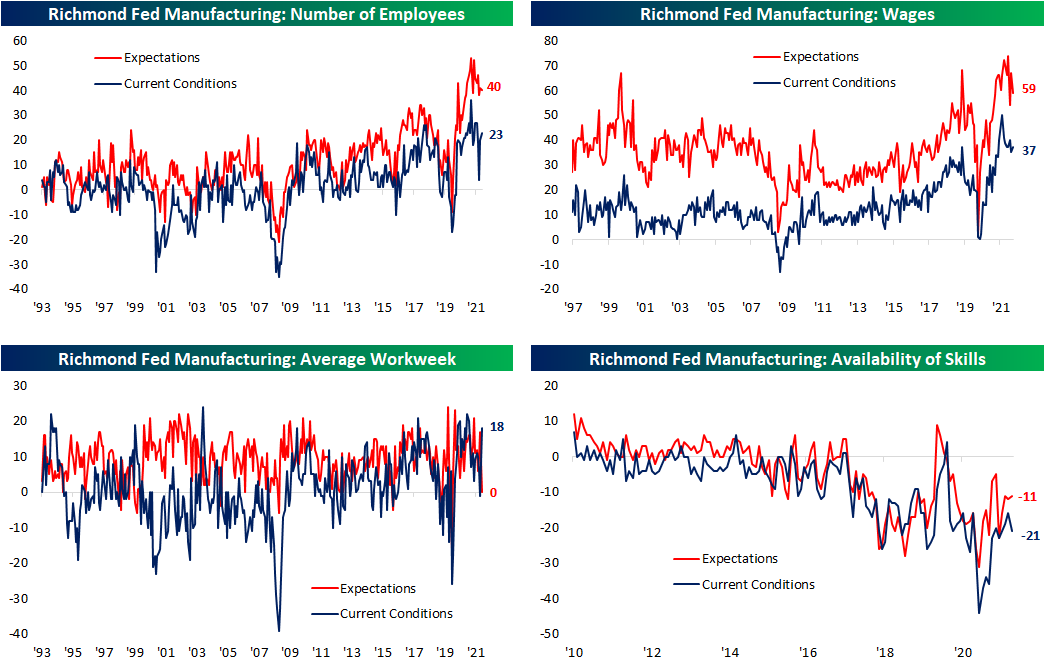 Manufacturers continue to report massive price increases relative to other periods in the survey’s history. Prices paid were reported to have risen at an 11.05% annualized rate and prices received rose at a 9.16% clip.  While elevated, both readings are still off their January peaks.Click here to view Bespoke’s premium membership options. 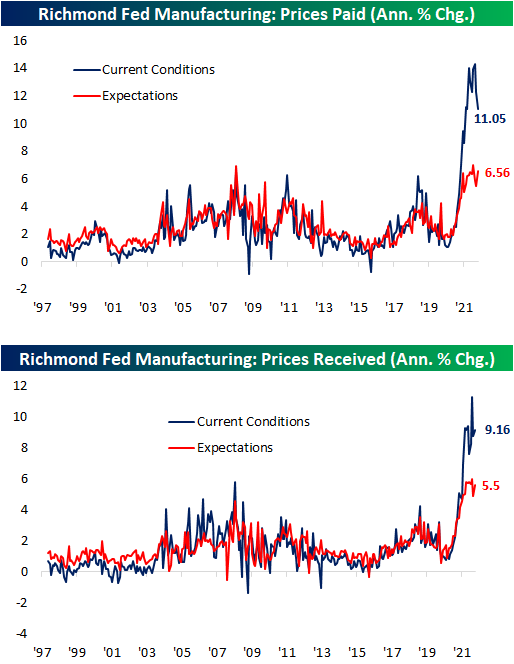