After a record high of 29 last month, the Richmond Fed’s monthly reading on the manufacturing sector was expected to decline. Rather than the drop to 20 that was forecasted, this month’s decline left the index even lower at 15.  The 14-point month-over-month decline is the largest since the spring and tied January of 1999 and April of 2004 for the sixth-largest monthly decline in the index’s history. Considering that historically large decline is coming off the record high, though, the November reading is still consistent with further improvements in the district’s manufacturing sector just at a decelerated rate from October. 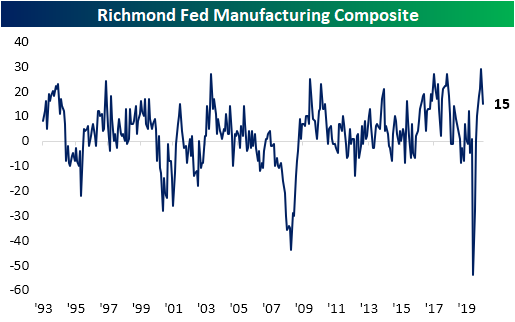 Given the large decline in the headline index experienced, breadth in this month’s report was notably weak.  Across the 17 different sub-indices, all but four turned lower this month.  As shown in the table below, similar to the composite reading, some of those declines were in the bottom 5% of all month over month changes on record for those respective indices. Granted, for several indices, those large declines come from historically elevated levels.  As for those indices that managed to avoid a decline, Service Expenditures went unchanged, Raw Material Inventory declines decelerated, and prices paid and received both rose. Again though, the bulk of these readings were still indicative of expansionary activity but at a slower rate than the prior month. 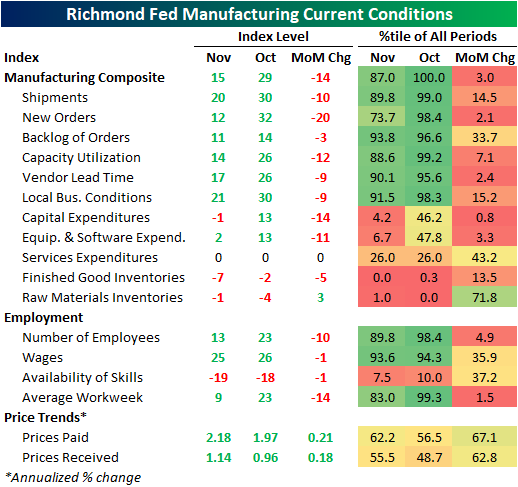 While current conditions broadly showed deceleration, expectations were more optimistic.  There were still a handful of indices for future expectations that declined this month—with those for Finished Good Inventories, Wages, and Availability of Skills the most significant decliners—but generally speaking outlook has continued to improve. 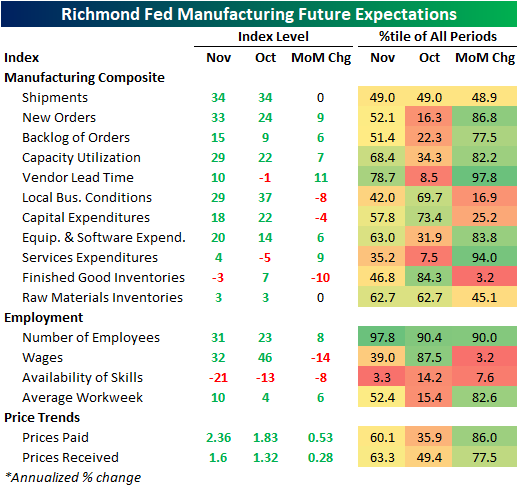 While still consistent with gains in new orders, the growth rate moderated significantly in November as the index dropped 20 points from a near-record high of 32 down to 12. Whereas the decline in November resulted in most other indices staying at the high end of their historical ranges, new orders is less elevated from a historical perspective only in the 73rd percentile. Similarly, the backlog of orders continues to grow but at a slower rate.  Granted, the deceleration of order backlogs was much smaller than new orders in November as the index only dropped 3 points down to 11 which is still in the upper decile of all readings. 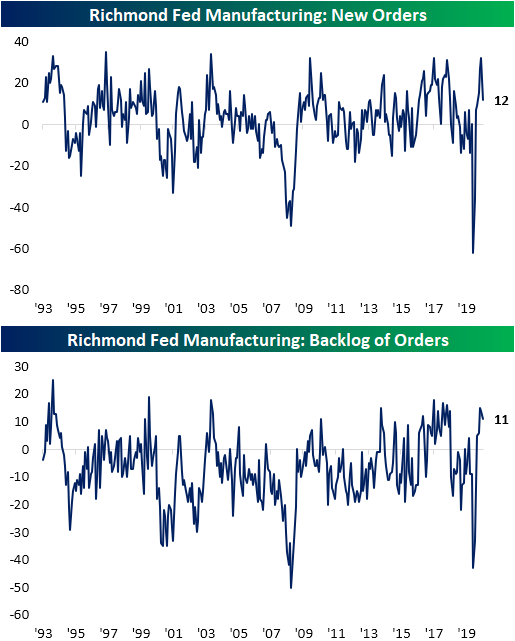 Given orders are still growing, inventories continue to be drawn upon at a rapid rate.  In terms of raw material inventories, this month saw a contraction for just a fourth time in the history of the survey. Three of those contractionary readings have come from the past three months with last month’s reading a record low.  Finished good inventories on the other hand are being drawn upon at a more rapid rate.  That index fell 5 points this month to a record low of -7. 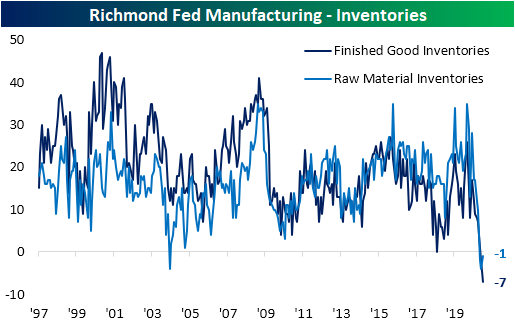 Other than the indices for inventories, those covering expenditures are the other indices that remain at historically low levels.  This month saw sizable declines for Capital Expenditures and Equipment and Software Expenditures with the reading of the former consistent with more firms reducing spending rather than increasing. In other words, broadly speaking companies are not increasing spending on capital like they were a few months ago. 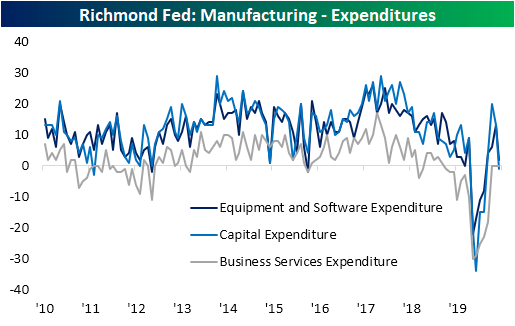 While that side of the production function has weakened, employment metrics are a bit healthier.  As with the rest of the survey this month, these readings were consistent with decelerations, but overall manufacturing firms continue to increase hiring, wages, and workweek while they also report a lack of workers with in-demand skills. 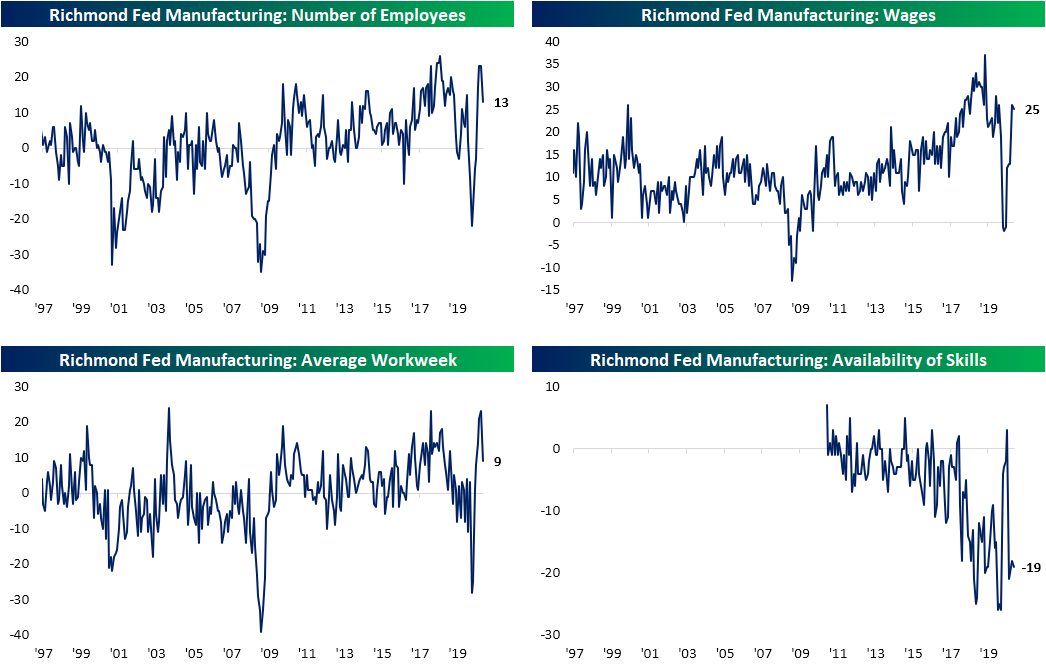 Not only are wages rising but so too are Prices Paid and Prices Received with the former outpacing the latter. Click here to view Bespoke’s premium membership options for our best research available. 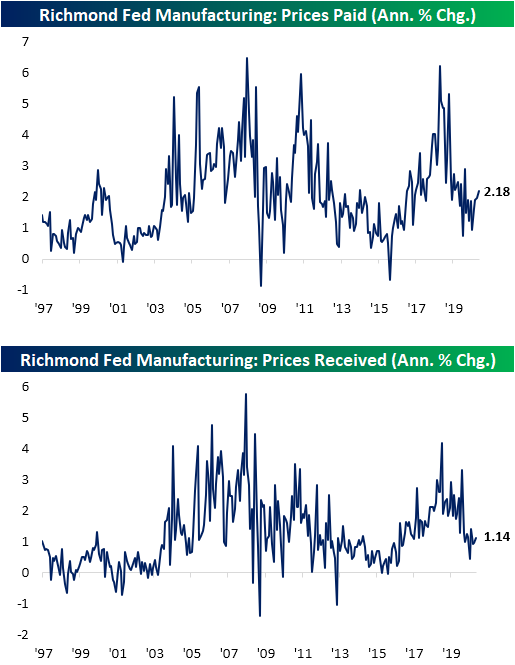