Richmond Fed Back to Positive

Like yesterday’s Dallas Fed reading, the Richmond Fed’s Survey of Manufacturing Activity experienced a larger than expected bounce this month as the headline reading rose from -3 to 12. That compares to expectations of a modest increase to only 5.  October’s bounce has helped to recover a decent chunk of the steep drops from August and September. 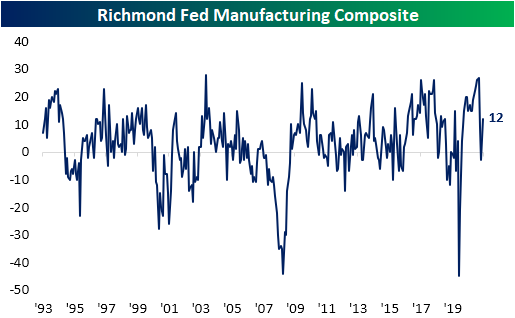 The rise in the composite reading was thanks to broad increases across the report.  The only indices that declined month over month were those of Equipment and Software Expenditure, Raw Materials Inventories, Wages, and Prices Paid. Whereas there were several indices in contraction last month, most moved back into expansionary territory. 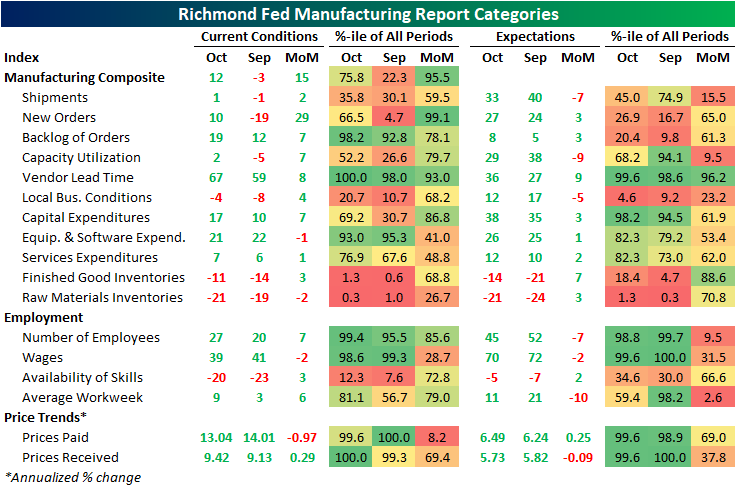 By far the most impressive increase this month was in New Orders.  Last month, the index plummeted into the bottom 5% of readings, but after a 29 point increase (which ranks as the fourth-largest monthly gain on record), it is back in positive territory. That was met with a solid uptick in Order Backlogs, but the Shipments component remains much more muted and barely positive.  That is likely due to supply chain delays as the index for Vendor Lead Times set a new record high. 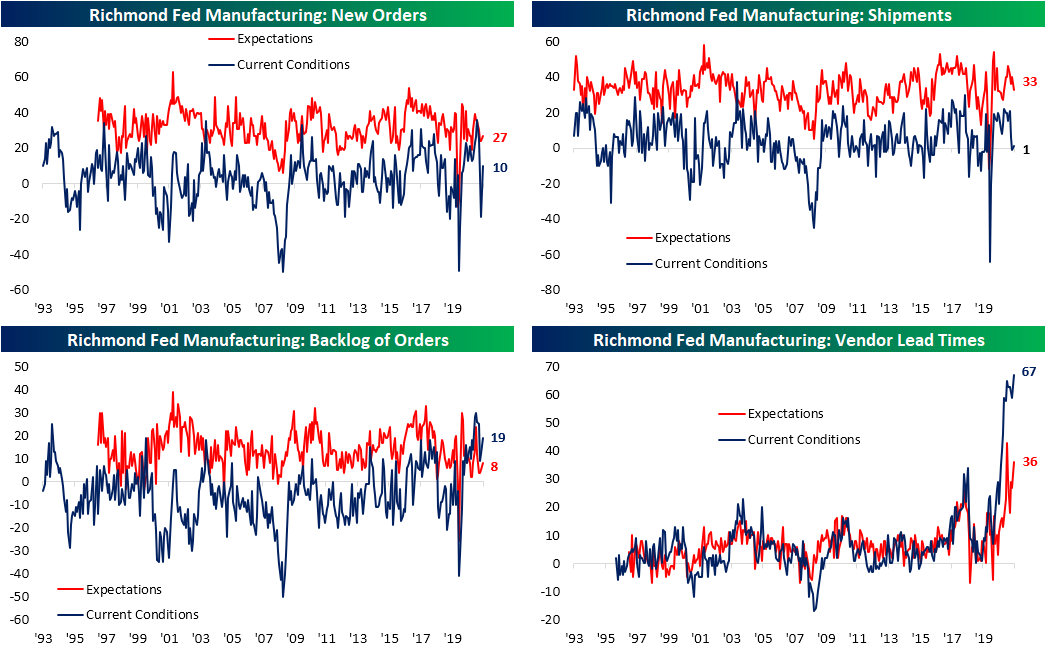 Another issue tied into low shipment growth and delays is rapidly declining inventory levels for both inputs and finished goods. While the former saw a modest bump this month, both indices are only slightly above record lows. 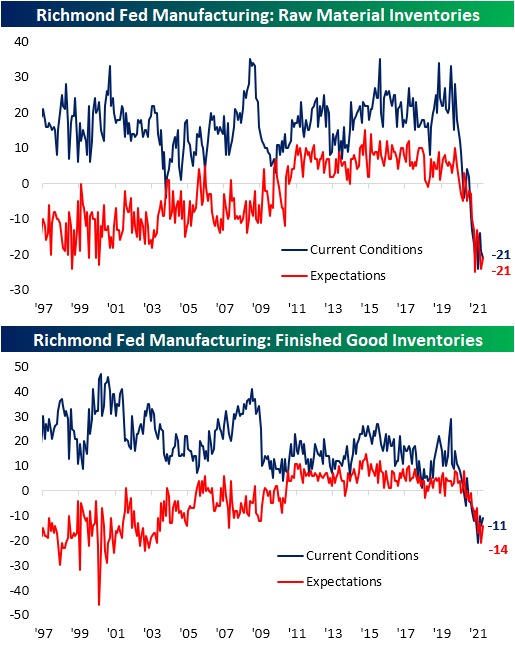 Price indices remain at historic levels and like the indices for inventories, the index for input prices moved lower in October while Prices Received set a new record high at 9.42% annualized. The expectations indices for these two categories saw the opposite results with a new high in Prices Paid and a small decline in Prices Received. 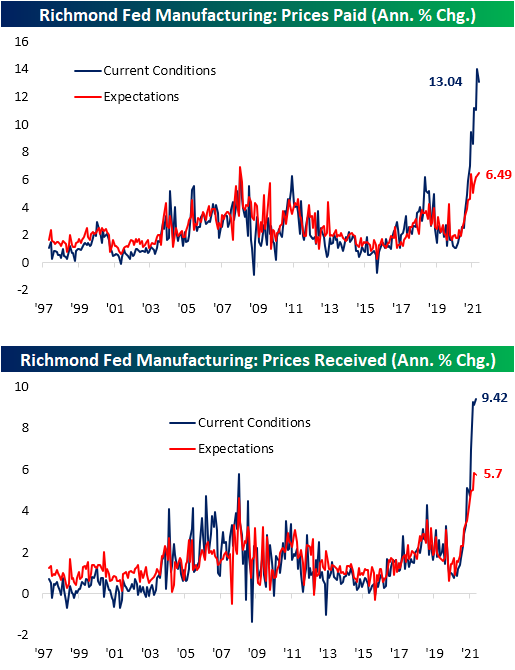 Employment indices were generally stronger in October with upticks in the Number of Employees, Average Workweek, and Availability of Skills.  For the Number of Employees, although the current reading is off the peak, it is still above anything observed prior to the pandemic. The same can be said for Wages while the Availability of Skills is back within the range that was in place in the few years leading up to the pandemic. Click here to view Bespoke’s premium membership options. 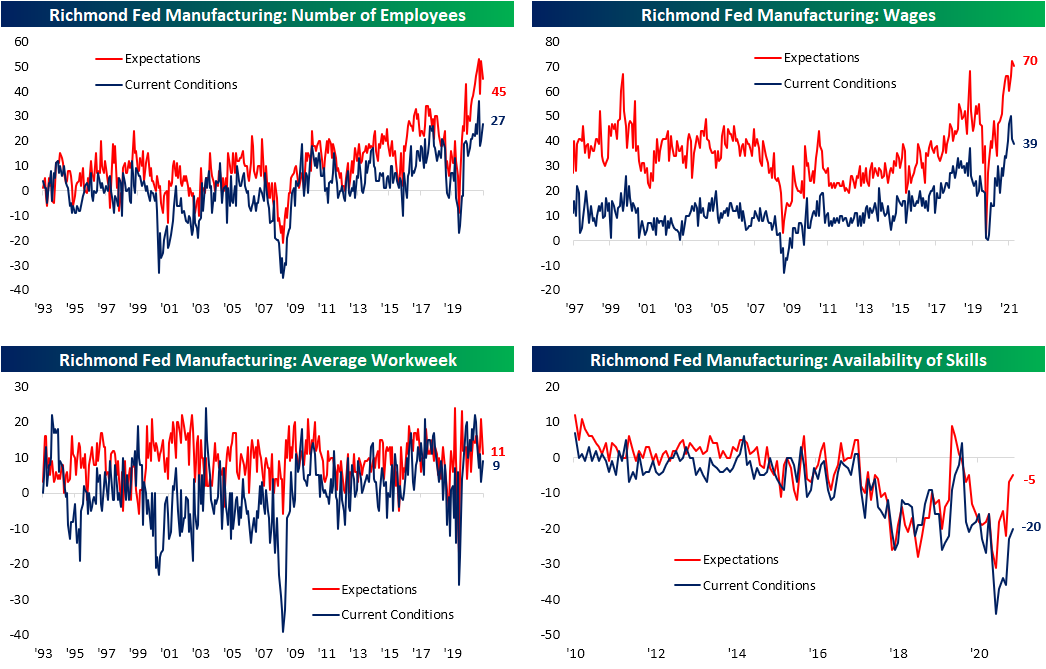